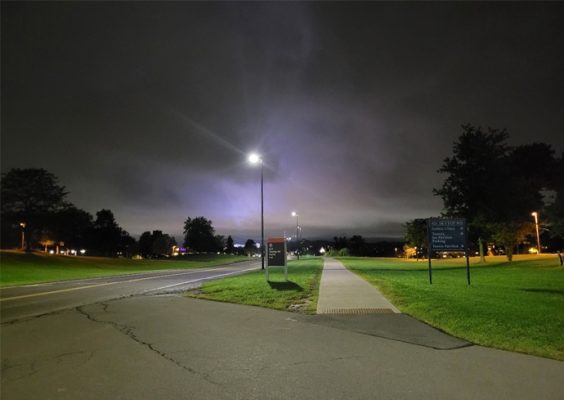 These upgrades will lower power consumption, thereby reducing the amount of greenhouse gas emissions, a direct contributor to a warming planet. The new lights will result in a total reduction of 68.09 metric tons of carbon dioxide equivalent per year. This amount is equal to the estimated greenhouse gas emissions from more than 14 gasoline-powered passenger vehicles driven in one year or eight homes’ energy use in a single year.

With more efficient lighting in these areas, the University will save 640,213 kilowatt hours of electricity annually. This is more than the amount of electricity the Hall of Languages building consumes in a year.

At left, the Syracuse University Soccer Stadium is illuminated by old metal halide lights. The new LED lights can be seen at right.

Because of the improved efficiency, the number of light bulbs needed for the soccer stadium was nearly cut in half. Previously, there were 74 metal halide fixtures installed but with the new LED bulbs, only 38 were needed to provide enough lighting. The lighting quality and uniformity are also improved on the field. The old lighting fixtures produced a variety of light levels while the new light levels are much more uniform, making it easier for players and fans to see.

“The addition of the LED lights to the soccer stadium are a great benefit to our student-athletes and fans to support the game environment,” says Morey Mossovitz, associate athletic director. “Additionally, these lights have enhanced our broadcast partner’s ability to capture the game so that ’Cuse fans all over the world can have an even better experience watching our men’s and women’s soccer teams.”

In the Comstock Avenue and Colvin Street parking lots and on South Campus, there were previously 700 lighting fixtures—but with the new LED, there will now be 678. The previous lights were high-pressure sodium fixtures using 250-watt bulbs, whereas the replacement bulbs only use 101 watts per bulb.

The Comstock Avenue parking lot before (left) and after lighting upgrades. The yellow/orange lights are old sodium pressure ones, while the whiter lights are LED.

Another added benefit is improved lighting quality and color. The previous lighting had an orange hue while the new ones are brighter and whiter, making it easier to see at night, providing an added safety measure for students.

“These lighting upgrades will help us to advance the University’s climate action plan and reduce power consumption, all while providing more uniform lighting in these areas of campus,” says Jason Plumpton, assistant director of engineering, utilities and sustainability in Campus Planning, Design and Construction. “It is a win-win-win for the University, and members of the community can expect to see lighting upgrades across campus continue to help us meet our sustainability objectives.”