The voice inside Milton Santiago’s head eventually became too loud for him to ignore.

After graduating from Canisius College in Buffalo with a degree in communication studies and English, Santiago landed a job as a production assistant for Sundance Channel in New York City. Santiago received his first look at how the television production world operated, and eventually, through hard work and dedication, was promoted to the role of producer. 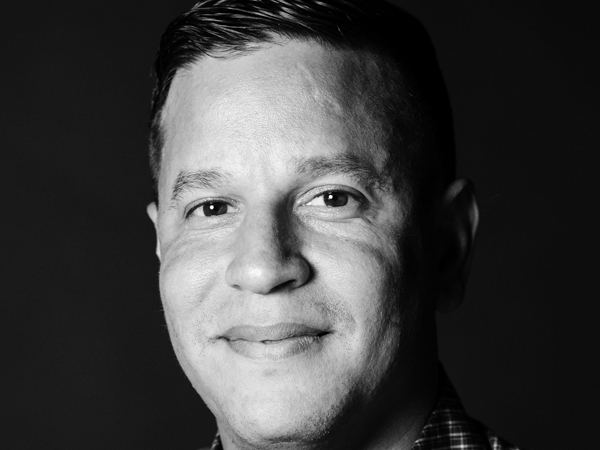 Milton Santiago is an assistant professor of visual communications in the Newhouse School.

He traveled to the prestigious Sundance Film Festival in Park City, Utah, chatting up filmmakers from all genres. While he was enjoying his career, he felt there was something missing, and that he wasn’t following his true calling.

That’s when the familiar voice inside his head picked up in intensity.

While the voice was strong, so, too, were the fears that Santiago says are common among aspiring filmmakers: the fear of being on a professional set. The fear of making a mistake before a large team of professionals, despite being well-trained and well-versed in the requisite skills.

Those fears can derail careers, but thankfully Santiago pushed past the fear, and today, he is fortunate to have enjoyed a more than 15-year career as a content creator and director of photography, working on feature films, documentaries, corporate and industrial videos, music videos and web content.

Santiago, an assistant professor in the Newhouse School’s visual communications program, knows all too well the powerful hold that fear can have on a student, and he’s doing his part to pull back the curtain and reveal the secrets behind the filmmaking industry to as many Syracuse University students as possible.

Over the summer, Santiago oversaw three projects across the country that aimed to introduce students to the world of filmmaking while deconstructing the myths that exist about working on a set, striving to make the experience more accessible to those looking to follow his professional path.

“My journey to becoming a professional filmmaker was completely facilitated by professionals I met along the way who were willing to let me be in the room while productions were being made. There’s no substitute for the experiential learning that can happen on set. It’s tantamount as educators who still have one foot in the industry to make this as accessible as we can for our students,” says Santiago. 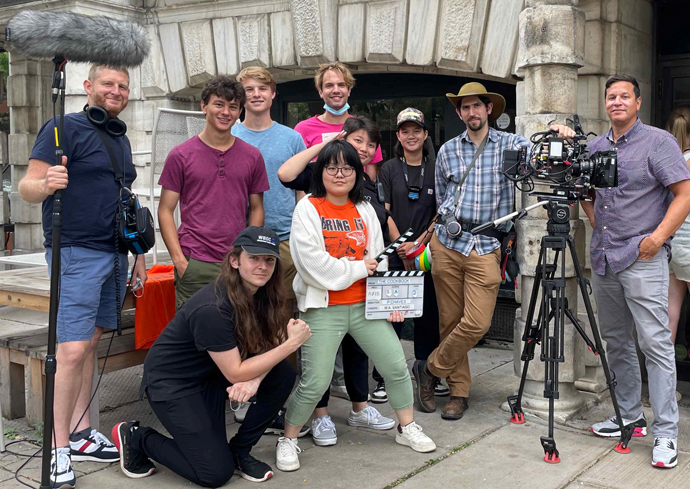 Newhouse professor Milton Santiago posing with his students who helped with the production of “The Cookbook,” a short film shot in Syracuse.

After taking the leap and leaving behind his producing role, Santiago received a master’s degree in fine arts in motion picture production/cinematography from the University of Miami in Coral Gables, Florida, in 2005. As a graduate student, Santiago shot more than two dozen film projects, which led to an Academy of Television Arts and Sciences apprenticeship in cinematography with James Chressanthis, who at the time was working on the CBS show “Ghost Whisperer.”

The year-long apprenticeship gave Santiago the confidence to cross over from producing to filmmaking while opening doors and serving as a “master class” that fueled his passion for shooting. 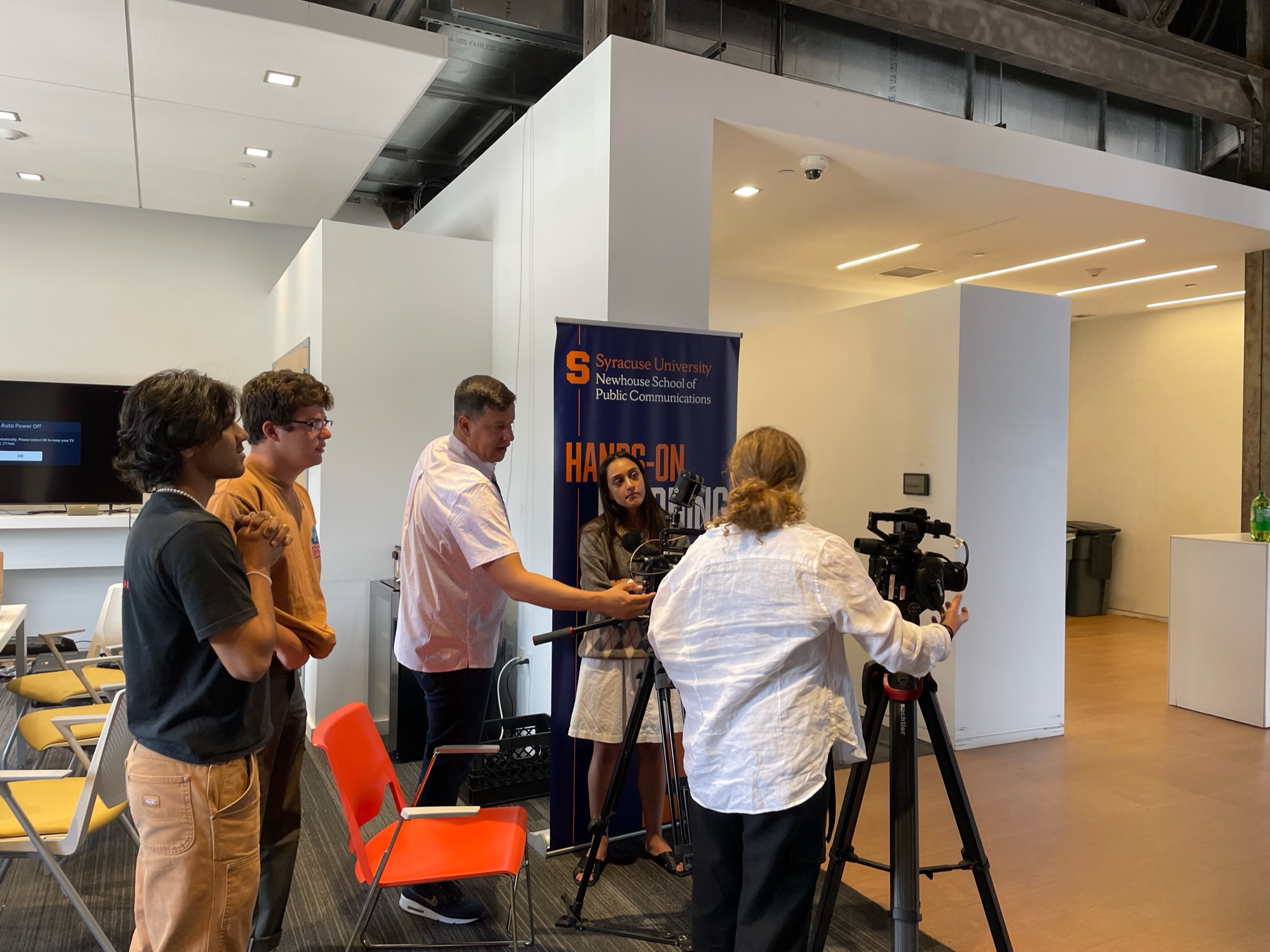 Milton Santiago worked with a crew of five students during the inaugural Lionsgate Studios Yonkers immersion program, serving as the crew for a docuseries based on the movie, “Paid in Full.”

“Every day I got to watch this seasoned veteran on set, the way he interacted with the crew, the planning that went into breaking down scripts and working with directors, his demeanor with the actors—all of those things that are so valuable and essential to succeeding in production. When I became an educator, I felt compelled to pass on a lot of what I received from that master class,” Santiago says.

He wants to offer those same experiences to the students he works with, but also recognizes many of them are facing the same fears he encountered when he was starting off.

“It can be scary. Can I do this? Am I going to be ale to absorb all of the technical things you need to know in addition to the artistic parts of shooting? I see this as an opportunity to build confidence in these students, letting them see that yes, this type of career is a possibility if you want it. You can do this,” Santiago says.

Hands-On Experiences to Last a Lifetime

The three filmmaking projects varied in size, scope and goals: six current students participated in shooting a short film, “The Cookbook,” in Syracuse; five students worked on a documentary as part of a hands-on immersion experience with Lionsgate Studios Yonkers; and one photojournalism student, Jane Shevlin ’23, helped on the set of the television movie, “The Countdown,” in Los Angeles. 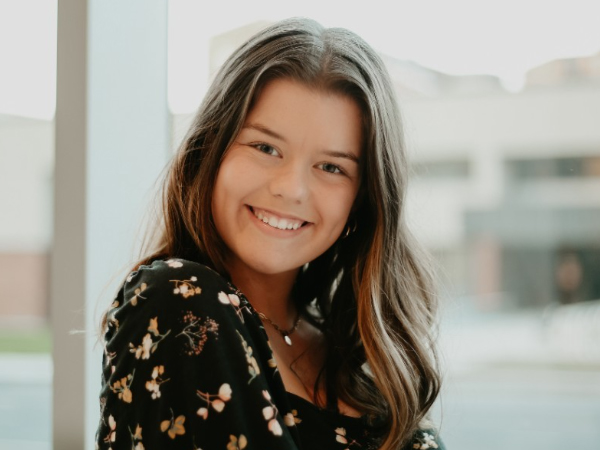 Photojournalism student Jane Shevlin ’23 helped on the set of the television movie, “The Countdown,” in Los Angeles.

On one day, Shevlin took still photographs on the set for a behind-the-scenes photo shoot. On another, she shadowed Santiago, the project’s director of photography, as he worked to capture the scenes that would make up the show’s pilot episode.

It was an exercise in patience, as scenes were shot again and again and again until everything came out the way Santiago wanted it. But Shevlin, who was a participant in the Syracuse University in Los Angeles (SULA) program, learned a valuable lesson.

“I can never watch TV the same way. When I’m watching an episode of my favorite show, ‘Modern Family,’ now I’m wondering how many times they shot the scenes. It was eye-opening, and it made me excited to become a director of photography myself and hopefully get behind the camera one day. I feel like my passion has been ignited because of this experience,” says Shevlin, who hopes to produce visually compelling documentaries that tell important stories after graduating. 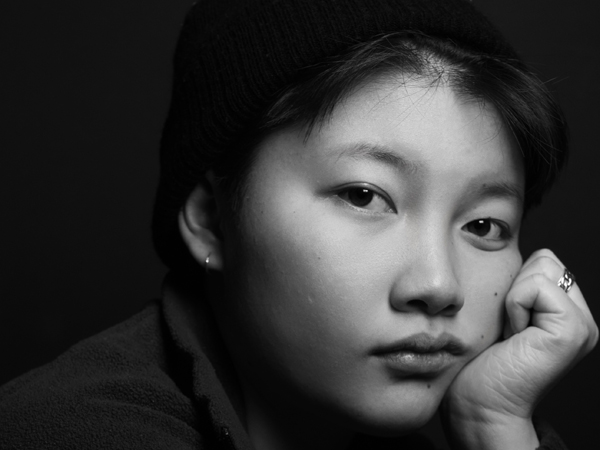 Xinning Li ’23 is a dual major studying photography and physics who helped shoot a short film, “The Cookbook,” in Syracuse.

A member of the Syracuse University Society of Cinematographers, Xinning Li ’23 was recruited by Santiago to assist on the set of “The Cookbook” after taking two of Santiago’s classes in Newhouse.

Li is a dual major studying photography in the Newhouse School and physics in the College of Arts and Sciences. She is interested in making films and documentaries, but like Santiago years ago, Li never knew the ins and outs of being on a production set.

That all changed after her experiences with Santiago, the cinematographer on the set of “The Cookbook.” Li served as the camera operator one day, and the next she was helping to set up the lights.

“You rarely get that genuine hands-on experience of what it’s like to be on set. But we were taking on a different role every day, and through this experience I learned about almost every role that I could possibly have on set,” Li says. “Professor Santiago has a perfect plan for what he’s trying to do and how he wants to help his student. It was a once-in-a-lifetime experience. I never would have dreamed I could gain those experiences, but it happened and I’m really grateful.”

Not all of the students who participated came from a photography or a video background. Kiana Khoshnoud ’23 is studying public relations in Newhouse, and in the fall of 2021, Khoshnoud participated in the Newhouse NYC program, which is run by director Cheryl Brody Franklin. 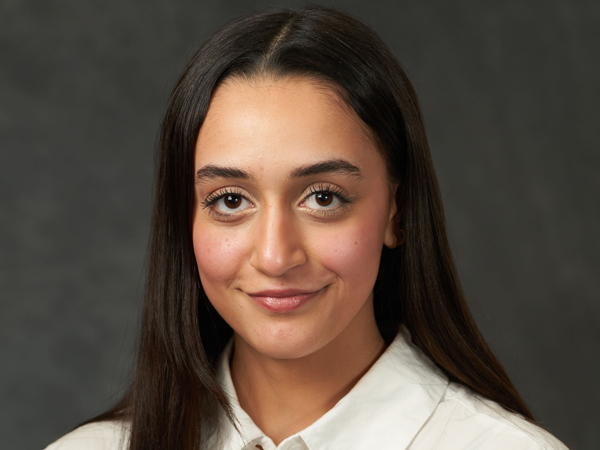 As part of a hands-on immersion experience with Lionsgate Studios Yonkers, Kiana Khoshnoud ’23 was a crew member on the set of a docuseries based on the movie, “Paid in Full.”

Last summer, while Khoshnoud interned at a public relations agency in New York City, Franklin reached out with an interesting offer: Santiago and fellow Newhouse assistant professor J. Christopher Hamilton were organizing the inaugural Lionsgate Studios Yonkers immersion program, and five students were needed to function as a crew for a docuseries based on the movie, “Paid in Full.”

With her public relations background, Khoshnoud was initially responsible for taking on-set photos for the Newhouse Instagram channel, but soon, Santiago was explaining the different cameras and camera lenses used for the shoot and educating her about setting up audio properly for an interview.

Nervous about handling the expensive equipment—never mind not having a clue how to operate a camera or set up audio for an interview—Khoshnoud says she quickly became proficient thanks to the easy-to-understand teaching methods of Santiago and Hamilton.

“It was a great experience. It was only two days long, but it felt like a semester-long class with how much material we covered. I honestly expected this to be a lot scarier of an experience, but Professors Santiago and Hamilton made it easy to learn and they both really encouraged me to ask questions. I feel very lucky to have been a part of this immersion experience,” Khoshnoud says.