At the start of the fall semester, members of the Maxwell School community were greeted by new figures joining the statue of George Washington that has served as the focal point of the school’s north entrance since the building was completed in 1937.

Framed prints of iconic changemakers like Susan B. Anthony and Frederick Douglass, alongside lesser-known advocates for social justice and other “Americans Who Tell the Truth” from the collection of artist Robert Shetterly flank the first president’s stately figure.

The new exhibition, titled “A Conversation with George Washington,” is part of an ongoing, wide-ranging effort to foster inclusion and elicit conversations over a central theme of importance to the Maxwell community: citizenship. One of several initiatives to make Maxwell’s building space more representative of its diverse community, the project was born from extensive conversations with students, alumni, faculty and staff during the past two years as leadership has developed a strategic plan for ensuring diversity, equity and inclusion are integrated into all aspects of the school’s mission and operations.

“Through this exhibition, we hope to encourage our community to think critically about how we can dialogue from a place of respect and active listening over thorny and complicated issues,” says Gladys McCormick, associate professor of history and associate dean for diversity, equity and inclusion. “To have difficult conversations and acknowledge the shades of grey is inherent in our work as social scientists, teachers, researchers and students.”

McCormick, also the Jay and Debe Moskowitz Endowed Chair in Mexico-U.S. Relations, says she is heartened by feedback from colleagues and students who’ve shared how they’ve had discussions about how citizenship has evolved since Washington and others drafted the Constitution in 1787. “Over the past two centuries, we have witnessed individuals—including those depicted in the portraits—struggle for inclusion and demand access to the rights that come with citizenship,” she adds. 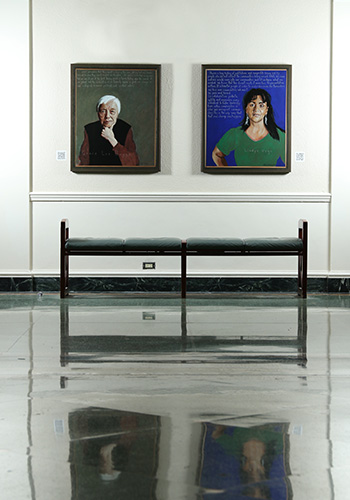 Shetterly’s “Americans Who Tell the Truth” collection has traveled the country since 2003, and has been displayed in university museums, grade school libraries, sandwich shops, the Cathedral of Saint John the Divine in New York City, and the Superior Court in San Francisco. All told, the collection includes over 260 portraits, painted over the past two decades. Historic icons like Helen Keller and Rosa Parks are joined by contemporary changemakers such as author and climate activist Naomi Klein and civil rights lawyer Van Jones.

McCormick collaborated with a team of Maxwell colleagues including Laura Walsh, academic operations coordinator, to select the 10 portraits to be displayed in the Maxwell foyer. The display includes Grace Lee Boggs, a community activist who in 1992 founded Detroit Summer, a community movement bringing together people of all races, cultures and ages to rebuild Detroit—a city Boggs has described as “a symbol of the end of industrial society.” Also included is Louis Brandeis, who served as a Supreme Court Justice from 1916 to 1939 and came to be known as the “People’s Attorney” for taking on causes such as workplace conditions, the fairness of banks and insurance companies, government corruption, and the unreasonable restraint of trade.

“We considered how each caused us to think through citizenship as an ongoing process as people push to be included and/or demand accountability,” says Walsh, noting that Brandeis and Sibel Edmonds were selected because they illustrate ways people have “defended citizenship from inside and outside government.”

Shetterly has shared through the years how the portraits have given him an opportunity to speak about the necessity of dissent in a democracy, the obligations of citizenship, sustainability, history and how democracy cannot function if politicians don’t tell the truth, if the media don’t report it and if the people don’t demand it.

According to the website for “Americans Who Tell the Truth,” Shetterly’s work uses “the power of art to illuminate the ongoing struggle to realize America’s democratic ideals and model the commitment to act for the common good.”

Dean David M. Van Slyke points to the closing of the Athenian Oath behind the Washington statue: “We will transmit this city not only not less, but greater, better and more beautiful than it was transmitted to us.” “It is representative of the diversity of the Maxwell School and our collective goal of creating an inclusive learning and working environment for the campus community,” he says.

McCormick and Walsh say the Maxwell community can expect to see new portraits periodically rotated into the exhibit. Meanwhile, other projects underway to promote inclusivity in Maxwell and Eggers halls include an installation called “Voices of Maxwell.” It recently went up in the entryway to Eggers Hall from the Lincoln courtyard and will feature a rotating display of quotes by Maxwell community members who have made significant contributions to the school throughout its history. 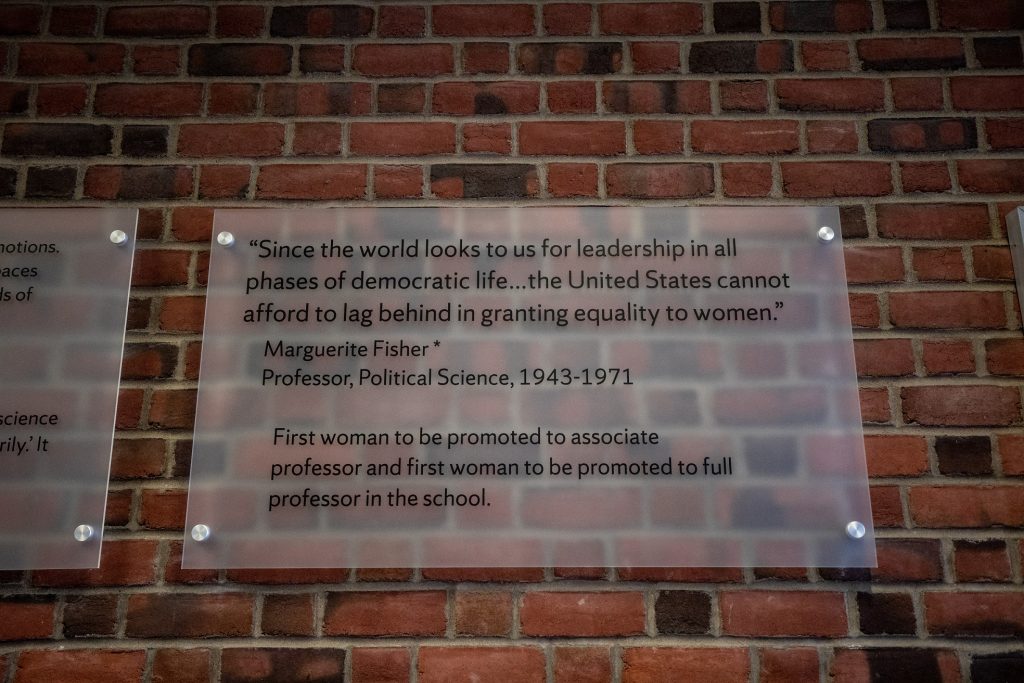 Marguerite Fisher, the first woman to be promoted to full professor at the Maxwell School, is among those featured in a new display, “Voices of Maxwell.” (Photo by Ross Knight)

The first series of displays honor the contributions of retired women faculty and staff such as Marguerite Fisher, the first woman to be promoted to associate and then to full professor in Maxwell.

“These physical changes are part of a wider effort to signal our commitment to ensuring all members of our community feel represented,” says Van Slyke. “They make diversity, equity and inclusion part of our collective everyday lived experienced in Maxwell.”