As the House of Representatives prepared to reconvene on the evening of Jan. 6, 2021, U.S. Rep. Liz Cheney walked through the Capitol to assess the aftermath of the insurrection.

In an area known as Statuary Hall, she found members of the National Guard intermingled with officers from the Bureau of Alcohol, Tobacco, Firearms and Explosives and local SWAT team members. She said they leaned against statues representing every state, “exhausted because they had spent the day engaged in hand-to-hand combat with our fellow citizens and because they had spent the day defending our Capitol building and our democratic process of counting electoral votes.”

“I walked around Statuary Hall, and I thanked them for what they had done,” recalled Cheney, “but there were not words to express the emotion of the fact that they had to engage in that battle.”

Cheney described the scene to hundreds of students, alumni and other members of the University community during an Oct. 3 event titled “Courage in Defense of Democracy.” Held in the University’s Goldstein Auditorium, it was hosted by the Maxwell School and had Cheney sharing the stage with Provost Gretchen Ritter for an interview-style conversation. Ritter is a leading expert in the history of women’s constitutional rights and contemporary issues concerning democracy and citizenship in American politics.

In his introductory remarks, Maxwell Dean David M. Van Slyke pointed out that the school is the only academic institution in the country with “citizenship” in its title and mission.

“Our reverence for others, intellectual humility, modeling dignity and embracing diversity makes us a school that cares deeply about ideas, evidence and working across all levels of government and all sectors of our economy to make a positive difference for the public good,” said Van Slyke, who is also the Louis A. Bantle Chair in Business-Government Policy. “As such, we are committed to fostering civil dialogue and meaningful exchanges in an increasingly polarized society.”

Sean O’Keefe, University Professor and Howard G. and S. Louise Phanstiel Chair in Strategic Management and Leadership, took the stage after the dean and spoke of the iconic statue of Abraham Lincoln that serves as a “sentinel” in the Maxwell School courtyard.

“During our nation’s nearly 250 years engaged in this great experiment of democracy, Lincoln presided during an extraordinary threat to the continuation of our unique form of citizenship governance,” he said before sharing a quote from the president in 1861, before the start of the Civil War.

“It is within that context that this is a particularly unique occasion for us to welcome a remarkable public servant who has literally lived up to the oath of office to preserve these principles and recited by all who have the opportunity to serve the citizens of the United States, to protect and defend the Constitution,” O’Keefe told the audience. 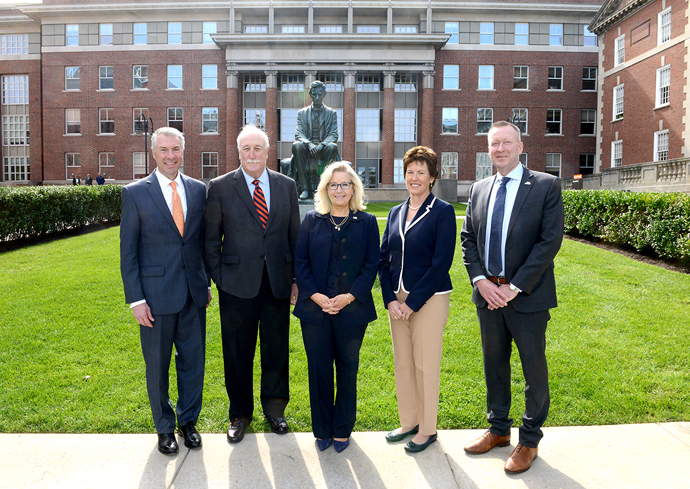 Cheney, who is the daughter of former Republican Vice President Dick Cheney, is serving as vice chairwoman of the House select committee investigating the Jan. 6 attack. She recently lost her bid for re-election in the Wyoming primary to a Republican candidate backed by former President Trump.

Ritter asked Cheney if “we should be surprised” that she was stripped of her leadership position after taking the unpopular stand in the GOP of supporting Trump’s impeachment and serving on the select committee.

“Many people thought you were a likely next speaker of the House and then it all changed,” said Ritter.

Cheney said she continues to find it inexplicable that so many in the GOP continue to defend the former president.

“What is so important is for people to understand and recognize that there’s a real cost to the Republic of defending behavior that’s simply constitutionally indefensible,” Cheney said. “And the cost of it is a constant chipping away at the foundations of the country.”

In a moment of levity, Ritter asked Cheney—a self-proclaimed “lifelong Republican”—how painful it is to now have liberal Democrats in her fan club. “I’m not choosy these days,” said the congresswoman, eliciting laughter from the audience.

The conversation later turned to a salient topic, given the venue: the role universities play in encouraging civil discourse and a commitment to citizenship.

“One of the things we don’t do very well in this country anymore is teach American history and teach the duties of citizenship, and I say that as the mother of five—someone who’s watched my kids in different schools go through social studies classes and learn about America’s role in the world,” said Cheney, adding, that’s “one of the reasons why places like the Maxwell School are so important.”

Ritter and Cheney discussed the role of social media and mainstream media in polarization. Cheney issued a condemnation of Fox News, specifically for reports she said seem to defend Russia in its siege against Ukraine. And she criticized social media outlets for using algorithms to drive subscribers to radicalized content.

“I think all of us have to step back,” Cheney said, admitting her own past partisanship. “We saw on Jan. 6 that words matter. We have to recognize that in the world in which we’re living today, political violence increasingly is becoming part of our politics, and it cannot be that way.”

Cheney cited a recent incident in which Trump said that Senate Minority Leader Mitch McConnell (R-KY) has a “DEATH WISH” and made racist comments about his wife.

“When you see former President Trump just in the last 24 hours suggesting in a pretty thinly veiled way, using words that could well cause violence against the Republican leader of the Senate, saying he has a death wish, launching an absolutely despicable racist attack against Secretary Chao, Senator McConnell’s wife, and then you watch the fact that nobody in my party will say that’s unacceptable,” Cheney said, adding, “Everybody ought to be asked whether or not that’s acceptable, and everybody ought to be able to say, ‘no, that’s not acceptable.’”

Other topics covered during the roughly 90-minute conversation included climate change and same-sex marriage. Ritter asked Cheney about her changed stance on the latter. Her opposition a decade ago caused a public rift in her own family—her sister, Mary, is gay and married with children.

“Obviously, this is an issue that touches my own family,” Cheney said. “I believe that freedom means freedom for everybody. I believe that we have to protect the rights for people to marry who they love. I said I was wrong on this issue. It’s a painful issue to talk about because I love my family. …I love my sister, and I love her family very much.”

As the event wrapped up, Cheney brought up another member of her family: She shared that one of her sons is taking a forensics class in which he has been tasked with memorizing a speech. His pick: Democrat Al Gore’s 2000 presidential election concession speech, given after the Supreme Court ruled against his protest, effectively making George W. Bush the nation’s 43rd president.

Gore spoke of how Sen. Stephen Douglas conceded to Lincoln upon his defeat, telling him, “Partisan feeling must yield to patriotism.” Of his own situation, Gore said, “Now, the U.S. Supreme Court has spoken. Let there be no doubt, while I strongly disagree with the court’s decision, I accept it.”

“I’m sure it was a very painful speech for him to give,” said Cheney.

The anecdote echoed Cheney’s earlier description of her walk through the Capitol on the evening of Jan. 6. In addition to taking note of the exhausted police officers, she paused to survey a familiar painting in the Rotunda that depicts when first president George Washington resigned his commission as commander-in-chief of the Continental Army. The action was a significant moment in establishing a longstanding tradition of the peaceful transition of power, honored by every president except for one.

“I think that the vast majority of Americans on both sides of the aisle believe in those honored institutions of our democracy,” said Cheney, to much applause. “We will get through this period, and we will elect people who are going to protect us.”