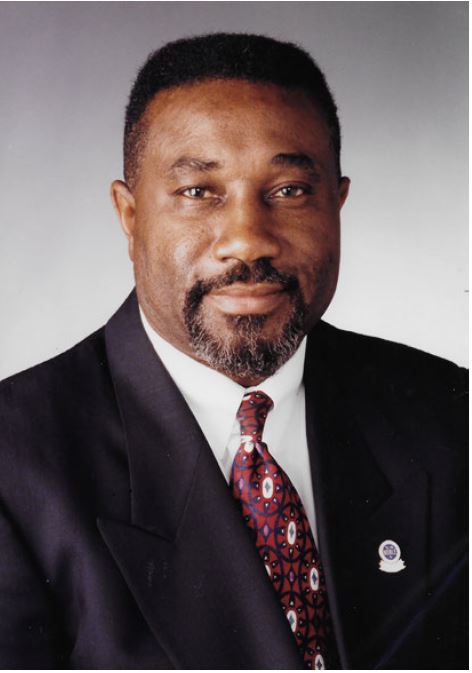 Shortly after Robert “Robbie” Robinson became the University’s chief of public safety in October 1993, he had a “chance encounter” with James K. Duah-Agyeman, who was then the director of the Center for Academic Achievement in the Division of Student Support and Development. “I made it a point to introduce myself to him,” says Duah-Agyeman, who now serves as lead director, Intercultural Collective, and director, Multicultural Affairs. “As I began to do so, the chief chimed in and said, ‘I know who you are, James. It is my job to know those I serve and protect.’”

The memories of the former chief’s deep sense of public service came flooding back to Duah-Agyeman after learning of Robinson’s death earlier this year. Robert T. Robinson was 75 years old when he passed away April 8, 2022. Today, he’s being remembered for what he brought to Syracuse University when he was appointed to lead the Department of Public Safety in 1993 and what he left behind when he left the job nearly nine years later in January 2001.

“Robbie led by example,” says Keith A. Alford, who was an assistant professor of social work when he met Chief Robinson in 1996. Alford is now dean of University at Buffalo’s School of Social Work. “Robbie was fiercely dedicated to his role as chief of public safety. He was a hands-on leader and had a special ability to make sure that everyone he encountered felt uniquely valued—this included students, staff and faculty.”

It was that dedication to inclusion that Robinson brought with him to Syracuse. He had previously served as chief of police at Southern Methodist University (SMU) in Dallas, Texas. When he stepped down from his SMU post, The Daily Campus newspaper published a story (Aug. 31, 1993, Vol. 79, No. 2) quoting Robinson: “My goal and intention at the time that I took the position was to present a challenge to SMU. That was a challenge of diversity, of sensitivity—that the SMU police department would be inclusive within the community, as opposed to exclusive. When I came here, I was on a journey. Now, I’m taking this journey to Syracuse, New York.”

Duah-Agyeman says that’s exactly what happened: “A dedicated servant leader and diversity change agent, Robbie was very committed to engaging his department in relevant trainings on diversity, equity and inclusion to raise the level of sensitivity and awareness of his staff on diversity related issues as they interacted with our students.” Duah-Ageyman recalls it was a difficult time and “there was a need for our students of color to see that they could relate to law enforcement.”

When Alford arrived on campus three years later, progress was underway. “I remember the public safety division being quite diverse, inclusive of women and people of color,” says Alford. “Robbie was well known for making sure his department had the proper training to engage a diverse campus and work well with diverse groups around campus. He met with campus leaders and student leaders, and he was good at sponsoring gatherings, just pulling folks together to engage in opportunities for dialogue. I remember attending several cultural festivals with Robbie front and center. It was important for someone of his stature to embrace multiculturalism.”

Robinson was born in Jefferson, Alabama. He joined the United States Air Force after graduating high school. Following the Air Force, he joined the Baltimore City Police Department and later became a Baltimore City Court Commissioner. He attended Baltimore City Community College where he received an associate’s degree; University of Baltimore for a bachelor of science degree in law enforcement and Coppin State University for a master’s degree in correctional education-administration.

Robinson is survived by his wife Carol, two daughters, a son, three grandsons and extended family.