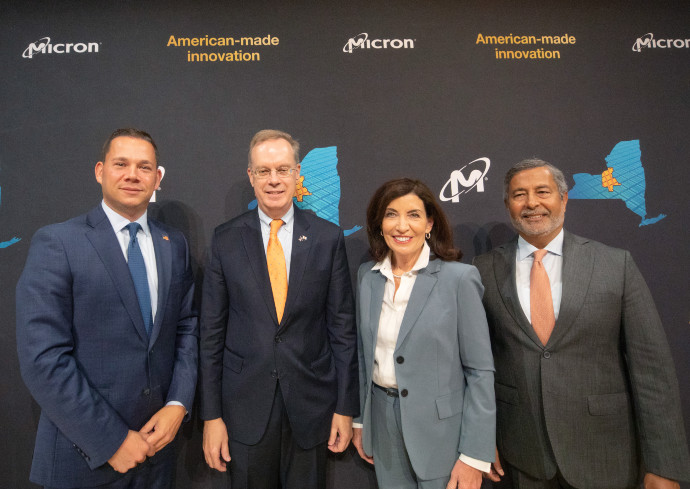 Syracuse University was the site of a historic announcement today by Micron Technology, which will invest $100 billion to build a semiconductor fabrication facility in the Town of Clay. From left are Onondaga County Executive Ryan McMahon, Chancellor Kent Syverud, New York State Gov. Kathy Hochul and Micron President and CEO Sanjay Mehrotra. (Photo by Ross Knight)

Earlier today, Syracuse University was the site of a historic announcement of a transformational investment by Micron Technology in the Central New York region: a $100 billion semiconductor fabrication facility in the Town of Clay—the largest investment and facility of its kind in the United States. Officials with Micron announced plans to build a leading-edge memory fab in New York state this morning during an event in the K.G. Tan Auditorium, at the Daniel and Gayle D’Aniello Building, home of the National Veterans Resource Center.

Micron Technology Inc. is one of the world’s largest semiconductor companies and the only U.S.-based manufacturer of memory. The new megafab will increase domestic supply of leading-edge memory and create tens of thousands of new jobs. It is the largest private investment in New York state history.

Chancellor Kent Syverud welcomed Micron President and CEO Sanjay Mehrotra and several local, state and federal government representatives for this significant announcement that will impact the region and state for generations to come. The investment will create the largest-ever cleanroom space announced in the U.S., creating nearly 50,000 New York jobs over more than 20 years. Those include 9,000 new high-paying Micron jobs and over 40,000 community jobs, including suppliers, contractors and other supporting roles.

In August, President Joe Biden L’68 signed off on the bipartisan CHIPS and Science Act, which will increase the country’s production of semiconductors while fueling efforts to reduce dependence on foreign suppliers.

“I am grateful to President Biden and his administration for making the CHIPS and Science Act a priority, to Senator Schumer and a bipartisan coalition in Congress for passing the legislation, and to Governor Hochul and County Executive McMahon for the local and state partnerships that made this investment possible. Micron will leverage the diverse, highly educated and skilled talent in New York as we look to build our workforce in the Empire State,” said Mehrotra in a press release. “This historic leading-edge memory megafab in central New York will deliver benefits beyond the semiconductor industry by strengthening U.S. technology leadership as well as economic and national security, driving American innovation and competitiveness for decades to come.” 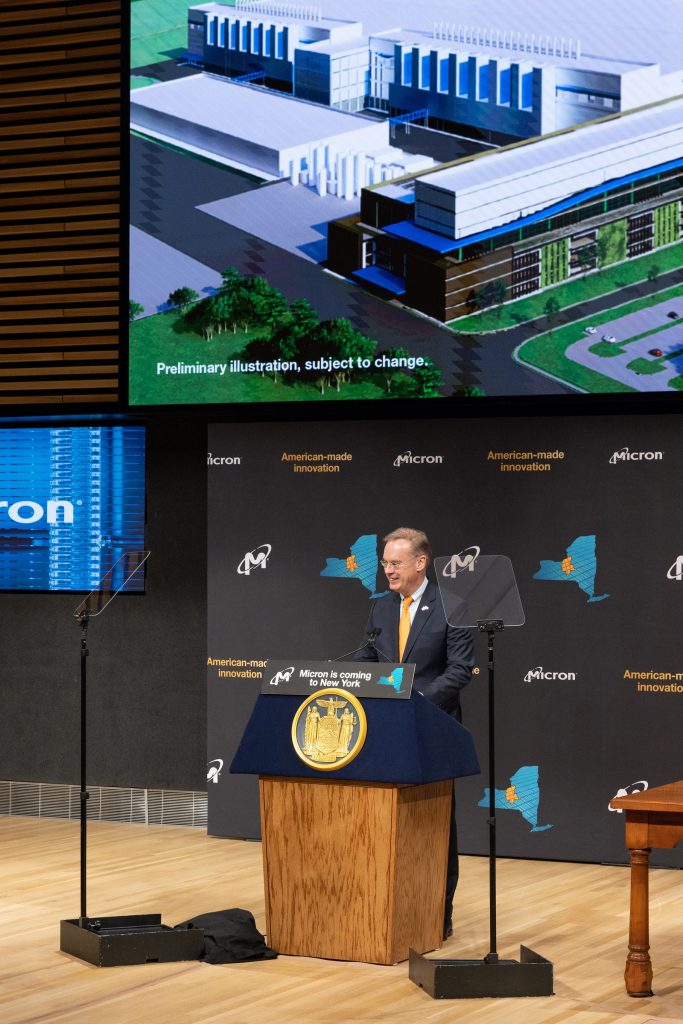 At today’s event with Micron Technology, Chancellor Syverud recognized the critical efforts of local and state leaders to help bring Micron to the area. (Photo by Jeremy Brinn)

“Micron’s $100 billion investment in New York marks the start of something transformative in scale and possibility for our state’s economic future. I promised that we would jumpstart the economy by being the most business-friendly and worker-friendly state in the nation, and thanks to our State Green CHIPS legislation, the federal CHIPS and Science Act, and extraordinary partnerships with business, labor, and local and federal leaders, this project will do exactly that,” Gov. Hochul said in a press release. “Together, we are leveraging this investment—the largest private-sector investment in state history—to secure our economic future, solidify New York’s standing as a global manufacturing hub, and usher the state into another Industrial Revolution.”

Syracuse University was chosen as the site of today’s announcement because of the University’s deep connections and commitment to the Central New York region.

In a message to the Orange community, Chancellor Syverud said: “This is a proud moment for our University. Syracuse University’s academic, economic, cultural and civic contributions to Central New York are among the factors that attracted Micron to our area. The opportunity for collaboration—across all facets of our University—is significant. From internship and career opportunities for our students and alumni, respectively, to interdisciplinary research opportunities, educational programs, veterans initiatives, community building, engagement and investment, and economic development, Micron will quickly become one of our region’s greatest partners and a key driver of Central New York’s long-term prosperity.”

Micron selected the New York site based on the state’s leading higher education institutions, access to talent traditionally underrepresented in technology jobs and a significant military population aligned with Micron’s commitment to veteran hiring. The site also offers access to water and clean, reliable power to enable a project of this scale while achieving the company’s long-term environmental goals.

Micron and the state of New York will also invest a historic $500 million in community and workforce development with a focus on disadvantaged populations over the duration of the project. Reflecting the company’s commitment to diversity, equity and inclusion, Micron’s New York plans include initiatives to address economic disparities and accelerate economic opportunity for underserved communities in the semiconductor industry. Micron aims to hire a diverse workforce for both direct roles as well as broader construction ecosystem jobs.