Leaving behind your hometown, friends and family to attend college can be a daunting task for any high school student. 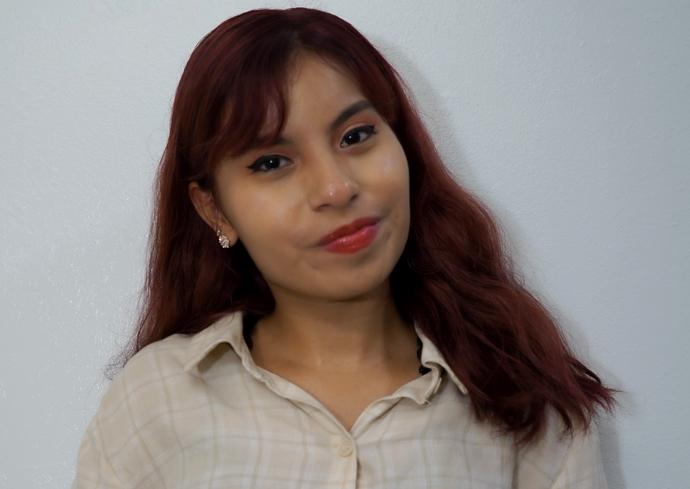 Senior Diana Garcia-Varo credits her involvement with the Intercultural Collective with creating a cultural community and connecting her to her Mexican American heritage on campus.

Garcia-Varo, a proud Mexican American, enjoyed being surrounded by a diverse cultural community when she was growing up in the Bronx, New York. What does her heritage mean to her?

“It means community, it means family and it means finding people who are always there supporting each other, whether we share the same background or not. It’s about connecting and creating that community that makes us feel like a family,” says Garcia-Varo.

She’s the first to admit it was a big “culture shock” coming to Syracuse, which has a student body consisting of 52.4% white students, compared to 9.8% for Hispanic or Latinx students.

While Garcia-Varo initially struggled to find her community on campus, that all changed when she was hired by the Intercultural Collective during the second semester of her freshman year.

“I saw a lot of students from different backgrounds and identities, and it reminded me of my neighborhood in the Bronx. It was a cool space to connect, and whether they were just hanging out or having important cultural conversations, it was a great way to find my new community. Those were such meaningful interactions because I was able to meet students and staff members who shared a similar background as I did,” says Garcia-Varo, who also works as a peer mentor for the Disability Cultural Center.

Garcia-Varo knew she wasn’t alone in her desire to connect with her cultural heritage on campus, and over the summer, she was presented with a terrific opportunity to both showcase that pride in her heritage and pursue one of her passions: highlighting authentic stories featuring people of color on campus.

Knowing the crucial role of Garcia-Varo’s involvement with Multicultural Affairs and the Intercultural Collective played in discovering her community, Garcia-Varo set about finding students who could share how their involvement with on-campus organizations allowed them to connect with their cultural identities.

Over the summer, Garcia-Varo interviewed 11 students from across campus—some who were involved with student organizations pertaining to their culture, like the Dominican Student Association and Mexican Student Association, others who were active in academic programs like the Society of Hispanic Professional Engineers and others who belonged to Greek life organizations. 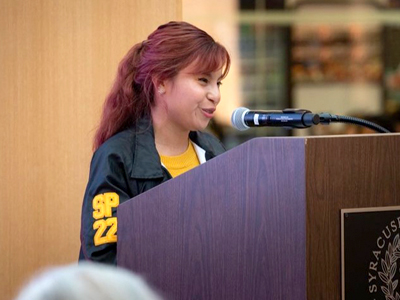 Diana Garcia-Varo speaks to the crowd about her video used to showcase how Syracuse University students connected to their cultural heritage through student organizations on campus.

Regardless of their heritage, Garcia-Varo said every one of the students she profiled told the important story of how belonging to these student organizations allowed them to maintain their authentic cultural identities while connecting with their peers and discovering a community on campus.

The video debuted to rave reviews during the Latinx Hispanic Heritage Month Opening Ceremony on Sept. 15

“One of my goals as a videographer is to highlight authentic stories and accurately depict the student experience here at Syracuse University. It was really important for me to have students from different backgrounds share their experiences, and it was powerful,” says Garcia-Varo, who produced versions in English and Spanish to make her video accessible to as many people as possible.

“One of the biggest takeaways was the importance of students of color coming together to create a community and a home away from home. Sometimes you may have to start your own organization, sometimes you have to seek out these communities, but they are there,” she adds.

While the Latinx Hispanic Heritage Month programs serve as a source of pride for those who trace their ancestry to more than 20 Spanish-speaking countries in Latin America, they’re also an opportunity to demonstrate to the rest of the campus community the rich cultural heritage of the University’s students, faculty and staff.

The importance of celebrating one’s culture on a predominantly white campus is not lost on Garcia-Varo.

“For us, Latinx Hispanic Heritage Month is forever. This month puts our culture out there for people who may not stop to think about it. This is who we are, and this is what our rich culture is all about,” says Garcia-Varo.