Their goal and primary focus? Striving to help make each student’s undergraduate experience the best it can be.

The makeup of the SA includes elected student representatives from each school or college on campus. Students who serve on SA have the opportunity to make a difference in the lives of their peers, and at the same time, gain valuable leadership experience. 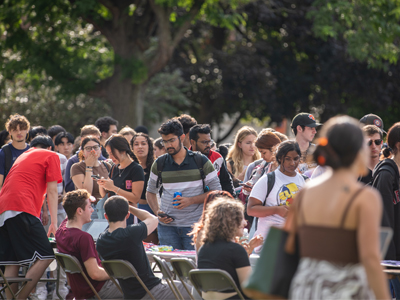 The Student Association is holding its fall elections Oct. 3-7 to determine who will serve as undergraduate members of the student body government.

During each academic year, the SA’s Board of Elections holds two campuswide elections for students interested in serving in a leadership role. In the fall, elections are held to determine who will serve as first-year assembly representatives, while also filling any existing board vacancies. In the spring, elections are held for every elected seat, including the executive offices of president, executive vice president and comptroller.

Hoping to include as many undergraduate students as possible in the voting process, students can cast their vote through a campuswide email, online through the SA website, on SA social media channels and through a QR code featured on both digital signage in the Schine Student Center and lawn signs on the Kenneth A. Shaw Quadrangle. SA representatives will also table in front of Schine throughout election week to answer any questions.

There are 30 candidates in the running for 19 SA seats, along with a few other seats that are open through the write-in process.

This fall, assembly representatives will be elected to serve from the following schools/colleges:

Additionally, elections are held to determine which students will serve as first-year at-large and at-large representatives for SA.

Those students elected will serve SA as part of the 66th session of the student body government. They will hold their SA positions through May, when all of their seats will then be up for re-election in the spring.