With more than 100 Army Reserve Officer Training Corps (ROTC) cadets under his charge, LTC Matthew (Matt) Coyne has stepped into his new role as professor of military science at Syracuse University with gusto.

“I’m extremely fortunate for the opportunity to be here,” Coyne says. “I’m excited to be part of a university that supports the military community as much as Syracuse does.”

Coyne has already appreciated the significance of this institutional support, which affirms his decision to mentor future military leaders on campus. Just four days into Coyne’s new job, Chancellor Kent Syverud visited the National Veterans Resource Center at the Daniel and Gayle D’Aniello Building (NVRC) to outline the University’s deep history of supporting military-connected students alongside priorities for the One University Veteran/Military Initiative. Military-connected students and programs are one of the top priorities for University leadership, and to Coyne, it shows. 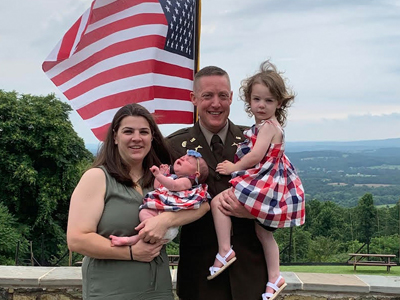 LTC Matthew Coyne, head of the Army ROTC program, posing with his wife, Maria, and children Jamison and Addison.

“You can see the results of what they’ve done to make Syracuse the best place for veterans. These are tangible things in terms of the programs and infrastructure here,” says Coyne. “The framework they have in place is a critical point for me to share with students and parents.”

Syracuse housed the Student Army Training Corps to support the training effort for World War I and then demobilized it in 1918. In 1919, the University established the ROTC, making it the longest consecutively running program on a college campus.

Coyne sees Army ROTC at Syracuse as a prestigious program at a prestigious University with a long history of producing quality officers for the U.S. Army. The University’s facilities amplify the benefits the Army provides, making military service an even more compelling prospect that Coyne will be able to share with students and prospective cadets.

“From an opportunity perspective, you’ll find nothing finer than what Syracuse gives to the Army ROTC,” Coyne says. “If you have an inkling or desire to serve, it’s a great way to do it.”

The call to serve is something Coyne understands well.

Growing up in Stony Point, New York, a stone’s throw from West Point, the idea of military service was always in his mind when Coyne thought of his future. That picture came into sharper focus for Coyne after the attacks on September 11, 2001, which came only two weeks into his senior year of high school. That moment galvanized the nation and confirmed his path into military service. He drew from two mentors to help guide him through the application process: one a cross country coach and Marine who served in the National Guard, and another who completed ROTC at Fordham University.

Coyne’s plan was to serve in ROTC at the University of Scranton in Pennsylvania, serve his Army commitment and return to Stony Point to continue serving his community as a police officer. After he graduated, he went through eight months of initial training, then it was onto his first duty station. Sixty days later, he landed in Afghanistan to lead a platoon of 43 soldiers. 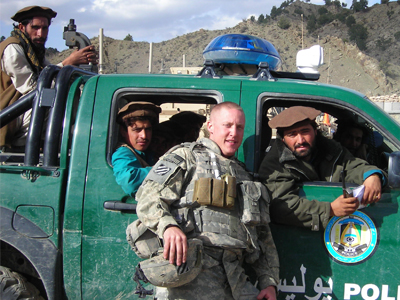 At 22 years old and less than a year out of college, Coyne shouldered a tremendous responsibility. Ten months into his 15-month deployment, he went home on leave where a chance meeting with an old friend gave him a different perspective. His friend had stayed home to become a police officer, like Coyne had considered, and it wasn’t as exciting. It made him think an Army career would be preferable.

“I thought, ‘I like what I do right now. I’m not sure I’m ready to come back home to do that yet,’” Coyne recalls. “The Army provided me opportunities to travel, the opportunity to meet people and opportunities to pursue more education. I tell younger folks: There’s so much world we don’t explore, and there are so many opportunities. Try something somewhere else for a few years. If you want, you can always come home.”

In addition to deployments to Afghanistan, Coyne has moved eight times in his 16 years of service, including South Korea; Ft. Drum in New York; Ft. Dix in New Jersey; and most recently the Pentagon.

Coyne’s military experiences also gave him a good framework for understanding how to manage the Army ROTC program. He cites structure, time management and prioritization abilities among the life skills he learned through the military. His instructors also had a big influence on him, and his professor of military science had such a lasting impact on his professional development that they still check in with each other.

While the Army afforded him greater education, including a prized spot in the Federal Bureau of Investigation National Academy, Coyne actively sought an opportunity to give back to the next generation of leaders. His wife Maria, also from New York, moved away from home for the first time to go across the world while Matthew was stationed in Korea. They both wanted to come home to New York with their young children Jamison (2 ½ years) and Addison (3 months) after Coyne’s most recent assignment at the Pentagon.

“I’m very fortunate to get my number one choice. I look at it as a phenomenal opportunity to get back with the younger generation,” Coyne says. “My focus is on developing officers of character and building them into leaders ready to lead our nation’s sons and daughters. I’m all-in, 100 percent.”