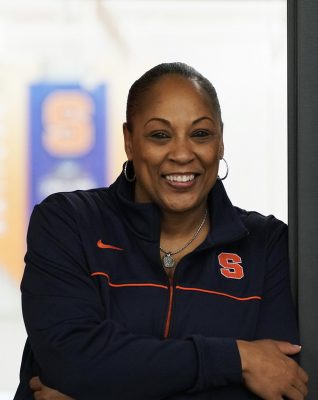 Continuing its mission to amplify the voices of women and non-binary people in leadership roles at Syracuse University, the Women in Leadership (WiL) Initiative is pleased to invite faculty and staff to an Inspire leadership talk featuring women’s basketball head coach Felisha Legette-Jack ’89 on Wednesday, Oct. 5, from 3 to 4 p.m.

Coach Legette-Jack will speak in the JMA Wireless Dome, followed by a WiL networking reception in Club 44 from 4 to 6 p.m. All community members, regardless of gender identity or expression, can participate in WiL programming.

In partnership with Syracuse University Athletics, WiL will also give away Orange women’s basketball season tickets to the first 100 people who register for and attend the event by the RSVP deadline of Sept. 28.

Felisha Legette-Jack is a 1989 graduate of Syracuse University and former Orange All-American. The Syracuse native and 20-year collegiate head coach took the reins of the Orange women’s basketball program in March 2022. One of the all-time Orange greats, Legette-Jack returned to her hometown with more than 30 years of coaching experience. She spent the previous 10 years building the University at Buffalo’s women’s program into one of the perennial powers in the Mid-American Conference (MAC), leading the Bulls to four NCAA Tournaments, including the 2018 Sweet Sixteen.

Legette-Jack is the all-time winningest coach in Bulls history with a 202-115 record and four MAC Tournament Championships. During her career she has guided three different Division I programs to a combined 13 winning seasons, nine postseason berths and six 20-win seasons, and has accrued a 343-279 record. On Nov. 14, 2021, Legette-Jack’s jersey was retired to rafters of the JMA Dome, joining those of 15 men’s basketball and six football standouts who have received this honor. It marked the first time in Syracuse University history that a female student-athlete was recognized in this manner.

After 30 years at Syracuse University, Associate Chief Information Officer (ACIO) for Academic Technology Services Jenny Gluck has announced her retirement, effective at the end of January. Mike O’Mara, Director of Learning Environments and Media Production, will serve as interim…

Undergraduate students seeking paid research assistant positions to work with faculty mentors on research and creative projects can apply for those opportunities in February and March. Students interested in funded positions for summer 2023 and/or academic year 2023-24 should submit…

Move over, men’s soccer team. There’s another team on campus vying for a national championship. Eight sport analytics students from the Falk College of Sport and Human Dynamics will compete Feb. 1-2 in the AXS National Collegiate Sports Analytics Championship…