The Syracuse University Humanities Center celebrates Syracuse Symposium’s 19th year with a diverse selection of public events exploring “repair” in the context of medicine, religion, the environment and more. Through a lineup that includes a film festival, lectures, workshops, exhibitions and readings, programming will consider whether and when “repair” is possible, and encourage ethically based action. Symposium’s annual theme is chosen by the center’s advisory board, whose members review proposals and select each year’s events and activities. 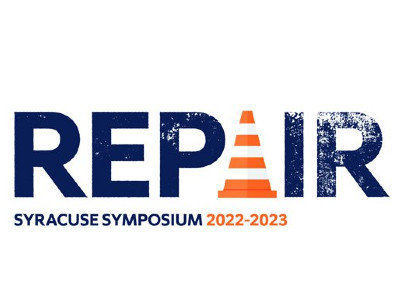 According to Humanities Center Director Vivian May, this year’s season will examine the concept of repair through different historical, political and cultural lenses. She notes that while for many, repair signifies healing, mending or fixing, or bringing together (re-pairing) or restoring, it can also reference questions of restitution and reparations.

“Repair, as a verb, entails action—and the concept touches on key questions about what’s possible to repair, how, and by whom” says May, who also directs the Central New York Humanities Corridor. “For instance,” she asks, “who/what is seen as in need of ‘repair’ or as broken? How might repair and justice be ‘stitched’ together?” Furthermore, she notes, as much as repair can signal healing (in a positive sense), it can also reinforce prevailing ideas about health, cure and able-bodied norms.

This year’s Syracuse Symposium kicks off with the 20th Annual Syracuse University Human Rights Film Festival. Presented by the Humanities Center and the S.I. Newhouse School of Public Communications, the three-day festival features a line-up of award-winning films addressing social justice issues around the globe with ties to the symposium theme of “repair.” All films listed below will be screened on the Syracuse University campus.

Repairing Catholicism: Jamie Manson (Catholics for Choice) will be on campus for two events Oct. 6 and 7. The first, Catholic Women Speak—and Act: Repairing and Reclaiming a Progressive Faith-Based Vision, will feature a discussion about how intersectional activism can reshape and redirect the role of religion in the public square. The second event, Repairing Catholicism: Strategies for the 21st Century, is a workshop highlighting strategies, priorities and effective means of engagement for those interested in transformative justice.

Writing to Repair: Jennifer Mercieca, professor of communication and journalism at Texas A&M, and Ryan Skinnell, associate professor or rhetoric and composition at San Jose State, will present two events on Oct. 24. In Writing for Public Media, each will share their experiences translating research for general and public audiences. Their other event, Write to Repair, will offer ways to restore the relationship between discourse and democracy.

Environmental Justice: On Oct. 27, documentarian Jason Corwin (Seneca Deer Clan) will screen his film, “Denying Access,” which chronicles the Water Protectors at Standing Rock and Seneca Territory as they opposed the Dakota Access and Northern Access Pipelines. Corwin, an assistant professor of Indigenous studies at the University at Buffalo, will discuss the ways he and other Senecas worked to successfully stop the Northern Access Pipeline, which was slated to transport fracked gas upstream from their territories. On Oct. 28, Corwin will lead a workshop exploring how stories can move people to action, with focus on filmmaking in pursuit of environmental justice.

The Power to Heal Through Writing: Poet and author Sapphire, whose best-selling novel “Push” inspired the Academy Award-winning film “Precious,” will offer two virtual presentations. The first, It Takes a Village: Recovering Our Children Through Literature and Literacy on Nov. 3, will illustrate how literature and literacy can transform young lives. In Literature, Trauma, and Healing: A Craft Discussion with Sapphire on Nov. 4, she will discuss how writers can work toward healing when dealing with traumatic material.