In African philosophy, the term “ubuntu” can be translated as “I am because we are.” The phrase, which illustrates the notion that a person’s sense of self is shaped by their relationships with others, is the framework guiding this year’s Narratio Fellowship.

Now in its fourth year, the fellowship offers a platform for resettled refugee youth to share stories of their own histories and experiences through artistic expression. Under the guidance of mentors—many that include Syracuse University students who once took part in the fellowship themselves—the program provides opportunities for fellows to share their stories in a way that is authentic and meaningful to show the world that they are not solely defined by their experience of being displaced. Fellowship co-founder Brice Nordquist says the ubuntu concept is particularly fitting as the idea of collectivity—within communities, families and cultures—is prominent in the fellows’ work. 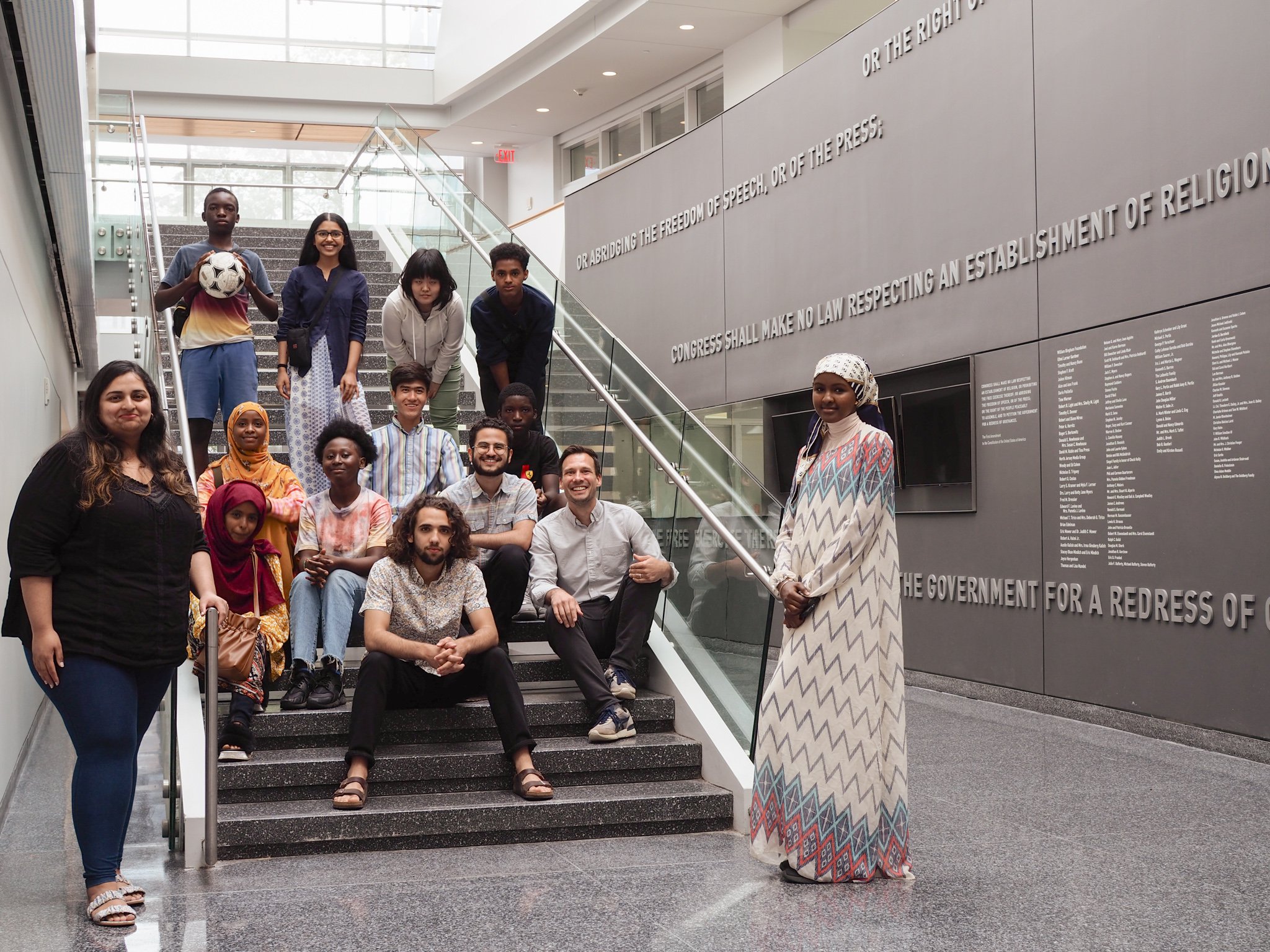 Narratio Fellowship co-founders Ahmed Badr and Brice Nordquist (seated on the right) with mentors and fellows from this year’s Syracuse cohort during a summer workshop at the Newhouse School. (Photo by Edward Grattan)

The Narratio Fellowship was started in 2019 by Nordquist, Dean’s Professor of Community Engagement and founding director of the Engaged Humanities Network (EHN) in the College of Arts and Sciences, and Ahmed Badr, an Iraqi American author, poet and social entrepreneur. The fellowship is a collaboration of EHN, the North Side Learning Center in Syracuse, the Metropolitan Museum of Art and Narratio.org.

In its first three years, nearly 40 fellows in total from the Syracuse area took part in the program. As it grew, new opportunities for development came along, allowing the fellowship to increase its reach. In addition to 10 students in the Syracuse cohort this year, there are another 12 fellows making up a cohort in Richmond, Virginia. The expansion was made possible through a collaboration with ReEstablish Richmond, an organization that connects refugees to resources to help them establish roots in the United States, the Virginia Office of New Americans and Virginia Commonwealth University.

Learning the Art of Storytelling 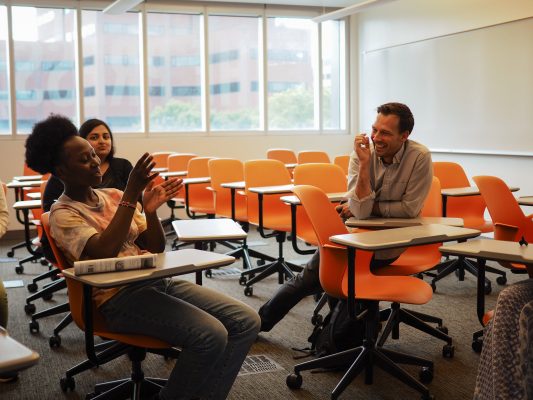 Nordquist (right) engages in discussion with a student during a summer workshop on campus. (Photo by Edward Grattan)

Like in past years, the fellowship kicked off with a four-week intensive storytelling and leadership workshop during the summer. Nordquist served as project coordinator in Syracuse and Badr oversaw the group in Richmond. Through their ongoing collaboration with the Metropolitan Museum of Art (Met), fellows chose objects from the museum’s Ancient Near East Department as the basis for their projects.

“We had a couple of workshops over the summer with Met curators, conservators and educators to talk through materials, the history and uses of the objects,” says Nordquist. “Then the fellows tied their own memories, experiences and life moments to these objects.”

The Syracuse cohort was led by artists-in-residence Wendy Wang and Maleeha Bhadki, both students in the Newhouse School of Public Communications. Each are on the creative team at CODE^SHIFT (Collaboratory for Data Equity, Social Healing, Inclusive Futures and Transformation), a new multidisciplinary research space for communication and data justice founded by Newhouse Professor Srivi Ramasubramanian.

Wang and Bhadki worked with fellows throughout the summer on photo-poetry projects both on campus and at the North Side Learning Center in the City of Syracuse. The photos and corresponding poetry articulate the fellows’ life experiences by re-imagining the stories behind Met objects.

The artist-in-residence for the Richmond cohort is Alfonso Pérez Acosta, a Colombian painter and arts educator. He guided the students through their projects inspired by ancient Sumerian cylinder seals from the Met’s collection. The small round cylinders, dating back to the fourth millennium B.C., are engraved with characters or intricate designs as a form of personalization. When the seal is rolled into wet clay it leaves an impression and was used as a means of marking one’s property or making documents legally binding.

“The Richmond cohort was really into the personalized signature aspect, so they created their own cylinder seals out of wax candles,” says Nordquist. Each student drew into the candles and carved designs to express their own personal story and then rolled them out into clay emulating the process used in Mesopotamia thousands of years ago.

Trip to the Met and Upcoming Exhibits

While the two groups met virtually through online workshops this summer, they will gather for the first time in person at the fellowship’s annual trip to New York City in November. Students will present a public performance at the Met and have the chance to see and hold the objects that inspired their projects. Fellows will also take part in a cylinder seal workshop at the museum where they will examine and be able to roll out seals from the Ancient Near East collection. In addition to the presentation and workshops at the Met, organizers are also planning a pop-up exhibit where the Richmond cohort will display their original cylinder seals and accompanying artwork.

The fellowship will culminate with two spring exhibitions that draw together the collective work of the fellows. Each cohort will join up in Richmond and Syracuse to present their projects to the public.

According to Nordquist, the fellowship has become more self-sustaining with each graduating class as many former fellows stay on and become mentors to the current cohort through paid assistantships. One of those is Rayan Mohamed, a transmedia major in the College of Visual and Performing Arts (VPA), whose motivation to become a filmmaker was sparked by her 2020-21 fellowship. That year the fellows’ projects focused on storytelling through film as they worked with artist-in-residence Ana Vîjdea G’20, an internationally recognized Romanian filmmaker and former Fulbright Fellow who earned an M.F.A. from VPA. Mohamed’s work with the fellowship this year is supported through Narratio. 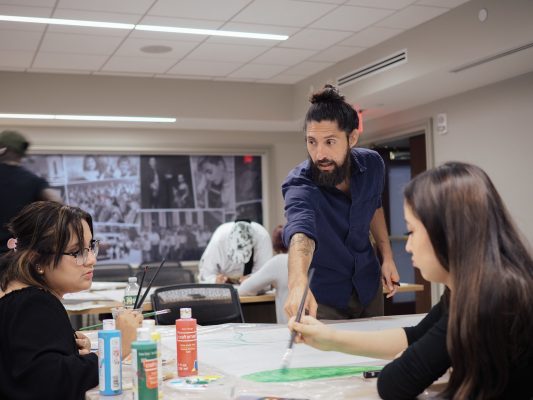 Alfonso Pérez Acosta, the artist-in-residence guiding the Richmond cohort, works with fellows on their art projects. (Photo by Edward Grattan)

Another former fellow and current mentor is Justo Antonio Triana, a classical civilization major in the College of Arts and Sciences. Triana joined the fellowship to grow creatively, become more aware of different cultures and realities, and further develop his writing in English. A member of last year’s poetry cohort, Triana is now passing on the lessons he learned about self-expression through writing to the current group of fellows. Triana’s mentorship position is made possible through a Syracuse University SOURCE research assistantship.

Nordquist says near peer mentors like Mohamed and Triana are critical to the future growth of the fellowship, both in Syracuse and Richmond. “I am hoping to cycle Syracuse University students who are former fellows into mentorship positions in Richmond so the fellows there have the opportunity to learn from peers who have benefited from the fellowship,” he says. The goal would then be to have current Richmond fellows become mentors to future Narratio cohorts in Virginia.

To maximize collaborative efforts, Nordquist is also working with Professor Katie Logan at Virginia Commonwealth University (VCU), who teaches in VCU’s Department of Focused Inquiry, to offer seminar classes to incoming college students. Just as the Central New York cohort is connected to resources at Syracuse University, fellows in Richmond are receiving similar support from VCU.

“Hopefully the relationship between Syracuse and VCU can grow between these interactions,” says Nordquist, who notes that many students who take part in the fellowship later go on to attend Syracuse University. “There’s great potential for the fellows in both Richmond and Syracuse to be connected to and matriculate at either SU or VCU.”

Looking to the future, Nordquist says they hope to expand regionally in New York state. They are exploring the possibility of establishing a cohort just east of Syracuse through a collaboration with the Midtown Utica Community Center, an organization that supports resettled refugees by connecting them with educational opportunities and other resources. The fellowship may also soon launch its first international cohort in Manchester, U.K., which Nordquist says would be connected to the Museum of Manchester.

To learn more, read about the Engaged Humanities Network and the Narratio Fellowship.