The University welcomes journalist and filmmaker Samantha Cheng for a special screening of her documentary, “Honor and Duty: The Mississippi Delta Chinese,” followed by a Q&A session on Friday, Sept. 16, in the National Veterans Resource Center at the Daniel and Gayle D’Aniello Building.

The evening will begin at 5 p.m. with a reception in the Grand Hall and Terrace, featuring remarks by J. Michael Haynie, vice chancellor for strategic initiatives and innovation, and Mary Grace Almandrez, vice president for diversity and inclusion. Following the reception, attendees will move to the K.G. Tan Auditorium for an introduction to the Mississippi Delta by English Professor Chanelle Benz and the screening of the documentary. Cheng will host a Q&A session for attendees after the film viewing. 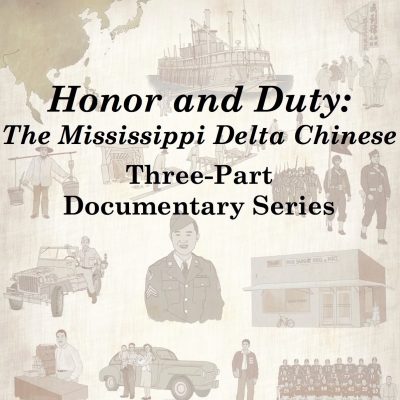 A special screening of Samantha Cheng’s documentary “Honor and Duty: The Mississippi Delta Chinese” will be hosted on campus on Sept. 16.

Cheng’s documentary tells the story of the Chinese who were recruited to work in the Mississippi Delta after the Civil War. It explores how the community steadily grew in the early part of the 20th century, as Chinese families across the Delta opened grocery stores that served both the black and white populations. Despite the Chinese Exclusion Acts (1882-1943), which barred both immigration and citizenship for Chinese, more than 22,000 Chinese and Chinese Americans served in WWII. Among the Mississippi Delta Chinese, 132 served in the Army, 24 in the Air Force, 19 in the Navy and two in the Marines. These unsung heroes discuss their lives before, during and after the war.

Cheng’s documentary led to her authoring the Chinese American WWII Veterans Congressional Gold Medal Act, which finally honored the veterans in late 2020. She is now working on the Chinese American WWII Veterans Online Resource and Archive, which began this year. This is a comprehensive four-year project funded by a division within the National Archives and Records Administration.

The project is identifying and validating the service records of the over 22,000 Chinese and Chinese Americans who served on behalf of the five branches of the U.S. Armed Forces and the U.S. Merchant Marine Corps during WWII. It is one of the largest grants using public funds to preserve Chinese American contributions to U.S. history.

Cheng comes to Syracuse at the invitation of Professor Mary Szto, who teaches Asian Americans and the Law at the College of Law. Szto and Cheng were childhood friends in the Chinese American church in New York City that Szto’s father founded, but were only reunited this year after losing touch for several decades.

According to Szto, Cheng’s work in telling the story of Asian American and Pacific Islander (AAPI) veterans dovetails with the D’Aniello Institute for Veterans and Military Families (IVMF)’s groundbreaking research on current AAPI veterans in their transition from service to civilian life. Szto says these stories and research are critical to addressing current anti-Asian and other racial violence in the U.S., and growing global tensions.