During a casual meal at a Mexican restaurant outside of Atlanta, four current Syracuse University students who consider themselves trivia experts—Sanjeev Uppaluri ’24, Zoë McCreary ’23, Emma Lambiaso ’24 and Adam Schulman ’25—gather at a table in early June, about to embark on a potentially life-altering mission.

These four relative strangers—only McCreary and Lambiaso knew each other before the meeting—were charged with the unenviable task of developing team chemistry, forging strong bonds, learning to trust one another and getting to know each other on a personal level as the quartet prepares for a potentially life-altering competition: the second season of NBC’s “Capital One College Bowl.”

At stake is a chance to win the majority of $1 million in scholarship money and demonstrate their knowledge of random facts before a national television audience.

Premiering on Friday, Sept. 9, College Bowl is hosted by Pro Football Hall of Fame quarterback Peyton Manning and his brother, Cooper, and pits teams of college and university students against each other in a battle of the brains. Every student receives tuition assistance for participating.

Uppaluri, McCreary, Lambiaso and Schulman (an alternate) are sworn to secrecy concerning how successful their team was on “College Bowl,” but you can follow along with the Syracuse University team when their first episode airs on Friday, Sept. 16, beginning at 8 p.m. ET. 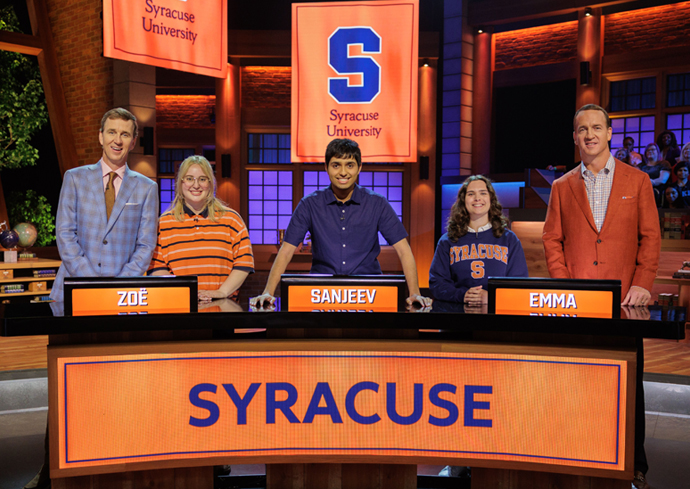 “It was definitely a once-in-a-lifetime experience. There was a lot of pressure, but I’ve always found I do really well under pressure, especially because I’ve done quiz bowl competitions for many years,” says Uppaluri, a Middle Eastern studies major in the Maxwell School who founded Syracuse University’s Quiz Bowl team in January 2022. 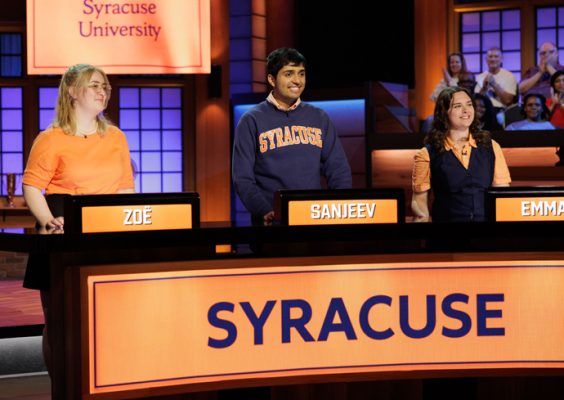 Featuring a variety of trivia subjects, students must work in teams to test their knowledge in a five-round tournament. The top two schools advance to the final round, where they compete to earn the “College Bowl” trophy and, more importantly, those scholarship funds.

All competitors receive some tuition assistance—the Syracuse participants earned at least $5,000 in scholarship help—with the winners taking home an even bigger prize: the majority of $1 million in scholarship money.

“I’ve always been a trivia person with lots of random knowledge that gathers in the back of my head. I had watched ‘College Bowl’ before going on the show, but it was a bit weird hearing Peyton Manning say ‘Syracuse Zoë’ when he called on me for an answer. Then it sunk in, I’m actually playing the game, not just watching it,” says McCreary, who is studying photography and art history.

Knowing the Orange team would need to work collaboratively if it wanted to be successful, that first team dinner was crucial for developing a team bond and cultivating the camaraderie necessary for “College Bowl.”

The teammates took turns discussing where they were from, their majors on campus and their interests—both in and outside of the classroom—but they each admitted the biggest unifying factor was their love of Syracuse University.

“We spent the first few days trying to figure out each other’s trivia strengths and weaknesses while getting to know each other better. Being there, going through this together was a great bonding experience, and what drew us closer together was our school spirit. We have a lot of pride in Syracuse, and we wanted to show up and make our University proud. I was really proud of our team,” says Lambiaso, a magazine, news and digital journalism major in the Newhouse School.

Each member brings a different strength to the team. Uppaluri considers himself a trivia generalist with a specialty in geography. McCreary excels in film and art history knowledge, while Lambiaso is well-versed in music, pop culture and “random facts that get stuck in my head.” 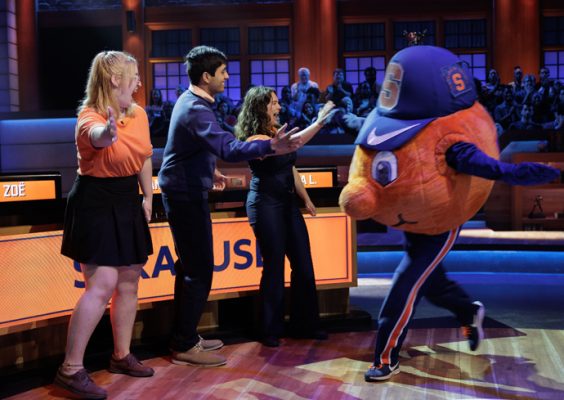 From left: McCreary, Uppaluri and Lambiaso pose with Otto on the set of NBC’s “Capital One College Bowl.” (Photo courtesy of Steve Swisher/NBC)

To prepare for the competition, Syracuse’s team spent hours watching old “Jeopardy!” episodes, practicing buzzing in and providing the correct answer to a wide range of topics.

“That helped us figure out our team’s strengths and weaknesses and showed us what topics we needed to study up on some more. But even with all our practicing, once we got on set and started competing, we had absolutely no idea what was coming for us!” McCreary says.

Uppaluri credits his father, Srini, with getting him hooked on trivia when he brought home an almanac full of random facts when Sanjeev was in grade school.

“I don’t want to limit myself to one category when I know that all categories really do interest me. I have a great curiosity for knowledge. If someone says or mentions something that I don’t know, I need to look it up immediately. It really bothers me to not know what that is. I’ve had an itch to learn about everything, but the more I learn, the more I realize I don’t know that much,” Uppaluri says.

During the taping, the Syracuse squad was surprised by someone who knows a thing or two about competitions and school spirit: Otto, the University’s beloved mascot.

Regardless of how much scholarship money they won, each of Syracuse’s contestants said they enjoyed the experience and emerged with a few new friends and a greater appreciation for what it takes to compete on the national stage.

Besides Syracuse, this season’s “College Bowl” features teams from: