“I would recommend Syracuse University to any veteran,” says Nuber, who earned a bachelor’s degree in international relations from the Maxwell School of Citizenship and Public Affairs.

Nuber’s Orange journey starts back in Sylvan Beach, New York, when he had the realization that he wanted to pursue a different career path than his peers. 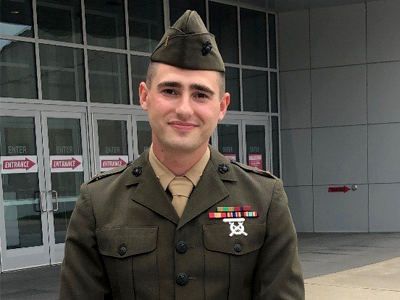 Inspired by his time in the U.S. Marines, Jordan Nuber ’19 earned a bachelor’s degree in international relations from the Maxwell School.

“I enlisted in the Marine Corps when I was 18. So right out of high school, I did four years enlisted active duty as a data systems administrator,” Nuber says.

His time as a Marine gave Nuber an appreciation for communications on a global scale, so once he was done with active duty, Nuber decided to enhance his understanding of global communications issues. Maxwell was the perfect choice, as it was both close to Nuber’s home and offered a chance to build upon the lessons learned in the Marines.

“It helped me put into context what the military was doing as a whole and kind of gain some worldly perspectives, which contextualized a lot of my service,” Nuber says.

Going back to school certainly came with its challenges, but four years of military service helped with the adjustment.

“It helped me take things as seriously as possible and really dive into all the opportunities that were available,” says Nuber.

Two Maxwell classes in particular had a profound impact on Nuber: Globalization in the Information Age, which served as a compliment to the work he had done with the Marines; and Russian History, which covered World War I to the Cold War.

“At the time it was just so interesting to learn about how their society had developed, and now today with what is happening in Ukraine, I understand a lot of that context on a deeper level,” Nuber says.

Many of Nuber’s friends on campus were fellow veterans, which “was easy to make friends (on campus) because the veteran community here is so robust,” says Nuber.

Among the highlights from his days on the Hill: networking with professionals in the international affairs profession, going on career-focused trips and spending time with others in the military, especially through programs and events in the National Veterans Resource Center at the Daniel and Gayle D’Aniello Building.

“The resources available to military-connected students, and all students, really set Syracuse University apart. They make the world your oyster,” says Nuber, who still bleeds Orange.

Thanks in part to his time at Syracuse, Nuber is both excited to stay connected to his alma mater, and to hopefully introduce other military-connected individuals to the University. Nuber believes the streamlined services offered through the Office of Veteran and Military Affairs make for one of the smoothest experiences a veteran or service member could experience when going back to pursue a degree.

Nuber’s time in Okinawa is just beginning. He hopes to develop into the best platoon commander possible over the next three years, and is looking forward to continuing to learn from the other Marines around him. When his time in Okinawa is finished, Nuber, who will have one year left on his post-9/11 GI Bill, is considering returning to Syracuse University to earn a master’s degree in information systems through the School of Information Studies.

“It is an amazing opportunity I have from the GI Bill, and Syracuse University is the place I want to take advantage of that opportunity,” Nuber says.