Before Sir Elton John, the Rocket Man with the instantly recognizable voice and bedazzled sunglasses, blasts off into retirement, he’s giving Central New Yorkers one more excuse to prove that Saturday night’s alright for rocking out to classic songs from a decorated catalogue that spans more than 50 years.

John will bring his up-tempo style of music and phenomenal piano skills to Syracuse University’s JMA Wireless Dome Saturday evening for one of his last shows in the country as the legendary musician’s “Farewell Yellow Brick Road: The Final Tour” roars on with a visit to Syracuse. 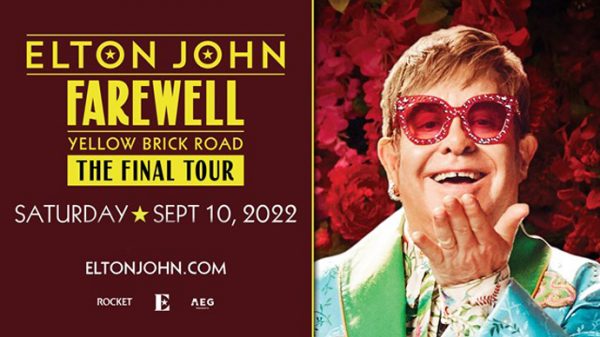 Sir Elton John is playing the JMA Wireless Dome on Saturday, Sept. 10 as part of his “Farewell Yellow Brick Road: The Final Tour.”

The Rock and Roll Hall of Famer will make his sixth visit to the City of Syracuse and will entertain fans on campus for the third time. Previously, John, 75, played at the Dome in 1992, at the War Memorial in 1970, 1971 and 2000, and performed alongside fellow piano legend Billy Joel before a sold-out Dome crowd in 2001.

“It’s unbelievable for us to host Elton John on his farewell tour. He’s played some great shows here before, and he’s a performer who will put on a once-in-a-lifetime show for our people to see,” says Vice President and Chief Facilities Officer Pete Sala. “The attendance is great. We were their top-selling show in the country. Every time we release seats, which we’ve been doing because of slight modifications from the original manifest, they sell instantly. We’re going to be around 36,000 people for this show.”

The last time John visited upstate New York was a stop in Buffalo in 2018 and a performance in Albany in 2019, both part of “Farewell Yellow Brick Road: The Final Tour.” His Syracuse performance marks the only time John’s farewell tour will be in the Central New York region.

“I’m going to go out in the biggest possible way, performing at my very best with the most spectacular production I’ve ever had, playing in places that have meant so much to me throughout my career. … I can’t wait to see you all on the road one last time. This has been an incredible tour so far, through the most amazing highs, and I look forward to making more wonderful memories with you at these final shows,” an excited John told his fans when he announced these tour dates in June 2021.

The process of setting up for the show started almost immediately following the Orange football team’s 31-7 win over Louisville on Sept. 3.

“We do whatever we can to make the promoter feel comfortable. We hear that a lot, that our staff [make this] a very easy venue to work in and that they can’t wait to come back to Syracuse,” Sala says.

Judging from the posted set lists from previous “Farewell Yellow Brick Road: The Final Tour” stops, fans of John can anticipate the dynamic performer to delight them with hits like “Tiny Dancer,” “Rocket Man (I Think It’s Going to Be a Long, Long Time),” “Crocodile Rock,” “Bennie and the Jets,” “Levon,” “Don’t Let the Sun Go Down on Me,” “Candle in the Wind,” “I’m Still Standing,” “Your Song,” and more from his musical career.

To ensure everything runs smoothly, Sala urges fans without a JMA Dome parking pass to head to the Skytop parking lots on South Campus, where parking is available for $25. Free shuttle transportation is provided between the College Place shuttle drop-off and the Manley and Skytop parking lots starting at 4 p.m. Masks are optional for passengers traveling on campus buses, trolleys and other forms of University-provided shared transportation.