The Syracuse University women’s volleyball team made its 2022 debut over the weekend at the Charlotte Invitational in Charlotte, North Carolina, and for the first time in more than a decade, the Orange have a new head coach: Bakeer Ganesharatnam, the seventh women’s volleyball coach in school history.

Ganesharatnam boasts an impressive coaching resume and comes to Syracuse after leading the Temple University’s women’s volleyball program to 173 victories over the last 11 years, including four seasons with 20-plus wins. Ganesharatnam has a reputation as a strong recruiter, and as a coach who helps his student-athletes achieve success on the court and in the classroom. 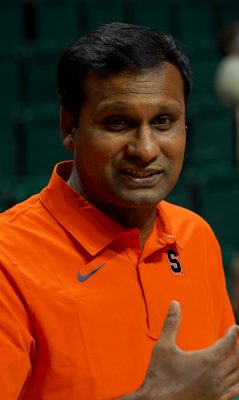 Hired to take over the reins of the Orange on June 27, Ganesharatnam inherits six returning student-athletes from last year’s team that went 17-13, including All-Region outside hitter Polina Shemanova. The hard work, commitment and dedication displayed by all of his student-athletes, from his first day on the job, have left a lasting impression on Ganesharatnam.

“The first thing I noticed, and this was from the very first meeting I had with the student-athletes, the returners who were remaining on the roster, is they were completely open to this process. They were excited, and they wanted to succeed. They were welcoming to me and the approach we had, and they were completely bought in from the first moment. That has carried throughout this whole process. We have a group of players who are willing to work hard, who are willing to make sacrifices, who are 100% bought into what we want to do and who are hungry for success,” says Ganesharatnam.

With the 2022 season underway, Ganesharatnam sat down with us to discuss what made this position so appealing, why he was the right person to lead the Orange, how he’ll use analytics to help his team get better and why his team enjoys a unique home-court advantage playing home matches in the Women’s Building.

Check out episode 113 of the “’Cuse Conversations” podcast featuring Bakeer Ganesharatnam. A transcript is also available.