Syracuse University’s College of Law proudly has among its student body three Army Reserve Officers’ Training Corps (ROTC) students–Ray Scarlatta L’23, Anthony “Ben” Emmi L’23 and David Trombly L’24—who are part of the U.S. Army’s Educational Delay (Ed Delay) program. All three were selected from a pool of 20,000 cadets to be among 130 Ed Delay cadets nationwide. This competitive nationwide program delays active duty service for cadets while they attend law school. The College of Law has the most Ed Delay cadets of any law school in the country.

The Ed Delay program is designed as a pathway for ROTC cadets into the U.S. Army Judge Advocate General’s (JAG) Corps, the military justice and military law branch of the U.S. Army. During their third year of law school, cadets compete for selection into the JAG Corps. Selection for Ed Delay does not guarantee selection for the JAG Corps, but does greatly increase a student’s chances.

“Many ROTC cadets learn about the JAG Corps and seek out the opportunity to attend law school right after their undergraduate studies instead of commissioning directly onto active duty in another branch. Then the students next explore what law school would best prepare them for the JAG Corps. We are so proud that the Syracuse University College of Law has become a school of choice for Army Ed Delay students,” says Beth Kubala, executive director of the Betty and Michael D. Wohl Veterans Legal Clinic in the College of Law. “Here at the College of Law we have several faculty members with JAG experience and coursework that allows students to focus on national security law. Couple that legal education and mentoring with the university’s support network for military-connected students and our ability to prepare these students to serve as military lawyers is unmatched.” 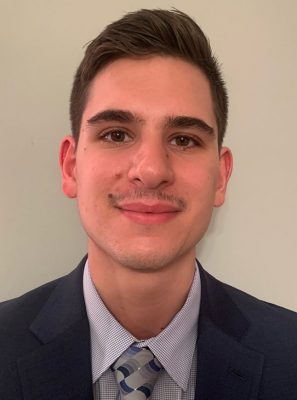 Scarlatta came to Syracuse University after graduating with a bachelor’s degree in global supply chain management and a minor in law studies from Clarkson University, where he was a ROTC cadet. At the College of Law, he was designated as president of the National Security Student Association for the 2021-22 academic year, and in 2021 participated in an externship with the 10th Mountain Division at Fort Drum. This year, Scarlatta was selected as the next editor-in-chief of the Syracuse Law Review.

“I applied to the Ed Delay program because I decided when I was a freshman in college that I wanted to be an officer in the JAG Corps,”Scarlatta says.. “I want to be an attorney in the JAG Corps because of the sheer breadth of legal opportunities and experiences that the Army offers young attorneys that private law firms cannot. On top of this breadth of legal experience, I get to represent and assist the best clients in the world–U.S. Army soldiers.” 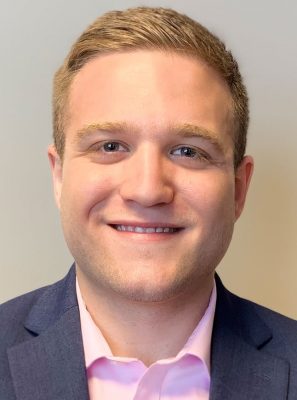 Emmi was a ROTC cadet at Mercyhurst University, where he graduated with a bachelor’s degree in criminal justice and Spanish language before enrolling in the College of Law. He has helped with informational sessions for ROTC cadets, and spent last summer interning for a criminal law firm. Emmi also served as a research assistant for William C. Banks, professor of law emeritus and founding director of Syracuse University’s Institute for Security Policy and Law.

After receiving his bachelor’s degree in political science/international relations and criminology from Stonehill College, Trombly enrolled in the Ed Delay program. He is an active member of the Corporate Law Society and National Security Student Association. 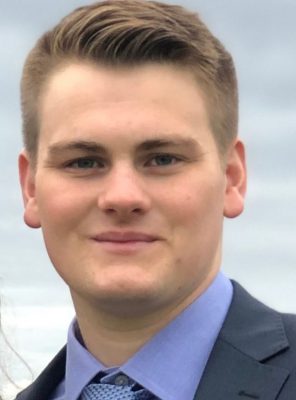 “Syracuse University was touted as a place military-connected students have not only great opportunities to succeed, but are also surrounded by student, staff and faculty veterans,” says Trombly. “Being accepted into the Ed Delay program is a major step in being able to serve as a JAG. At Syracuse, there are former JAGs on campus who will help all of us in the program succeed at a level that optimizes our chances of one day becoming JAGs ourselves.”

“Ray, Ben and David epitomize why Syracuse University is the best place for veterans and military-connected students alike,” says Kubala. “Our hope of course is that through our programs and opportunities at the College of Law that all three of these amazing young attorneys will have rewarding careers as Army JAG officers.”

“Syracuse University College of Law’s ability to attract and produce high performing JAG candidates showcases their unwavering commitment to our military community,” says LTC Aaron Lykling, head of the Army Judge Advocate Recruiting Office. “The Ed Delay program is often seen as the prominent path to becoming a JAG officer. Scarlatta, Emmi and Trombly are an example of the type of phenomenal talent that the program attracts each year.”

Brigadier General Ronald D. Sullivan, an Army Judge Advocate currently serving as the chief judge (IMA) of the U.S. Army Court of Criminal Appeals, is a 1993 Army ROTC graduate of the Howard University Bison Battalion.  Sullivan entered the Army ROTC Educational Delay Program and graduated from the University of Kansas School of Law in 1996.  “As an Army ROTC distinguished military graduate, I was really excited to be selected for assignment to the Field Artillery Branch, but more than anything I wanted to be an Army JAG attorney,” Sullivan says. “For or me, the Army Ed Delay program was the best path to achieve this personal goal.   The trust that the Army placed in me, by affording me the chance to pursue my dream to practice law as a member of the Army JAG Corps Regiment, was a daily motivator throughout law school.”