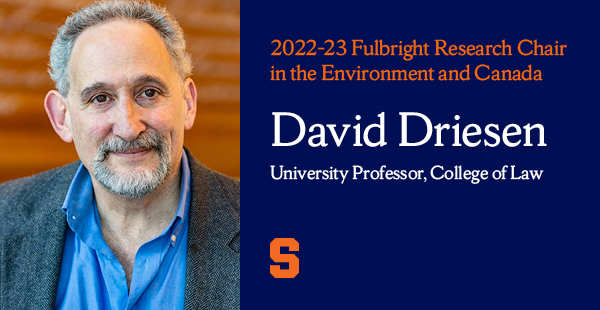 Over the past five years, the state of American democracy and politics drove University Professor David M. Driesen’s focus more toward the constitutional law side of his expertise. Now, his receipt of a 2023 Fulbright Research Chair in the Environment and Canada means that the College of Law professor can spend a semester in Canada studying carbon pricing (such as emissions trading and carbon taxes), dedicating time back to research in his other areas of specialty—environmental law and the economics of law.

Driesen received word of his Fulbright award earlier this summer. He heads to Canada in September to spend the fall semester at the University of Ottawa. With faculty there and at its Smart Prosperity Institute, he’ll consult with program developers, policy analysts and environmental researchers to gauge the effectiveness of carbon pricing in reducing environmental impact in Canada and elsewhere.

He will also have the opportunity to work with Michael Mehling, deputy director of the Massachusetts Institute of Technology Center for Energy and Environmental Policy Research. Mehling is an expert on comparative and international climate policy design and implementation who has worked on climate issues worldwide and has advised agency and government decision-makers in over a dozen countries.

Carbon pricing programs aim to reduce carbon emissions, mainly from fossil fuel production and use by making emitting greenhouse gases more expensive. They are implemented to attempt to reduce global warming, which is currently causing an environmental and public health crisis in many countries.

Driesen plans to continue reviewing existing carbon pricing initiatives, reports and program structures and to speak with program and policy analysts involved in implementing Canada’s carbon pricing programs. He wants to develop a conceptual framework unifying and critiquing claims in the literature that carbon pricing has proven rather ineffective.

In the United States, Driesen says, only the Northeastern states and California have any type of emissions trading or carbon pricing system in place. By contrast, Canada requires all provinces to adopt some sort of climate pricing program. For that reason, he anticipates that Canada will provide “a good laboratory for looking at how well those programs are working.”

“It’s important to examine critically our assumptions about climate policy now that we’ve had decades of experience with it,” Driesen says. “This Fulbright provides the opportunity to gain a different perspective by interacting with different scholars and different countries than I might otherwise. I’m very excited about this and very grateful to Syracuse University for supporting it.”

“Professor Driesen is a leading scholar in environmental law and this support will further his thoughtful research in carbon pricing and climate change. Fulbright Scholarships are highly competitive and receiving one reflects the value and urgency of an applicant’s research,” says College of Law Dean Craig Boise. “I look forward to David’s continued scholarship in this area and the impact it will have on our students.” 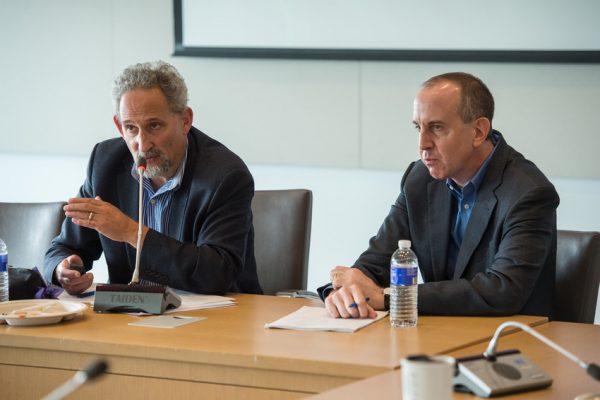 Driesen expects his undertaking to affect a prior academic experience that he’d like to resume—teaching an interdisciplinary climate course in the College of Law, with faculty members from the Maxwell School of Citizenship and Public Affairs, as well as with environmental scientists at the University. “I haven’t done that in the last few years and I’m hoping to get back to it. This experience will certainly influence how I teach that course,” he says.

Driesen has extensive experience in environmental law. He is a member scholar with the Center for Progressive Reform. He blogs on climate disruption issues for that organization and for RegBlog. He has worked as a consultant for the organization American Rivers and other environmental groups on Clean Water Act issues and has testified before Congress on implementation of the 1990 Clean Air Act Amendments.

He has written numerous amicus briefs in Supreme Court cases and has represented former Sen. Hillary Clinton and other legislators in Clean Air Act litigation in the D.C. Circuit. He also engages in public service defending democracy, environmental law’s constitutionality and efforts to combat the climate crisis. Earlier in his career, he was a senior project attorney for the Natural Resources Defense Council in its Air and Energy Program. Driesen also clerked for Justice Robert Utter of the Washington State Supreme Court and worked in the Special Litigation Division of the Washington State Attorney General’s Office.

Driesen joined Syracuse University in 1995. He holds a J.D. from Yale Law School, a M.Mus. from the Yale School of Music and a B. Mus. degree from the Oberlin Conservatory.