Purposeful Persistence, Perseverance and Integrity: A 20-Year Journey Toward a Degree 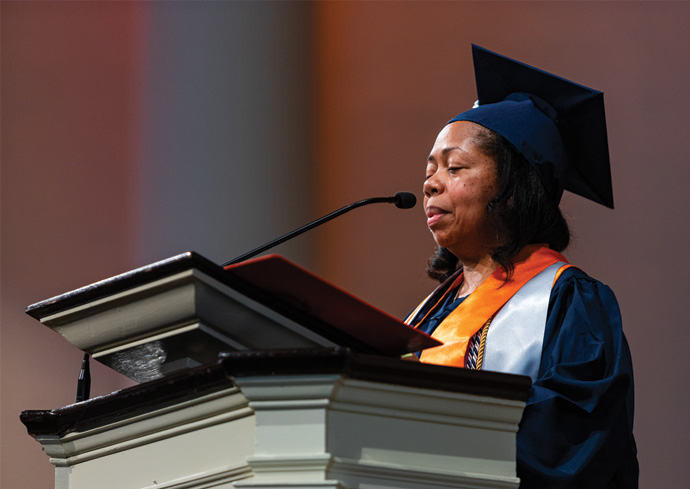 Victoria Baratta ’21 delivers her remarks at the Spring 2022 Convocation ceremony at the College of Professional Studies.

Victoria Baratta ’21 gripped the edge of the podium. While the applause dwindled down, a smile peeked out of Baratta as she adjusted the microphone. Rays of sunlight spilled into Hendricks Chapel, casting a glow onto the crowd as they waited to listen to the College of Professional Studies Spring 2022 Convocation student speaker. While echoes of children murmuring to their parents adorned in graduation regalia floated to the ceiling, Baratta scanned the room filled with students like her—soon-to-be graduates who studied part-time while juggling the side quests of life.

Many spent their evenings in front of a computer and books after a fatiguing day of work. Or some were like Baratta, studying alongside their college-aged children, learning about each other’s goals. Despite their different lives, they all gathered for the same reason: to celebrate their educational achievements studying part-time through the College of Professional Studies.

“When I was younger, education was always one of the most important tools to have in your toolbox,” Baratta said, beginning her speech. “Knowledge is power, and that power is something no one can ever take away from you.”

Baratta’s words held weight as she sunk into childhood memories.

“As a little Black girl, I was never seen. My mother moved us to a neighborhood where there were no other people of color,” she said. “The kids looked at me like I was an alien.”

“Purposeful persistence, perseverance and integrity” was the mantra her mother spoke to her daily. She held tight to those words, using them as a shield to fight off the negativity. The mantra soon became a compass that navigated her journey where she learned to juggle multiple male-dominated careers all while raising a family and completing a psychology degree at Syracuse University.

Lessons Along The Way

Head-to-head with a former bodybuilder twice her size, Baratta reflected on how she had gotten to this place in her life.

As a teenager, Baratta’s plan was simple. She would graduate high school, join the Army and simultaneously attend the University of Maryland. With military tuition benefits, it was an affordable option and offered stability.

But instead, Baratta found herself at age 20 sparring with a man of pure muscle at the Syracuse Police Academy.

What was meant to be a hometown visit while Baratta was in the middle of college soon became a recruitment opportunity for her family friend who was deputy chief of the Syracuse Police Department. After scoring in the high 90s on the police assessment, Baratta was awarded a job offer, but she didn’t intend to take the job. Persistent, her friend and deputy chief offered a list of benefits, hoping something would ignite her interest.

“He said it will help pay for college. I heard that and I thought, ‘this is what I wanted all along,’” Baratta said. “That’s why I was in the military.”

In 1985, Baratta became one of the first Black female police officers on Syracuse’s police force.

After transferring to Syracuse University and the Army Reserves, Baratta began what would be a 28-year career in street patrol and community relations.

Working diligently to prove she could keep up with the boys, Baratta faced discrimination from her peers and the community around her. One day, during field training, a colleague demanded she sit in the back of a police car.

“They weren’t discriminating because they didn’t like women,” Baratta said. “They felt like they were protecting us.”

Lined with hard plastic seats and a thick protective wall that distinctly defined who was in charge, Baratta refused to sit in the backseat because she knew her place. It was up front, protecting the citizens of Syracuse, some of whom also judged Baratta’s ability to protect and serve due to her petite stature.

“I went on a call once where the complainant answered the door and yelled that he called the police, not the campfire girls,” Baratta said. “He then called the police department and told them to never send me again. He wanted a ‘real’ police officer, a man.”

But Baratta didn’t let the badgering stop her. Instead, she navigated these moments using the psychology lessons she learned during her University classes. At the time, every challenge Baratta encountered at work invariably coincided with her psychology classes. Much like a lighthouse beaming in the distance, the coincidences repeated and reminded her that she was headed exactly where she was meant to be. Both Baratta’s career and psychology classes came effortlessly to her, proving she was born to treat the emotional pain of those around her and guide them to an era of hope and positivity.

“I feel like I’d been using my degree before I even got it,” Baratta said. “Growing up, I wanted to be a doctor. The doctor was the helper. Once I found a couple of psychology classes, I was like ‘This is it.’”

Baratta wanted to be a helper, and for her, it was achievable with a psychology degree.

When Baratta wasn’t patrolling, she was mentoring and assisting families through anti-drug and anti-gang programs.

“I got to be a part of helping the kids go down a better path, but also helping the parents who were in that culture but didn’t have the resources to get out,” Baratta said. “I got to work on both sides of the coin, and it was very fulfilling. I felt like that psychology degree helped me to connect with people in a way that I wouldn’t have been able to.”

Study Sessions at the Dinner Table

It was another evening in the Baratta household. The family sat at the dinner table while Baratta and her daughter studied side by side, each immersed in their Syracuse University studies. Baratta’s husband pulled up a chair. Acting as Baratta’s tutor for the night, he cheered her on when she faced an obstacle.

After taking a step back as a police officer and working part-time at an Apple retail store, it was those moments that made Baratta realize why she was completing her degree. Having an established career, many might wonder why she would continue her studies, but for Baratta, college wasn’t just about getting a degree. Education offered a new perspective that acted as a guide to navigating the complex moments of life.

“Challenges inspire me,” Baratta said. “When someone tells me I can’t do something, I am on fire to prove them wrong in the biggest way that I can.”

As a part-time student, Baratta accepted there would be a lack of connection with her classmates.

“I felt like I was part of the school, but not technically part of the community,” Baratta said.  “Then I got on the dean’s list for the first time.”

In the College of Professional Studies, making the dean’s list wasn’t just an acknowledgment of excellent grade point averages, but instead provided an opportunity to celebrate students and their achievements.

Hesitant to attend an in-person ceremony honoring dean’s list students, Baratta bucked up, recalling the endless hours she had spent poring over flashcards and textbooks. The little victories deserved to be celebrated.

“I really felt like I was going to be this wallflower standing in the back of the room,” Baratta said. “But it wasn’t like that at all. They welcomed me and made me really feel like I was part of the University.”

It was the feeling she had been chasing since childhood and it was here in the form of mingling with her peers and academic mentors. Surrounded by students just like her, the feeling of invisibility washed away as she listened to the stories of other part-time students.

“Our motivation changes over the years, but our drive stays the same,” Baratta said.

“Purposeful persistence, perseverance and integrity,” Baratta recited back to the crowd at Convocation.

Her mother’s mantra continued to guide her through the last moments of her academic journey. From here, she would pass down these words of wisdom in a cadet program hosted by the Syracuse Police Department and mentor a new generation of changemakers.

Baratta surveyed the room one last time. She finally made it to the top after conquering an uphill battle, her mind a little bit wiser and skin a little bit thicker. It was time for her and the other graduates to close this chapter and begin a new one.

“Goals we set are goals we get,” Baratta said. “Make a plan, set the goal, achieve the goal. This is the equation for success.”