Supporting a Pathway to Success for Resettled Refugee Youth in CNY

In 2019, Khadija Mohamed was among the first cohort of Narratio Fellows, participating in a program designed to help resettled refugee teens in Syracuse share their stories through writing and art.

Two years later, Mohamed became an artist-in-residence with the program, and now, the rising Syracuse University junior is a research assistant and co-designer of the curriculum for Write Out, a creative writing program for students across the city. 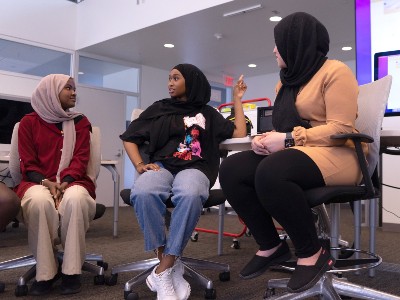 While Mohamed’s peer mentorship is largely the result of her own initiative, Brice Nordquist, director of the College of Arts and Sciences’ (A&S’) Engaged Humanities Network (EHN), hopes to turn that participation into the norm.

With an $18,350 grant from the Central New York Community Foundation, EHN wants to interconnect elements of three programs run in collaboration with the North Side Learning Center, both to increase participation and bolster mentorship and support for resettled refugee youth to pursue higher education.

EHN was founded by Nordquist in 2020, an outgrowth of his own community engagement since moving to Syracuse in 2013. It serves as an umbrella organization that seeds, supports and connects teams of undergraduate and graduate students, faculty and staff working on community-based arts and humanities projects with historically marginalized communities in Syracuse and Central New York. 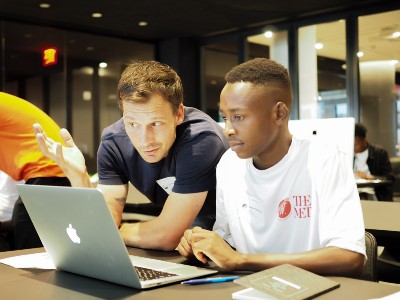 “Each of these projects works with different age groups. The grant funding will help us build a structure to interconnect the projects in terms of the curriculum, collection of the student work and the assessment of the programs,” says Nordquist, associate professor of writing and rhetoric and the Dean’s Professor of Community Engagement in A&S. “Our goal is to be able to move students through these enrichment programs from middle school all the way through early college so that they have sustained, coherent humanities and arts projects and experiences.”

The grant supports a strategic planning retreat, which will inform the hiring of an educational consultant for assistance with curricular design to meet defined objectives. There are also funds earmarked for the creation of a digital portfolio to store and showcase student work. Nordquist says many older students have used creative work produced in these programs as the basis for college or scholarship applications. The proposed e-portfolio will store all of a student’s projects from their EHN programs for the duration of their participation—potentially from age 11 until their early 20s.

“The e-portfolio is a way of collecting their work, specifically intended so the student can use it for educational and professional opportunities beyond their time at North Side,” says Nordquist.

There are also funds to support peer mentorship. “That’s a big key to this,” he says. “This structure will create a process for program participants to cycle back as paid leaders, so that over time, these programs are sustained by the community itself, rather than being driven by Syracuse University representatives.”