How much would you sacrifice to achieve your dreams?

When Nasser Paydar ’79, G’81, G’85 was about to graduate from high school in Iran, his father, Hossein, made the ultimate sacrifice to set his beloved son up for success. Hossein worked hard his whole life to take care of and provide for his family, but he lamented his lack of a college degree and wanted to ensure nothing held his son back from achieving his goals.

One night, as Nasser was finishing up his high school studies, father and son engaged in a conversation that would forever alter Nasser’s life and set him on a path that would open up the doors of higher education to not only Nasser, but countless other students.

Even though he knew there was a good chance he might never see his son again, Hossein put his son on an airplane, sending him more than 6,300 miles across the world to Syracuse to study mechanical engineering at Syracuse University. 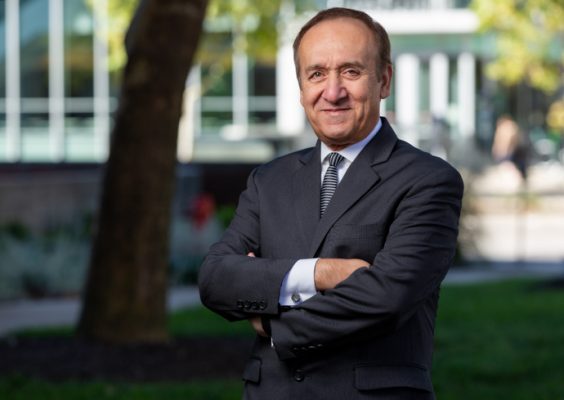 From those humble beginnings, Paydar carved out a highly successful and decorated career in higher education, spending nearly five decades as a well-respected leader on college campuses, including serving as chancellor at Indiana University-Purdue University Indianapolis (IUPUI) and Indiana University East, and executive vice president of Indiana University (IU).

Earlier this week, Paydar’s appointment to serve as the U.S. Department of Education’s assistant secretary for postsecondary education was confirmed, completing a process started when Paydar was nominated for the position by President Joseph L. Biden Jr. L’68.

“It’s an honor and a privilege to serve our country and to serve our students and universities in this position. I’ve spent the last 47 years on college campuses, and I really think I can make a difference in our colleges and universities at the national level,” says Paydar, who started his new position on Monday.

Fulfilling a Promise to His Father

It’s the culmination of a promise Paydar made to his father nearly five decades ago. That fateful night, as Paydar confronted an uncertain future in a foreign country, his father made him promise to “go all the way” with his education.

“I know it must have been hard for my father, but I’m forever grateful to him. My father taught me the value and the importance of higher education. My pursuit of higher education was so important to him that he was willing to risk not seeing his child again. I’ve spent my career and I’ve dedicated my life to helping as many people have access to a higher education degree as possible,” says Paydar, who earned his bachelor’s, master’s and Ph.D in mechanical engineering from the College of Engineering and Computer Science.

While at Syracuse University, Paydar says he experienced the highlight of his life: meeting his now wife, Niloo ’80, G’83. The couple has two children, both of whom have earned a Ph.D.: Omeed and Naveed.

Besides being an avid believer in the power of higher education, Paydar also inspired his children in another, equally important way: “Even though my sons have never been to campus, they are the strongest supporters of [head men’s basketball coach] Jim Boeheim ’66, G’73,” says Paydar.

All these years later, Paydar knows his father would be proud to see the work Nasser has done to open the doors of higher education to as many people as possible.

“I owe everything to the education I received at Syracuse University and to the sacrifices my father made. The faculty at Syracuse were like family to me, and Syracuse taught me how to interact with others, to work well in small groups and to collaborate with partners. Those are the skills you need in a leadership position, and those are the skills that serve me well today,” says Paydar, who served on the board of directors of the American Association of State Colleges and Universities.