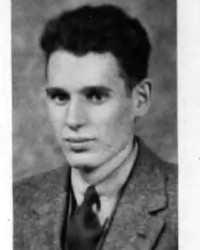 More than 77 years after his death, a Syracuse University alumnus was finally laid to rest at Arlington National Cemetery. First Lt. Myles Esmay ’40 fought bravely for the U.S. Army in the Pacific Theater during World War II. While defending an airfield against Japanese forces in Burma (now Myanmar), he and many other soldiers lost their lives.  Though most of the remains were first buried at U.S. Military Cemetery at Kalaikunda, India, and then transferred in 1947 to the National Memorial Cemetery of the Pacific in Honolulu, Esmay’s remains went unidentified for decades. Last year, Esmay was formally identified by the Defense POW/MIA Accounting Agency.

On Aug. 1, 2022, loved ones, family and friends gathered at Esmay’s gravesite to celebrate and honor his life and service. Retired U.S. Army Col. Ron Novack, executive director of Syracuse University’s Office of Veteran and Military Affairs, and Dr. Ruth Chen, professor of practice in the College of Engineering and Computer Science, were on hand to pay respect to Esmay’s family on behalf of the Syracuse University community. 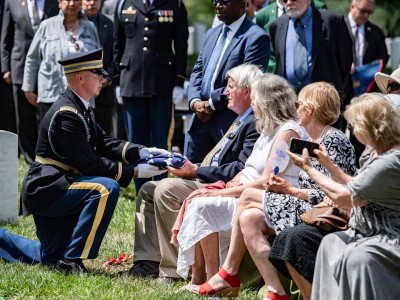 The flag from Esmay’s casket is presented to his family during the Arlington service.

Esmay had deep ties to Central New York. A Utica-area native, he received a scholarship to the New York State College of Forestry—originally founded within Syracuse University. As a student, he joined ROTC, worked for the school newspaper and served as the director of what was then known as the Forestry Club. After graduation with honors in June 1940, Esmay served as an infantry engineer in Company B of the 236th Engineer Combat Battalion.