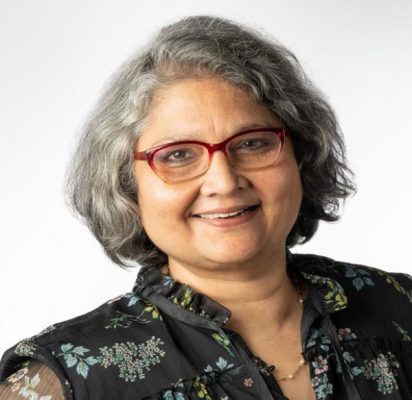 Tula Goenka, professor of television, radio and film (TRF) and director of the TRF graduate program, has been named the inaugural Dean’s Leadership Fellow at the Newhouse School. In this role, Goenka will focus on the engagement, inclusivity and support of the school’s international student community.

“I first came to the United States as a Newhouse international graduate student in 1984, and it is truly an honor for me to be appointed as the first Dean’s Leadership Fellow 38 years later,” Goenka says. “I have lived through the trials and tribulations of not only moving to a foreign country and learning in a brand new educational system but also simultaneously trying to figure out how to live day-to-day so far from home. It’s more than a culture shock, and I am thrilled to help our Newhouse international students have a smoother transition so that they can flourish and blossom here.”

Goenka joined the Newhouse faculty in 1996 following a career in filmmaking that included work as an editor for directors Spike Lee, James Ivory and Mira Nair, among others. Her own documentary work includes the award-winning PBS film “Dancing On Mother Earth,” about singer/songwriter Joanne Shenandoah; “El Charango,” about the musical instrument from Bolivia; and “Likhiya: Writing Stories With Mithila Art,” a series of short films on artists from Madhubani, Bihar in India. She is the creator and director of the “Look Now Project,” which uses visual storytelling to highlight the resilience of all those affected by breast cancer—patient, survivor, caregiver, medical practitioner and advocate. She earned the Chancellor’s Citation for Excellence Award for Engaging the World in 2009.

Born and raised in India, Goenka is involved with the South Asian community in the U.S. She served as co-director of the federally funded South Asia Center, part of the Maxwell School’s Moynihan Institute of Global Affairs, from 2012-14. She is affiliated faculty with the Department of Women’s and Gender Studies and the Minor in South Asian Studies in the College of Arts and Sciences.

Goenka is the author of “Not Just Bollywood: Indian Directors Speak.” In 2008, she created the Syracuse University Abroad program Bollywood Snapshots, and has taken more than 50 Newhouse students to Mumbai for the month-long immersion. She was the Newhouse Endowed Chair of Public Communications from 2016-19. She is the founder and co-director of the annual Syracuse University Human Rights Film Festival, now in its 20th year.

“Throughout her career, Tula has been a passionate supporter of our Newhouse students, particularly those from other countries,” Lodato says. “She will be outstanding in this role, giving the needs of our international students a stronger voice at the highest levels.”

Newhouse School dean Mark J. Lodato today announced that Beverly Kirk, a seasoned professional with more than two decades of experience in journalism, has been named Director of Washington Programs. In this position, Kirk will expand and lead the Newhouse…

The Newhouse School ranked as the second most awarded school internationally in the Communication Arts Advertising Annual 62, winning two out of the 10 student awards given and five Shortlists. “The students at Newhouse continue to impress,” said alumnus Dan Lucey…

Ashley Smith-Purviance’s G’14 interest in researching education systems and policies—and especially their impact on youth of color and Black girls—stems from her study abroad experience while completing an M.S. in higher education at the Syracuse University School of Education. “My…

In a panel discussion last week, faculty experts from the Maxwell School of Citizenship and Public Affairs shared expertise and insight on the recent Supreme Court ruling in Dobbs v. Jackson, which overturns the precedent set by Roe v. Wade…