From the US Army to Syracuse University, Chaplain Captain Stoney Douthitt Loves to Serve 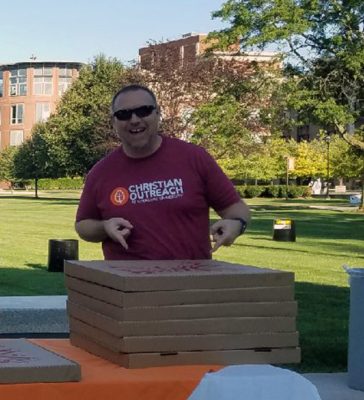 After serving for eight years as an active-duty chaplain in the U.S. Army, Chaplain Captain Stoney Douthitt G’22 came to Syracuse University during the summer of 2021. In the past year, he has been steadily working toward a dual master’s degree from the Whitman School of Management and the Maxwell School of Citizenship and Public Affairs. Hendricks Chapel was one of his first stops on campus, where he was warmly welcomed as a Baptist chaplain, working alongside Devon and Kate Bartholomew.

Douthitt never planned to join the military. Before going into the Army, he received a master’s degree in economics, taught in college classrooms for a while and then chose to become a minister. After attending The Southern Baptist Theological Seminary in Louisville, Kentucky, he spent time planting new churches, but he knew there was more to his path. While he was awaiting direction, his friend said, “Why don’t you join the Army as a chaplain?”

Initially, Douthitt wasn’t interested. He was pretty sure that he’d passed the age limit, but he checked into it, just in case. Stoney discovered that the age requirements had recently changed from 40 to 42. So, at age 41 and after losing 60 pounds to meet the weight requirement, Stoney went in for his physical test. “By the time I was done with that physical, I was convinced that that’s what God wanted me to do for the next season of my life,” he says.

Douthitt trained as a soldier, but never carried a weapon. He was paired with a religious affairs specialist, an enlisted soldier, who was there to protect him while in the field and assisted with chaplaincy items during downtime.

When new soldiers joined the squad, they would ask, “Hey, where’s the chapel?” and one of the troops would point to Douthitt and say, “He’s over there!” While he is an ordained Baptist minister, Army chaplains are called upon to serve all enlisted soldiers. The Army hires one chaplain for each battalion, so the chaplain could identify as Catholic, Buddhist, Protestant, Muslim, Jewish or Hindu. Therefore, he felt right at home in Hendricks Chapel, the spiritual heart of Syracuse University known as a home for all faiths and a place for all people.

As a protestant chaplain in the Army, Douthitt was authorized to perform a wide range of religious services, but his main role was to ensure that the soldiers could exercise their right to worship or to choose not to worship at all. When soldiers sought a worship service outside of Douthitt’s Protestant tradition, he ensured that the respective religious representative could visit the troops. 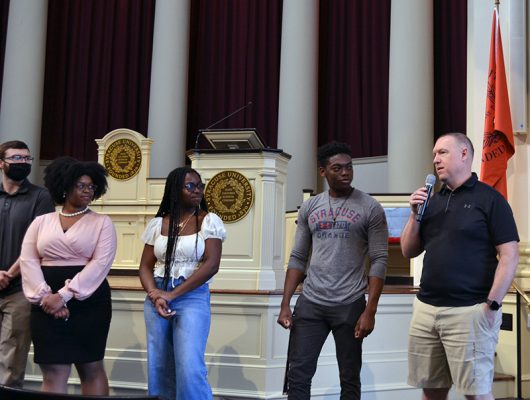 Douthitt speaks during a service at Hendricks Chapel.

Other times, the soldiers joined whatever service was offered without compromising their religious tenets. “It’s better to do it together than to not do anything at all,” Douthitt says. “Everybody in my unit knows that I’m Protestant, but that really doesn’t matter because I’m there, as we say, ‘To bring God to soldiers and soldiers to God.’”

There are approximately 3,000 Army chaplains, of all faiths, at any one time. After serving for eight years, some Army chaplains choose to become hospital chaplains, congregational preachers, counselors, professors—and sometimes defense comptrollers. Very few are chosen to become defense comptrollers. Each year, just one or two Army chaplains are sent to the Defense Comptrollership Program (DCP), a cooperative endeavor between Syracuse University and the U.S. Department of Defense, to achieve dual degrees: a master of business administration (MBA) through the Martin J. Whitman School of Management and an executive master of public administration (E.M.P.A.) through the Maxwell School of Citizenship and Public Affairs.

Syracuse University is the only institution in the U.S. that offers this program. From his background in economics, Douthitt’s new role fits perfectly. “I’ll function as the liaison between Congress and our Army branches to make sure the chaplaincy money is spent correctly,” he says. “I’ll make sure that every dollar allocated from Congress will go straight to Army ministries.”

Douthitt enjoyed his time at Syracuse, finding the Maxwell School to be very complementary to his pastoral work. “At Maxwell, I learned so much about communication styles and I became introspective about my own communication styles and motivations,” he says. His new knowledge of interest-based negotiation and arbitration, paired with the heart strengths of a chaplain, will serve his work in both the office and as a pastor.

“A lot of what I do is walk into a room with people at different ranks and different jobs, and they all have a stake in the game,” Douthitt says. “They each want to steer the meeting and I’m there to help everyone thrive; sometimes it feels like that’s not possible. Like if one person thrives, he believes the other person must fail, you know? I feel like I’m in the middle all the time. I have gained so many tools from the Maxwell School to help me thrive so that I can help others thrive too.”

Soon, Douthitt will graduate from Syracuse and begin his new position in San Antonio, Texas, where his wife and family will join him from Kentucky. He’ll be missed by many students and the University’s other Baptist chaplains, like Devon Bartholomew, who says, “Stoney has been a true blessing to Syracuse University and the Baptist Chaplaincy. He has served in many ways, from preaching at Campus Church to cheering on our students and staff. Stoney is a true friend who fully understands what it means to walk alongside others and to be a blessing in midst of the highs and lows of life.”

If you’d like to keep in touch with Douthitt, you can reach him at joseph.s.douthitt.mil@army.mil. For more information about Hendricks Chapel’s chaplaincies and religious communities, visit chapel.syracuse.edu.