The category? “Jeopardy!” champions with ties to Syracuse University.

Here’s your clue: You have 30 seconds.

Growing up, this Onondaga Community College philosophy professor loved watching “Jeopardy!” with his grandmother, Josephine. After earning his doctoral degree in philosophy from Syracuse University in 2013, a dream 20 years in the making was finally realized when he competed on the popular game show, dethroning a reigning champion before suffering a tough-luck loss in his second game.

Though his one-day winnings were less than they could have been, this contestant made plenty of memories, made his late grandmother proud and put his doctoral degree in epistemology—the theories of knowledge—to good use before a prime-time television audience.

The answer, in the form of a question: Who is David Bzdak G’13?

Bzdak became a “Jeopardy!” champion on June 30, correctly answering 18 clues, including the final clue of Double Jeopardy to take the lead into Final Jeopardy with $15,000. While none of the three contestants correctly answered, Bzdak hung on to defeat defending champion Halley Ryherd, thanks to smart wagering that left him with $2,000, the most of any of the contestants. 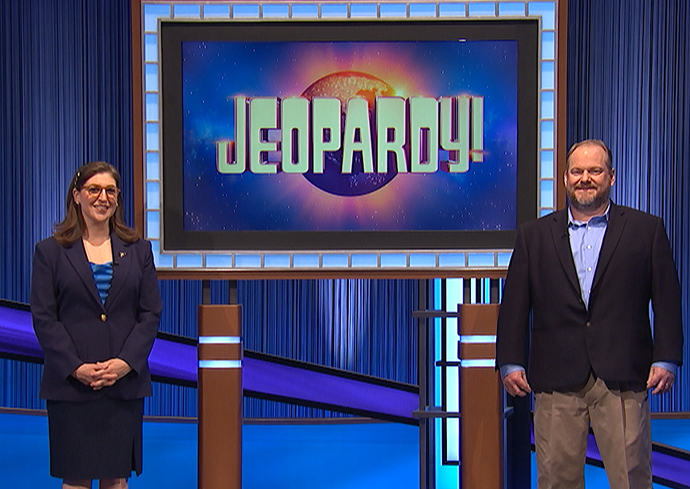 “It was such a surreal experience. My main goal was to not finish in the red, to have a positive score so I could compete in Final Jeopardy. Just to win a game was more than I expected and to play two games was great. Going in, my fear was I was going to forget everything, and while there were a few times I thought I knew the answer but wasn’t sure and was hesitant to buzz in, there were no clues where I should have known the answer and didn’t. There were even a few answers that came to me where I was like, ‘How did I come up with that?,’” says Bzdak, who occasionally teaches at Syracuse University.

Especially his late grandmother, Josephine, who died in 2005.

“I thought about her a lot, from when I got the call to when I was on the show. We called her ‘babcia,’ which is Polish for grandmother, and everyone kept saying how ‘babcia’ would be so proud watching me from heaven,” Bzdak says. 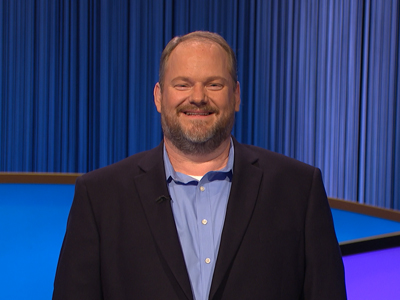 David Bzdak G’13 was victorious on the June 30 episode of the popular game show “Jeopardy!”

Bzdak, who first tried out for the popular game show at Turning Stone Resort Casino in 2001, estimates he took the tryout test 10 times before earning a spot on the show. He was encouraged to keep trying by both his family and one of his former students, Ashley O’Mara G’21, who appeared on “Jeopardy!” in 2018.

After a successful online test in April of 2021, it took another four months for Bzdak to advance into the contestant pool, but that didn’t guarantee him a spot on the show.

As the new year approached, Bzdak says he gave up on being selected for “Jeopardy!” To his surprise, in early April Bzdak received the call: he would make his long-anticipated appearance on the game show later that month.

Bzdak was sworn to secrecy and couldn’t share the news with anyone, not even his wife, Farhana Syed G’11.

Since he had given up on being selected, Bzdak felt out of practice with his trivia knowledge. He quickly went to work, using online trivia sites and flash cards to cram for three weeks before flying out to Sony in Culver City, California.

“There’s tons of online resources. You can watch every game in the history of the show, and you can hear from people who have been on before. There are people who compile the most frequently occurring categories. I knew what I had to work on. Every game it seems geography comes up, along with some science, history and English literature,” Bzdak says.

Prepared for a Career as an Educator

Speaking of geography, Bzdak and Syed, a native of India, met at Syracuse University. When Bzdak was named a Fulbright Scholar for 2016-17, the couple and their three children relocated to India for a year, where Bzdak taught several courses in philosophy.

It was a once-in-a-lifetime experience for Bzdak, who credits his time at Syracuse University with preparing him for the challenges of both earning a Ph.D. and teaching philosophy.

“Syracuse University was very good to me. The students in the program were great and I had great professors. The faculty at Syracuse emphasized not only scholarship but also teaching. You hear a lot of graduate students who end up with very little teaching experience or teaching instruction, but at Syracuse, we got to teach our own class under the observations of a faculty advisor. Those experiences prepared me for my teaching career. I’m proud to be a graduate of Syracuse,” Bzdak says.