The D’Aniello Institute for Veteran and Military Families (IVMF) had the unique opportunity to gain two United States Air Force Academy (USAFA) cadets to assist in programs and research. Cadets Kamryn Olkowski and Mayra Quintana joined the IVMF through the USAFA Cadet Summer Research Program (CSRP). The CSRP is a highly selective program where the most academically accomplished USAFA cadets participate in an academic research experience via various partners across the country. Through this one-month experience in June, cadet Olkowski provided valuable insight to the entrepreneurship team and cadet Quintana helped the research team with a project serving student veterans. 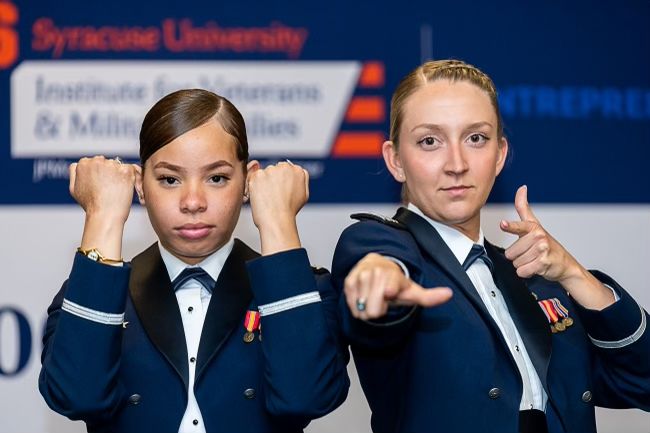 Mayra Quintana (left) and Kamryn Olkowski interned for one month at the D’Aniello Institute for Veterans and Military Families.

Kamryn Olkowski hails from Colorado Springs, Colorado, where prior to attending the USAFA she served as a signal intelligence analyst for the U.S. Air Force. She always knew she wanted to go to the academy growing up because she attended local sports camps and programs there. When she applied the first time, however, she was denied. With a no-quit attitude, Olkowski applied twice while serving active duty and was finally accepted to attend the USAFA. As a rising senior, Olkowski is a management major, which covers topics such as accounting, finances and marketing.

Mayra Quintana was born in Fort Lauderdale, Florida, where a tough family life molded her into the person she is today. “My dad was arrested when I was 8 years old, and he’s been in prison for most of my childhood,” says Quintana. Her community is heavily impoverished and deals with constant violence and drugs. Quintana had her eyes set on college, and during junior ROTC in high school, she decided to apply to the USAFA and become a beacon of hope for others. Similarly, to Olkowski, Quintana is a rising senior also majoring in management and uses her experiences to speak with members of her community about the ways she has avoided becoming a statistic in her community.

Both cadets, as part of CSRP, gained insight on opportunities available to them in the workforce. Olkowski says, “When looking at what the IVMF was and the focus on entrepreneurship, as an aspiring entrepreneur I knew that it could provide me with some insight and maybe something that I could use in the future.” While cadet Quintana says she initially found out about VET-SIM (a project focused on helping student veterans navigate collegiate study), she thought this would give her the experience and opportunity to help others, specifically veterans, through research.

Quintana is looking forward to taking what she has learned under Linda R. Euto, associate director for research and evaluation at the IVMF, and Professor Benjamin Dotger, from the School of Education, and the project and implementing it at the academy. Quintana says, “Within each squadron [100 cadets] at the academy, there is an officer and enlisted member in charge of those cadets. Applying what VET-SIM is trying to accomplish can potentially close the gap between officers, who have much more training through the academy, and their enlisted peers who are working with students.”

Within entrepreneurship, Olkowski has been working on the community navigator pilot program (CNPP), which was awarded to the IVMF through a Small Business Administration grant. The CNPP program includes seven hub organizations, in this case one of them being the IVMF, at the center of a network of spoke organizations that engage trusted community advocates to support veteran small businesses. Olkowski says, “I have been analyzing what our hub at the IVMF does to coordinate with our 16 spokes. I am then comparing that to the other seven hubs and taking the best parts of what they are doing and coordinating with IVMF staff to implement them [the best parts] into our hub.” Through her analysis Olkowski has also been part of restructuring the community navigator website design, as well as creating a document explaining the project.

While the cadets spent most of their time working in their respective groups, they did have the opportunity to attend the Veteran Entrepreneur Success Summit in Washington, D.C., featuring members of the Vet100. They were able to make new connections with successful veteran business owners and learn about other segments of IVMF programming. Reflecting on the experience Quintana says, “Everyone was super genuine and supportive and giving us so much wisdom and knowledge. It was cool to be there and see successful people encouraging us to start our businesses and careers earlier than later.” Olkowski says, “We were nervous about it, we did not want to annoy all the people from their actual networking opportunities. But everyone was genuine about wanting to connect with us and talk with us.”

As both cadets enter their final years at the academy, they thought about what life might be like for them after they fulfill their military service. Olkowski says her hope is to one day open a consulting business for people who are dealing with death and navigating that process. She hopes that she can bridge the gap for folks struggling to balance the administrative nature of the task of dealing with death and the personal emotion that accompanies the process. Quintana is looking back on her community, and what it means to be a female minority in the military. She hopes that others will see what she has done and be inspired to follow in her footsteps making positive change in her community and others across the country.

Quintana and Olkowski shared their appreciation of the IVMF and what they learned in a short amount of time. Olkowski says, “After seeing the number of resources offered at the IVMF I am going share what I have learned with others facing the transition process. It is nice to have this resource in my back pocket for when I transition out as well.” Both women are excited to get back to the academy and share their experiences from the IVMF with other cadets.

Since 2017, Syracuse University has had the privilege of partnering with the Pat Tillman Foundation (PTF) as one of 16 university partners. This year, Anthony Ornelaz, a student in the master of fine arts program in the College of Arts…