Father Gerry Waterman is a man of devout faith.

Serving as Syracuse University’s Catholic chaplain since 2016, Father Gerry, as he is affectionately known on campus, has been making a difference in the lives of students, bringing people together for sermons, service and community. 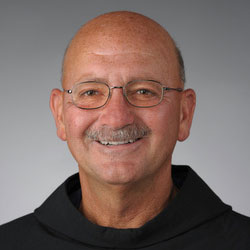 An outgoing people person, Father Gerry is proud to share his faith and his love of service with the campus community. But Father Gerry has a secret: before even setting foot on the University campus, he wanted nothing to do with relocating to Central New York.

That was until Father Gerry embarked on a fateful morning jog through downtown Syracuse. It was on this three-mile run that Father Gerry, a deeply religious man, received a sign from God that persuaded him that he was meant to come to Syracuse University.

Father Gerry sat down with us to discuss how the Catholic Center provided a sense of community during the COVID-19 pandemic, how he’s inspired by the Syracuse University and SUNY College of Environmental Science and Forestry (SUNY ESF) students, why he was beyond humbled to receive the Chancellor’s Forever Orange Award and relives his days as a commercial winemaker.

Here is the full conversation with Father Gerry on the ’Cuse Conversations podcast. A transcript [PDF] is also available.