This year’s Victory Parade is the first in Syracuse since Juneteenth became an acknowledged New York State holiday in 2020 and a federal holiday in 2021. 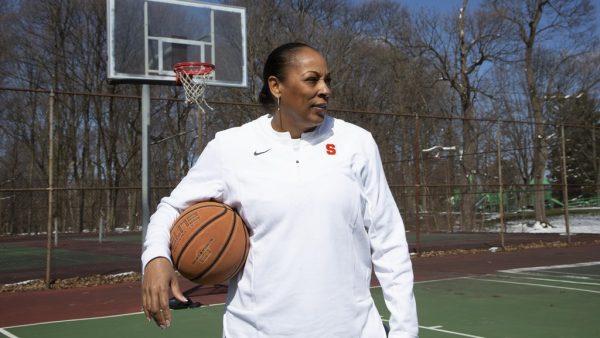 Legette-Jack, a Syracuse native, will be riding at the front of the parade route, and she will be sporting her customary Syracuse University gear. Legette-Jack and Syracuse Common Councilwoman Rasheada Caldwell will lead the parade procession as grand marshals. The parade departs at 11 a.m. Saturday from the Dunbar Center and will conclude in front of City Hall.

At the conclusion of the Victory Parade, Juneteenth festivities will take place at City Hall from noon until 10 p.m.

Before coming to Syracuse University,  Legette-Jack led Nottingham High School to a pair of New York State Championships. At Syracuse, Legette-Jack enjoyed a record-setting four-year career from 1984-89 that saw her set Orange women’s basketball records for career points scored, rebounds, and field goals and free throws attempted and made, and she earned dual degrees in child and family studies and psychology.

In November, her No. 33 jersey was raised to the rafters of the JMA Wireless Dome, the first female student-athlete to have her jersey retired in school history, and in March, Legette-Jack was introduced as the seventh head coach in program history.