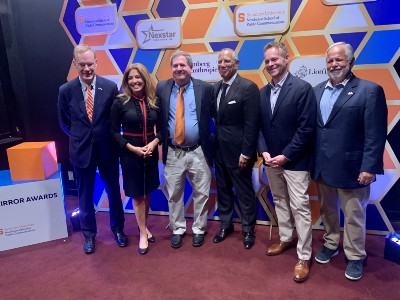 Chosen by a group of journalists and journalism educators, the winners are:

In addition to the juried journalism awards, the Newhouse School presented the Fred Dressler Leadership Award to Dean Baquet, executive editor of The New York Times. Managing editor Joseph Kahn, who will succeed Baquet as executive editor this month, presented the award. The 19th News was honored with the Lorraine Branham IDEA Award, which was presented by Sunny Hostin, three-time Emmy Award-winning co-host of ABC’s “The View,” and accepted by editor-at-large Errin Haines.

The ceremony was held at French Institute Alliance Française. Newhouse associate dean Joel Kaplan presided over the ceremony, filling in for Dean Mark J. Lodato, who had tested positive for COVID earlier in the week and was unable to attend. Newhouse alumni Contessa Brewer ’96 of CNBC and Ghael Fobes ’22 of NBC News served as co-hosts.

The Mirror Awards are the most important awards for recognizing excellence in media industry reporting. Established by the Newhouse School in 2006, the awards honor the reporters, editors and teams of writers who hold a mirror to their own industry for the public’s benefit. For information about the awards, visit newhouse.syr.edu/mirrorawards or email mirrorawards@syr.edu.

Carlton Daniel Jr. G’16 fell in love with filmmaking at an early age. Growing up in Ohio, he spent a lot of his childhood at the local movie theater, browsing for videos at Blockbuster and dissecting films with his family….