Harry E. Goetzmann Jr. ’59 was only 5 years old when he developed a work ethic that would last a lifetime. The Syracuse University graduate and longtime member of the Board of Trustees first demonstrated his entrepreneurial spirit as a substitute paperboy with the Buffalo Courier Express. It required that he wake up at 5 a.m. He was clearly motivated, as he went on to secure his own newspaper route at the age of nine. 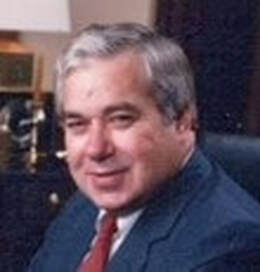 Goetzmann passed away on April 20, 2022, at the age of 84. “It was his determination to succeed that defined Harry’s life and service to Syracuse University,” says Board Chair Kathy Walters ’73. “As a student-athlete, he played one sport—lacrosse—and cheered on others as captain of the football and basketball cheerleading teams. He parlayed that enthusiasm for the Orange community into generosity with his time, treasure and talent, serving as a voting trustee from 1987 to 2003 and supporting a computer terminal room in the Schine Student Center, named for him and his wife Sylvia. We remain grateful for his generosity during his lifetime.”

While pursuing an undergraduate degree in business from the Whitman School of Management, Goetzmann was an Army ROTC cadet, graduating as a Distinguished Military Graduate and serving our country by flying helicopters as an officer in the U.S. Army.

Goetzmann began his professional career with IBM in Syracuse as a salesman and later as a sales manager. Just six years after joining IBM, he started his own company, Syracuse based Continental Information Systems (CIS), which bought, refurbished and leased IBM computers to businesses. CIS, which was launched out of Goetzmann’s home, eventually grew to 1,200 employees with offices in the United States, Germany, England, Switzerland and Japan. Eventually, CIS expanded its operations into leasing commercial aircraft, trains and ocean-going ships.

A serial entrepreneur, Goetzmann also helped launch Schomann Entertainment, an entertainment and communications company. He then founded and developed MegaCom Limited in 1993, the first cellular company in the Republic of Georgia. MegaCom provided the ability for Georgians to communicate on an international level.

In his free time, Goetzmann enjoyed relaxing with family and friends on Skaneateles Lake. He and his wife Sylvia, whom he met at Syracuse University, raised five children together in Skaneateles.  He is survived by Sylvia and their children, Craig ’85 (College of Arts and Sciences), Dan G’87 (Whitman School of Management), Eric, Harry and Darlene; fifteen grandchildren and one great-grandchild.