Share
College of Arts and SciencesCommunications Sciences and Disorders
Students walking into Grant Auditorium for CSD 450/650 Clinical Seminar last semester saw a celebrity instead of their usual professor. National Basketball Association (NBA) player Michael Kidd-Gilchrist was visiting the class to give the students a unique perspective on both their profession and on their future patients. His visit to Syracuse University, hosted by the Department of Communication Sciences and Disorders (CSD) in the College of Arts and Sciences, also included a tour of the department’s Gebbie Speech-Language-Hearing Clinic and Professor Victoria Tumanova’s stuttering research lab. 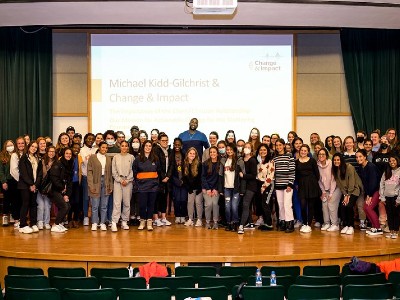 Michael Kidd-Gilchrist (center, back row) with students from the CSD 450/650 Clinical Seminar.

Although he is best known for his athletic abilities—he most recently played for the Dallas Mavericks—Kidd-Gilchrist was here on an educational mission. As a person who stutters, he wants the practitioners of tomorrow to understand the experiences and needs of those who stutter today.

Like many of us during the first year of the pandemic, Kidd-Gilchrist spent time thinking about his values and his life. While inside the NBA bubble in 2020, he decided to use his personal journey as a catalyst to help others. Kidd-Gilchrist then started his “Change & Impact” foundation as a means of sharing his unique perspective with the next generation of speech therapists and to also advocate for better insurance coverage for speech therapy for stuttering. Now, he regularly speaks at colleges and universities that offer speech-language pathology and audiology programs and also speaks at camps and conferences related to stuttering.

At a previous event at the University of Florida, Kidd-Gilchrist noted, “At first, I didn’t want anyone to know about my stutter. When I entered speech therapy, I told my therapist that I didn’t want anyone to know. Today, I want to share my story and see my stutter as a gift that I have embraced because now I can help others, including those who are getting into the field of speech-language pathology.”

Indeed, Meaghan Doyle ’23, a CSD and neuroscience major, gained a different and helpful perspective on stuttering from his talk in Syracuse. “Everyone has their ‘something,’ with [Michael’s] ‘something’ being stuttering,” Doyle says. “I liked how he said that it doesn’t define you.”

Erica Bliss, a senior dual major in CSD and psychology, emphasized the importance of Kidd-Gilchrist’s advocacy as an important part of stuttering treatment. Clients who stutter do not always have the access and support they need to succeed. “We need to help grow [these services],” she says. Bliss plans to apply this perspective throughout her career to help her future clients adequately reach their goals.

Like the many other CSD students in attendance, Brittnee Jean ’23 appreciated Kidd-Gilchrist’s vulnerability when talking about his experience with stuttering. She hopes to be able to achieve a similar relationship with her future clients. “My favorite part was when Michael said he felt like [his speech-language pathologist] wasn’t trying to change [him],” says Jean. 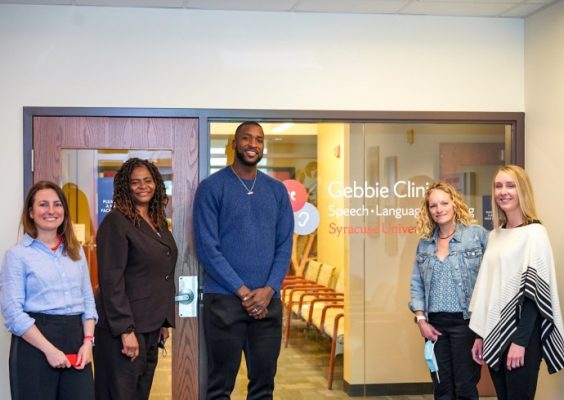 Kidd-Gilchrist visited the Gebbie Speech-Language-Hearing Clinic for a tour.

At the same time, Kidd-Gilchrist acknowledged that stuttering presents significant challenges for those affected by it, and it was important to him that people who stutter have access to speech therapy. He also spoke about the importance of the clinician-client relationship to the success of the therapy process.

“Being able to truly listen and have empathy for your client is instrumental in building a good therapeutic relationship,” says Victoria Tumanova, associate professor of communication sciences and disorders, who arranged Kidd-Gilchrist’s visit. “Michael spoke movingly about his personal experience in speech therapy and what made it a success. A strong bond with his speech therapist helped him go from avoiding talking to speaking up. Hearing that has inspired and motivated our students to go out and do the same with their future clients.”

A future practitioner agreed. Thanks to Kidd-Gilchrist’s courage in sharing his story, CSD major Chloe Crowley notes, “As speech-language pathologists, we [will] have the power to change someone’s life for the better.” Working together, the client and the therapist can be the best kind of dream team.

Students Experience the History and Culture of the Land Down Under

An immersive trip to study the history and culture of Australia, along with enjoying a game of footy and a tasty meat pie too, is underway for a group of Syracuse Abroad students who are spending time this month in…

It’s no secret that sleep and emergency medical services (EMS) work do not go hand in hand. The profession is notorious for long and oftentimes odd hours, with overnight shift work a part of the job. It’s bound to affect…

What does wellness mean to you? Are you into fitness challenges, weight management or exploring new recipes? Maybe mental health, resilience or stress management are more appealing to you? Do you like one-time programs or ongoing series? Is it easier…

Jennifer Cornish Genovese is a professor of social work in the Falk College, a New York State licensed certified social worker and has worked in private practice as a psychotherapist for 30 years. She specializes in helping children deal with…