Josh Eimbinder ’22 struggled during his sophomore year at Syracuse. The sport management major wasn’t earning the grades he needed. “In high school, they didn’t teach me how to study—they just hand you the work. I went to my advisor to brainstorm ways to get back on track and boost my grade point average.” Then, he saw a poster for the Center for Learning and Student Success (CLASS) in his residence hall, and decided to learn more.

Eimbinder took advantage of academic coaching with CLASS and went from, “I actually might be in trouble here,” to becoming an academic coach himself, thanks to the skills he learned. “My coach, who now works in cybersecurity at a well-known company, was my role model. I made a connection with him and learned such skills as memorization techniques that I used to master the detailed information about sports commissions, rules and collective bargaining agreements that I needed to learn.” 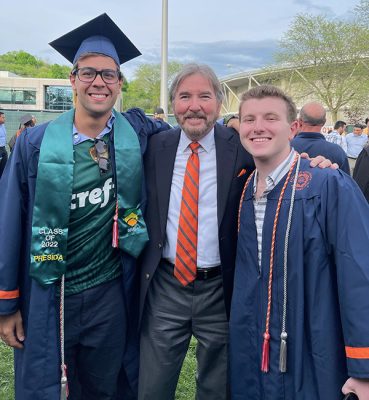 Eimbinder found coaching so helpful that he wanted to get involved. He reached out to the CLASS leadership team. At the time he didn’t have the required GPA, but he was so persuasive that he was provisionally hired and trained as an academic coach—on the condition that he keep his GPA over 3.0.

That’s when his fellow women’s basketball team manager and sport management major, Joao Paulo Forman Murray ’22, got interested. The native of Sao Paolo, Brazil, was looking for different things to do on campus and had helped Eimbinder study math. Forman Murray came on board because, “I saw how Josh really evolved academically in the program.”

Both friends say they believe what they have learned as coaches will benefit them in their careers. “I think communicating with multiple audiences and diverse people with different backgrounds, interests, opinions and behaviors is the key to any job,” says Forman Murray. He primarily served as a coach for science and engineering students, which isn’t a field he knows well. Over the course of his time as an academic coach, he found ways to connect with students, encourage them to keep an open mind and learn to ask good questions that uncover the information they need.

“As someone going through coaching, I really learned time management, prioritization and how to hold myself accountable, in addition to the specific study and review techniques,” Eimbinder says. “As a coach, I learned how to connect with all kinds of people, meet them where they are and celebrate their successes. It’s super exciting as a coach to hear from your past students that they’re succeeding.”

Forman Murray is looking forward to taking his leadership skills into his summer capstone project and is hoping to find a job in the United States after he finishes. Eimbinder believes that his experience as a coach will benefit him in his post-graduate work at United Talent Agency. “In a job, you work with vague instructions.  In school, every professor isn’t clear and concise.  If you can understand how to ask questions and interpret vague instructions and run with them, it becomes super valuable down the road.”