‘You Have the Power to Have a Profound Impact’: ABC News’ David Muir Addresses Syracuse University’s Class of 2022 (Video)

As the Syracuse University community came together to celebrate the Class of 2022, it was only fitting that a Central New York native who has reported on some of the most powerful and consequential stories of our time came home to deliver a Commencement address honoring a graduating class that has gone through more trials and tribulations than any in the University’s 152-year history.

David Muir, one of the most highly respected journalists in the country, has covered the issues that challenged us over the last four years: the COVID-19 pandemic; a national reckoning around race and social justice; a rise in hate crimes against some of the most marginalized communities; the war in Ukraine, and more.

Echoing what would be the two major themes of the day, Muir both lauded the resolve and determination of the nearly 6,500 students who had their degrees conferred inside the stadium—“you soldiered through, you kept all the noise at bay and you kept going”—and issued yet another challenge to the resolute Class of 2022.

“We’re all counting on you. In this moment we have never been in greater need of a generation of thinkers, of doers, of change-makers than we are right now. … Young people who care about themselves but also about their neighbors, their communities, the world. … There’s simply too much at stake for us not to care. Every single one of you here today has the power to have a profound impact on the world around us,” Muir said. 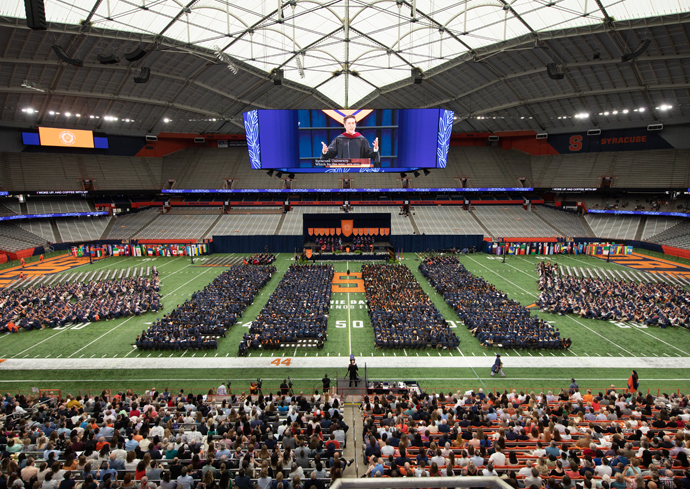 Members of the Class of 2022 listen to the Commencement address from “ABC World News Tonight” anchor David Muir.

A Syracuse native, Muir delivers national and international news to millions of people each night as the anchor of “ABC World News Tonight with David Muir,” and is also co-anchor of ABC’s “20/20.”

It’s a path Muir has been on since he was 14 years old, when, as “the only kid in the neighborhood watching the evening news,” he began writing letters to the reporters and news anchors in town. That determination opened doors for Muir, who soon became a familiar face in Syracuse newsrooms.

Once he walked through that door, “I never left. Summer breaks, school vacations, I’d be in the back of the news cruisers wherever they would take me. The snowstorms, Syracuse City Hall, the Great New York State Fair, I remember it all. Every story, every moment, they were such defining moments, they are etched in my mind,” Muir said.

As a teenager, Muir admired the broadcasting style of “ABC World News Tonight” anchor Peter Jennings, and he would one day go on to hold down the same network anchor seat as Jennings as the voice and face of ABC’s network news coverage.

Commencement is a time to celebrate, but it’s also a time of great uncertainty. While Muir admitted it’s easy to become overwhelmed pondering that next chapter, he offered some advice to help these Orange graduates find their own door. 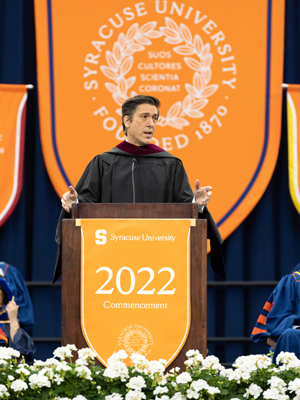 “You have a gift within you already. You just have to discover it. I’m here to encourage you to find that dream and then to chase it. … Think about something you’re passionate about, that excites you, fuels you, challenges you, and then just follow the path. Don’t worry about the fear. You should never worry about the fear. You should worry if there is no fear because fear is proof that you’re still testing yourself, you’re still learning,” Muir said.

Marveling at the “extraordinary achievement” and the resiliency displayed by the Class of 2022 in earning their degrees, Syracuse University Chancellor and President Kent Syverud credited the hard work, determination and dedication of the graduates while setting the bar high for their successes once they leave campus.

“You have done wondrous things here. You will do marvelous things in the future. Please aim high. And always, go Orange,” Chancellor Syverud said.

Baratta’s story drew a standing ovation from the stadium crowd, as her degree marked the completion of a journey started 20 years ago. Baratta, a U.S. Army veteran, pursued her degree while working full-time as one of the first Black female police officers in the Syracuse Police Department.

“In so many college towns in this country, things fell apart. It was not possible to continue in-person instruction and activities. But that did not happen in Syracuse. In this place, our community came together in support of this University, and this University came together in support of this community. Our people, our institutions, our colleges, Upstate Medical University, our hospitals, our county and city governments, our neighbors—all of us pulled together and helped this University so that you could have a university experience this last two years,” Syverud said.

“Anyone who has ever stepped on this Syracuse University campus knows that in this community, we get through these times together,” Muir echoed in agreement.

Blazing your path. Pursuing your dreams. Making your world a better place. Finding your door. Valuable advice to the Class of 2022 from a Central New York native who set out to make his mark on this world from an early age.