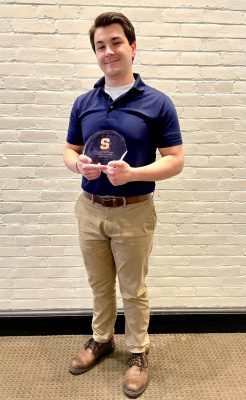 Ruscitto received the Undergraduate Student Employee of the Year Award for his work with the D’Aniello Institute for Veterans and Military Families.

Q: How was your experience getting to Syracuse University?

A: I’m a Syracuse native, and enlisted in the Marine Corps in 2013, out of high school. After five years of military service, I saw a crossroads. At 23 I realized if I don’t pursue this opportunity to go to college here now, then I’m going to miss it.

As a kid, I never would have considered coming to Syracuse University. When I got out of the Marine Corps, I thought it was too big. I thought I wasn’t smart enough or capable enough. Fortunately, I had people who were encouraging, and helped me see coming here as a different kind of challenge. In a year, these people have convinced me that yes, I can. They’re making me believe I can do this. I can be part of this team.

Q: What made you want to join the Marine Corps?

A: My uncle retired from the Marine Corps, and he’s always been my hero. Also, I know it sounds like a cliché, but I wanted to do something for the greater good. I believe the only good reason to join the Marine Corps is the privilege of calling yourself a United States Marine. It doesn’t need to make itself more desirable.

A: It’s not fun, and it’s not super easy, but I got to do and see a lot. In just over five years, I went to more than 10 countries. I did humanitarian relief, deployed twice in the South Pacific, and worked as a helicopter crew chief, flight instructor, tactics instructor and lead flight instructor. Everything I got to do after earning the title Marine was a bonus.

Q: How was it transitioning from the military to student life here?

A: It was scary, and a bit of an identity crisis at first. You go from being a very important part of a machine where you have a specific role to something very different. People don’t always have the best experience when they leave the military. Syracuse doesn’t force you to carry that with you. From the moment you step on campus, they’re trying to help you figure out how to leave the uniform behind and get in front of your next mission. As much as they respect what veterans have done, I also appreciate they don’t expect us to put on some kind of show. It’s helped me figure out who Sgt. Ruscitto is and who Anthony Ruscitto is going to be.

A common theme I see among those who struggle with this transition is not getting invested in campus. At first, I lived 30 minutes away. I barely had time to meet friends and missed that sense of community that’s so important for veterans. Every single time Dr. Haynie speaks at our new veteran orientation, his challenge is: Be a college student. It’s a really good point, and when I first heard him, I don’t think I understood it yet. I tried as much as I could. He poses that challenge to each of us, and that advice encouraged me to get out there and be as active as I can. Syracuse offers so many things that allow veterans to still make a difference and be a part of something.

Q: What are some ways you stay engaged here?

A: I’m the vice president of the student veteran organization on campus. As an advocacy group, we’re always trying to look for opportunities to get a veteran out into the world besides getting up, going to school and going home. We host socials and engage speakers who deal with something veterans-related, and there are so many here. For example, we brought in a Veterans Affairs rep to talk about vocational rehab and G.I. Bill benefits. We had somebody from the law clinic talk about the rights of veterans specifically with the law, and a speaker from the health clinic talk about resources unique to the veteran experience here.

I’m also really involved in Syracuse University Ambulance (SUA), an all-student organization. I never had medical experience in the Marine Corps, but this was the perfect opportunity for me get back into uniform. It’s a little stressful, and it’s great to give people a little peace and comfort on what’s most likely the worst day of their life.

Another thing I really enjoy is being a student worker at the D’Aniello Institute for Veterans and Military Families (IVMF). As an intern, I support entrepreneurship programs including Boots to Business, Veteran EDGE and V-WISE. It’s given me insight into some of the challenges that most veterans face. You can see that people who work at IVMF understand the primary mission of “what we can do for veterans?” Everything is about, “How would this be good for veterans and their families?”

Q: What other resources have you found here for military-connected students?

A: Since I’ve been in Syracuse, the resources that are available to us as student veterans, as far as I can tell, are unique compared to my peers. Other campuses have maybe an office for veterans. We have networking opportunities, service opportunities, career counseling, mental health support and more. I’m fortunate I’ve done ery well in my studies here, but there were resources in place that helped me get there, like the Office of Veteran Success. This is the place to start new.

Q: What do you want other students to know?

A: I would challenge all veterans and non-veterans to make one connection with somebody who has nothing to do with you. Student veterans don’t have to feel like those old people with tattoos and beards in the back of the classroom. Non-veteran students want to learn more about veterans and our experiences.

Also, I really want to encourage other student vets to find out what your next mission is. That’s one of the scariest things about the transition. It’s not that no one cares. It’s that there’s nothing big on the horizon unless you put it out there. It can be small things at first, then it can be bigger things. Syracuse is a place where you can do all of that.