The Student Veterans Organization (SVO) and the Office of Veteran and Military Affairs (OVMA) have presented two awards to student veterans in honor of their significant and notable achievements. The awards were distributed at SVO’s social held at the Inn Complete on South Campus on May 6.

Student Veteran of the Year 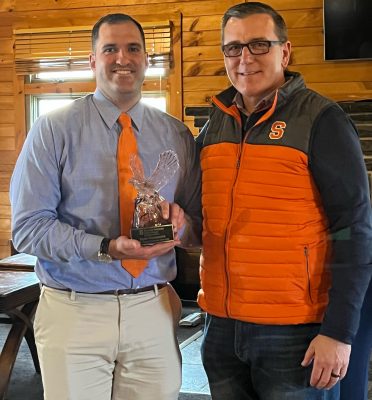 OVMA takes pride in student-veteran involvement on campus, in the community, and at various events on and off campus. Each year, OVMA Student Veteran of the Year is presented to a student who has gone above and beyond, with contributions on and off campus, to make Syracuse University “the best place for veterans.” This year’s recipient, Ryan Marquette L’22, a U.S. Army veteran and active member of the Army National Guard, set a new precedent of success for a student veteran.

Marquette was a student veteran in the College of Law while simultaneously pursuing a master of public administration in the Maxwell School of Citizenship and Public Affairs. While both those efforts were time-consuming, Marquette took time to encourage each of his fellow veteran classmates to involve themselves with veteran functions on campus and in the community. Through those efforts, Marquette volunteered for the D’Aniello Institute for Veterans and Military Families, which incorporated him as a guest speaker at a Fort Drum Onward the Opportunity graduation.

During the height of COVID-19 in 2020, Marquette had to juggle school and his active role as a member of the National Guard as he responded to the pandemic in New York State. His efforts led to the distribution of 147,809 COVID tests, 36,661 meals, and 507 medical supply deliveries across the state. Off campus, he leads the Leader-Scholar Scholarship in Rome, New York, where one student is awarded a scholarship for their leadership efforts throughout their high school career and volunteer work in their community. The scholarship was named after Marquette’s friend, Capt. John Levulis, who lost his life in a military training accident.

Marquette served as the president of the Operation Veteran Advocacy group at the College of Law, and was an executive board member of the Syracuse Law Review. His list of accomplishments while at the University includes receiving the 2021 Student Veterans Organization’s Best for Vets award and was the first-ever law school appointee of the 2021-22 Syracuse University Board of Trustees, amongst other contributions to the community. OVMA congratulates Ryan on adding one more accomplishment to his extensive list as this year’s Student Veteran of the Year. 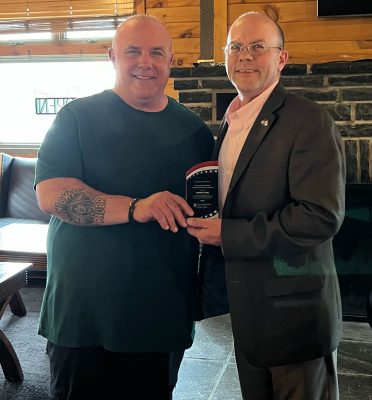 The Danny Facto Student Veteran Work-Study Award, named after Danny Facto, the University’s first Veterans Affairs (VA) work-study participant, recognizes a student veteran VA work-study who reflects the values that Danny did during his time on the hill. Danny was an excellent ambassador of his fellow student veterans and through an unwavering commitment made tremendous impacts on those who surrounded him during his life. This year’s recipient, David Ladd ‘23, exemplifies the values set forth by Danny. As described by his nominator, David has the passion, commitment and ability to get things done. Those qualities are the very same used to describe Danny.

During his work-study with Veteran Career Services (VCS), Ladd has made a noticeable contribution to OVMA Connect, a mentoring application connecting student veterans with student veterans, alumni, faculty and staff, and partners of Syracuse University. His efforts have increased engagement on the platform and increased the number of users by nearly 250%. Ladd has also made remarkable contributions to VMock, a resume evaluation platform recently launched at the University for student veterans. As the VCS VA Work-Study, Ladd’s contributions paved a way towards improving experiences for student veterans and military-connected students at the University. In addition to Ladd’s efforts to improve technologies for student veterans seeking career services, he has also provided OVMA leadership with reports that help measure the impact of VCS’s efforts. David has fully embodied this award and, through carving his path, has made an everlasting impact.