Si Yun (Sara) Lim absolutely knew she wanted to study international relations at Syracuse University, even if she didn’t know where she’d be heading at first.

“I got my acceptance letter, and my mom asked me where Syracuse was. I had no idea,” Lim says. “I thought I was going to New York City.” 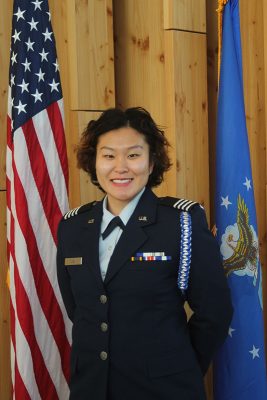 That might be the only part of Lim’s story that has seemingly taken her off track. She emigrated from South Korea when she was 5 years old, settling with her family in Suwanee, Georgia. Though her father served in the Korean military years before she was born, she found her drive to join Air Force Reserve Officers’ Training Corps (ROTC) through experiences with other military-connected people growing up.

Lim says she always had somebody nearby who was a veteran or whose parents had served. When a neighbor’s experience inspired her to look toward a future career with the FBI or CIA, she learned they prefer a military background and fixed her path toward the military.

“I wanted to be different and do something nobody else in my family was doing, live the exciting life and join an organization where they send me to travel somewhere, but for the country,” she says. “I always looked at the military as one big opportunity.”

Lim’s high school had an Air Force Junior ROTC program, which she joined and cemented her affinity for the Air Force. When it came time for her to consider colleges, she knew she didn’t want to go to the same universities where others in her graduating class would head. Her parents also nurtured her desire to explore different options.

“Though their way of teaching changed as I got older, and they got a little less strict, I’ve always been encouraged to do something I love and I enjoy,” she says. “America is the place of opportunities, and I looked at college and Air Force ROTC as an opportunity to leave Georgia and make connections.”

Lim found all those opportunities at Syracuse University. She set out to study international relations at a top-rated university and serve as an Air Force ROTC cadet. This month she will graduate with a double major in international relations and political science with a region concentration in the Middle East and North Africa and a topic concentration in intercultural communications.

She’s also been selected to be an air battle manager (13B) in the Air Force, the military’s offensive team that coordinates with pilots during their missions. Lim will attend training at Tyndall Air Force Base in Florida for her first six months of active duty.

“I never toured Syracuse, never came to visit, and I knew day one of ROTC that this is where I’m supposed to be,” she says. “The group was very welcoming, which was very affirmational. I knew the minute I set foot here that I made the right decision.”

Lim has found opportunities to start her military adventures early, including a professional development training called Ops Air Force Base the summer between her freshman and sophomore year. She spent two weeks at an Air Force Base in South Carolina with several other cadets from around the country to learn about the different career fields and how operations work. A few years later, she would see some of the same cadets again during her field training exercises, which helped reaffirm the familial feeling she appreciated in her Air Force ROTC experience. 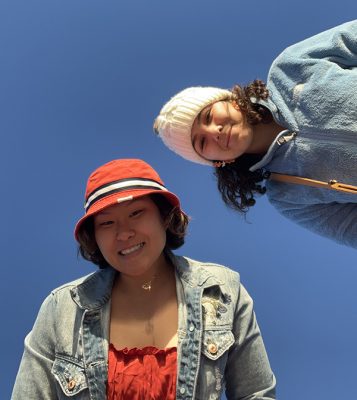 Lim also participated in Project GO, which stands for “global officer,” a competitive language immersion program available for all ROTC cadets, which afforded the opportunity to visit Korea for two months. As a native speaker of Korean, Lim welcomed the unique opportunity to study at Yonsei University in South Korea, one of the top three private universities in the country, alongside other universities with language programs there, in partnership with Georgia Tech. It was a unique opportunity to marry some of her foundational experiences in the same place. Coincidentally, one of the professors from the Georgia Tech program used to be Lim’s bible study teacher in elementary school.

Though some of her biggest challenges have come with trying to balance ROTC duties with the demands of her academics, navigating COVID during the process was an extra hurdle. For a while, all her classes were online, and her only in-person interactions were with fellow ROTC students. In addition to finding balance, she learned to navigate interpersonal relationships and how to be professional in a natural hierarchy.

Still, Lim knows she arrived at exactly the right place. She’s met students from other schools and knows she’s lucky to enjoy the tight-knit, caring nature of her fellow cadets at Syracuse. She’s proud to know that one of the things alumna and fellow Air Force ROTC Detachment 535 graduate Colonel Eileen Collins ’78, H’01, USAF (retired) mentioned in her book was being able to connect when she visited the Air Force ROTC detachment at Syracuse University.

“Obviously, it started out with the best people, because a strong culture of caring and being able to connect was embedded into our program years before we came,” she says. “We care for each other a lot more than you would expect.”