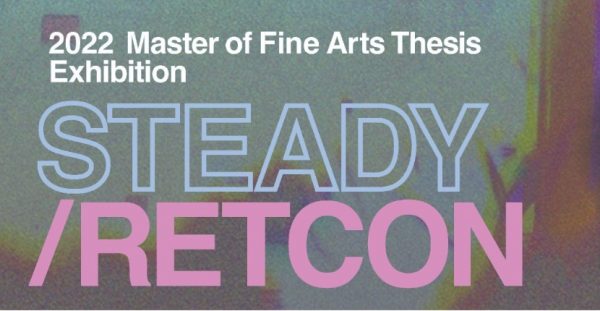 Master of fine arts (M.F.A.) candidates in the College of Visual and Performing Arts (VPA) are presenting the thesis exhibition “Steady/Retcon” over two weekends in May at the Syracuse University Governors Island House, 407A Colonels Row, Governors Island, New York City.

Curated by Laura Dvorkin ’06, “Steady/Retcon” features the work of 18 M.F.A. candidates from VPA’s School of Art (studio arts and illustration programs), School of Design and Department of Film and Media Arts. A reception will be held on Saturday, May 7, from 3-6 p.m.

Traditionally a literary and cinematic technique, “retcon” is the abbreviation of “retroactive continuity” and refers to a new piece of information introduced to a story that alters the interpretation of a previously established narrative. “Retcon” is not just employed in a fictional context, read in a book or viewed on a screen but experienced in the world around us. In the current climate, we are absorbing new information constantly (like it or not!), and it is challenging the way we see everything—day to day, hour to hour. Our internal database is developing at record speed. What was recognized as commonplace merely a year ago is being reexamined, and at times, by the entire world in unison.

The artists in this exhibition are evaluating and reframing their personal histories, traditional standards of art-making and history as a whole. While in everyday life, the constant introduction of so-called “facts” and opinions appear erratic; the investigations held within the artworks in the exhibition are much more intentional, slower-paced, steady. They are careful and curious assessments removed from the web of media and into meticulously presented ideas.

About the Curator
Laura Dvorkin ’06 is the co-curator of “The Bunker Artspace: Collection of Beth Rudin DeWoody” in West Palm Beach, Florida. She has worked with the collection since 2008, managing large presentations of the collection at institutions and the exhibitions that DeWoody curates. Dvorkin’s recent exhibitions include “In the Absence of Light: Gesture, Humor and Resistance in The Black Aesthetic” at the Rebuild Foundation, Chicago, and “A Very Anxious Feeling: Voices of Unrest in the American Experience” at the Taubman Museum of Art in Roanoke, Virginia.

Patrick Boehmcke is a writer, filmmaker and visual artist. Using video as his primary tool, his work spans a variety of forms and genres, including poetry, documentary, comedic skits and sci-fi/horror narratives. His work largely focuses on the alienation, oddity and yearning of suburban American living. patrickboehmcke.com @xxbottomless_pitxx Vimeo: Patrick Boehmcke

Aaron Burleson is a photographer born in Hartford, Connecticut, and raised in Glastonbury, Connecticut. He received a bachelor of fine arts in photography with an art history minor from Hartford Art School and is currently a master of fine arts candidate and adjunct instructor at Syracuse University. aaronhunterburleson.com @aaron.burleson

Kevin Frazier is an artist from Chicago who is currently based in Brooklyn, New York. He received a B.F.A. from the University of Missouri and an M.F.A. in studio art from Syracuse University. If not in the studio you can find him hanging around the climbing gym or skatepark. @lazerbeams_unlimited

Manya Gadhok is a documentary and narrative filmmaker who is dedicated toward telling stories that find its roots in the experiences shared with and around her family. Her work explores the themes of gender discrimination and class divide prevalent in one’s society.  She aims to create films not just for entertainment but for a better change in the society at large. @manyagadhok, @instamanyagadhok.

Sierra Haynes was born in Syracuse, New York. In 2015 she received a B.F.A. in photography from the Maryland Institute College of Art in Baltimore. Her work deals with ideas of family, memory and childhood, by way of observing her surroundings to realize a deeper understanding. Sierrahaynes.com @sierramhaynes

Jana Herman is an artist working with image and text originally from Massachusetts. Her practice considers memory, forgetting and the evolution of understanding through time. She has assisted artists and educators across media and graduated from Oberlin College in 2015. www.janaherman.com @janaherman

Douglas Johnson is curious about painting, digital space, world-building, video games and always wants to see beautiful things if he can find them. He is originally from New England and grew up in the Carolinas. From a young age, he was interested in drawing, painting, games and music. He now works at the intersection of painting and digital technology. www.douglasbjohnson.com @komodo_baggins

TamaraQuiet Storm~Jordan is an Indigenous visual, recording artist; author; and illustrator from Boston. She uses video and sound to document moments in time and as her voice to share her narrative. Her work is embodied in breaking down the stereotypes of what it means to be Indigenous in the 21st century and decolonization.

Mike Kalish  spent his childhood outside Albany, New York. He discovered an interest in making sculpture during his first semester of college. An intervening lifetime returned Kalish to upstate New York and to the organized pursuit of his art. A student of affordances, our sensitivities still confound him. @kalishmichael

Alex Kulick is an interdisciplinary artist working with artificial intelligence, machine learning, video projection, printmaking and installation. Using her roots in the South as thematic influence, and through the use of “deepfakes,” AI-generated moving image and sculptural installation, she explores how interpersonal, domestic and public space affect the individual. @kulickarts

Xuan Liu is an interdisciplinary artist. She works conceptually through social engagement actions and performances, which offer places for her to examine strategies of dealing with real-life struggles. Her works have been exhibited internationally in New York, Paris, Hong Kong, Shanghai, etc. www.artistxuanliu.com @liuxuan1895

Yanyi Liu was born and raised in Chongqing, China, a place where almost all food is spicy. Her work has a clear personal style, and each character in her illustrations has their own personality. Recently her work has been selected in Communication Arts, AI-AP Motion Art Awards, 3×3 Illustration Annual, World Illustration Awards, etc. www.yanyiliu.com @zoooeliu

Nadiya Nacorda is an artist working with photography and video. Her work explores the nuances and entanglements of inheritance(s) while considering themes of magic, affection, identity and mothering along with Blasian feminine interiority/subjectivity. She often collaborates with the women in her family, drawing inspiration from their relationships and shared history. www.NadiyaNacorda.com @NadiyaNacorda

Valeria Chikaodile Oha was born to Nigerian parents who made sure she was exposed to their culture throughout her childhood. Currently she is working with mixed media to showcase the struggles of being a Black woman in America. Her current body of work focuses on exploring the idea that society both demonizes and fetishes the Black body. @themelantedfemme_valeria

Zhu Zhu grew up in a family with artistic tradition, so art looked appealing to her when she was a child. She decided to choose art as her undergraduate study major as well as her life career. In 2018 she came to the U.S. and began to learn computer art. During this time, she started to try new ways to show her concept in her work. She makes experimental animation and some sculptures in her M.F.A. studies.  zhuzhu19962017.wixsite.com/website  @zhuazhua_zhu

Leah Bella Zinder is an artist passionate about historical crafts, including lace-making and metalsmithing. She is currently pursuing an M.F.A. in studio arts at Syracuse University and received a B.F.A. in metals from the University of Illinois. She is also involved in the local Jewish community, where she teaches young children. LeahBella.com@LeahBella.Z

Michael Christopher Zuhorski received a B.F.A. in photography from the College for Creative Studies in Detroit. His practice is concerned with gradual change, sustained attention and the fragile relation between seeing and knowing. michaelzuhorski.com @michael_zuhorski