Literacy expert and advocate Allen Berger ’57, G’66 was honored with the William Pearson Tolley Medal for Adult Education and Lifelong Learning at the 2022 One University Awards on Friday, April 22. 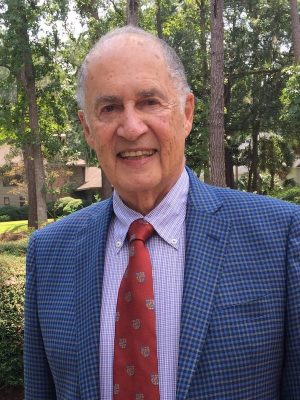 The One University Awards is a celebration of excellence in academics, scholarship, creative work and dedicated service by members of the Syracuse University community and beyond.

“Not only has Allen Berger supported others’ lifelong learning through his professional work and service for decades but he is also the quintessential example of a lifelong learner himself,” says Kelly Chandler-Olcott, interim dean, School of Education. “He is joining new communities and mastering new content well into retirement, which I find inspirational.”

After Berger graduated from Utica College in 1957—then part of Syracuse University—he served in the U.S. Army (including six months active duty) before becoming a reporter/photographer for the Lynchburg (Virginia) News. He then earned a master’s degree from Albany State Teachers College (1960), beginning his long career in teaching. He taught English and reading for several years at Utica Free Academy and Monroe High School in Rochester, New York, before earning a doctorate from Syracuse University School of Education in 1966.

As an academic and scholar, Berger co-authored and co-edited 10 books, published more than 400 articles and chapters on reading and writing education, and served as a resident writer in language arts at Houghton Mifflin. He is a past recipient of the Laureate Award from the College Reading Association and is a Fellow in the National Conference on Research in Language and Literacy.

At Miami University, Berger began Teens for Literacy. This program encourages inner-city students to promote literacy in their schools and communities. It has been used in more than 100 schools throughout the country, including in his adopted home of Georgia, thanks to Berger’s own advocacy.

Berger is former chair of the Live Oak Public Libraries Board of Trustees; former president and secretary of the LOPL Foundation (helping to organize the Savannah Children’s Book Festival); and a member of the Academic Success and Youth Development panels of the United Way of the Coastal Empire. After retirement, Berger added to his expertise by training to serve on the Chatham County Board of Equalization, which allows property owners to appeal property values.

To honor his parents—Henry and Goldie Berger, who built a successful tailor shop and dry cleaning business in Utica—Allen established the Dr. Allen Berger Endowed Scholarship. Funded through a planned gift, the scholarship provides financial assistance to School of Education graduate students, with preference given to studies in literacy education.

Syracuse University established the Tolley Medal in 1966 to recognize outstanding contributions by national and international leaders in what was then known as adult education. For four decades, William Pearson Tolley was one of the nation’s pre-eminent leaders in higher education. By the time he retired in 1969, having served as the University’s Chancellor for 27 years, he had reconfigured the Syracuse campus, tripled enrollment and made lifelong learning his career legacy.

In naming the award for Tolley, the Board of Trustees paid tribute to a man whose own interest was expressed in consistent, personal support of Syracuse’s adult education activities worldwide.