Celebrated broadcaster Mike Tirico, one of the most recognizable faces and voices in television sports coverage, will deliver the alumni keynote address at the 2022 College of Arts and Sciences (A&S) | Maxwell School of Citizenship and Public Affairs Undergraduate Convocation Ceremony. The celebration will be held Saturday, May 14, at 8:30 a.m. in the stadium. 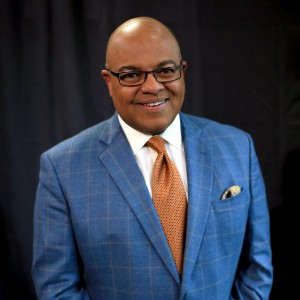 Tirico, who earned a B.A. in political science from A&S | Maxwell and a B.S. in broadcast journalism from the Newhouse School in 1988, is host and play-by-play announcer for NBC Sports Group. At NBC he covers an array of high-profile sporting events including “Sunday Night Football,” the Summer and Winter Olympics (which he hosted), select golf telecasts and other major events.

Tirico joined NBC after 25 years as one of the signature voices on ESPN/ESPN Radio and ABC Sports, including assignments for ESPN’s “Monday Night Football,” the NBA, college basketball, golf, tennis and other major events. He previously hosted the nationally syndicated “Mike Tirico Show” on ESPN Radio, launched in 2007 from the studios of WAER-FM—the same public radio station at Syracuse University where Tirico began his broadcasting career. In 2010, Tirico was named Sportscaster of the Year by the National Sportscasters and Sportswriters Association (NSSA), an award voted on by his industry peers.

“To be a successful broadcaster on the global stage is a form of diplomacy. It requires the ability to connect with diverse people while navigating potentially sensitive issues across cultures and values, and political and economic systems,” says David M. Van Slyke, the Maxwell School’s dean. “Mike’s dexterity in addressing challenging issues like human rights and structural racism, and health and economic disparities while never losing sight of his audience is what makes him stand apart in his profession and as an alumnus of Maxwell and the College of Arts and Sciences.”

Tirico was elected to the Syracuse University Board of Trustees in 2016, where he serves on the Advancement and External Affairs Committee, and Enrollment and the Student Experience Committee; the National Campaign Council Executive Committee; the Subcommittee for Marketing and Communications; and the Free Speech Trustee Advisory Group.

He and his wife, Deborah Gibaratz Tirico ’89 (Martin J. Whitman School of Management), have established the Mike Tirico Scholarship Endowment and supported other initiatives in the Maxwell, Newhouse and Whitman Schools, WAER public media organization, and Syracuse University Athletics.

For his service and commitment to the University, Tirico received the George Arents Award (2005) and the University’s Outstanding Young Alumni Award (1996).