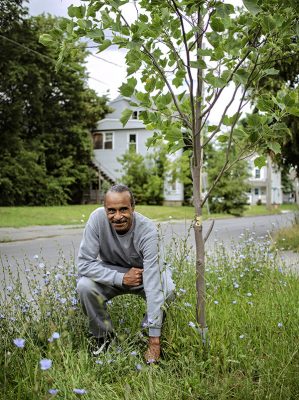 This photo of Clifford Ryan is one of 51 images on display at ArtRage Gallery. Ryan stands by “the tree of life” planted along Cannon Street in memory of his son, Duriel Lamar Ryan. (Photo by Keith Waldron)

In a photo taken by Keith Waldron in 2021, Clifford Ryan crouches next to a tree on Cannon Street on Syracuse’s South Side. He leans alongside the still sprouting “tree of life” planted in memory of his son Duriel Lamar Ryan, who he lost to gun violence in 1999.

This is merely one of the thousands of moments captured for The Stand’s Photo Walk, an annual social photography event designed to highlight and memorialize life within urban neighborhoods.

This year, 51 of the more than 11,000 photos accumulated over the last 12 years are displayed at ArtRage Gallery in a retrospective exhibition, “From Where We Stand: Photographs from The Stand’s Annual South Side Photo Walk.”

Ryan, founder and vice chair for OG’s Against Violence, said he loves his community. As a Syracuse native from the South Side, born and raised, he’s happy to have his home shared through the lenses of others, highlighting it as he knows it: a place of love, strength and care.

“Community means everything to me. I love my community,” Ryan said. “And there can be no unity without community.”

The exhibition showcases work from 45 photographers of all backgrounds, from students, Syracuse natives, as well as professional and amateur photographers alike, interested in capturing different aspects of the city.

Community Engagement Organizer for ArtRage Gallery Kimberley McCoy said the Photo Walk is an important way to create a visual history of the South Side.

“This walk is such an important part of documenting Syracuse history,” McCoy said. “I can’t really think of any other project like that that’s been documenting a specific neighborhood for that long.”

The annual Photo Walk initially mirrored a global walk created to bring communities of photographers across the world together. Scott Kelby’s Worldwide Photo Walk was established more than a decade ago, and was held each July before transitioning to the fall. The Stand continued this walk each July on a smaller scale, capturing one Saturday each summer, year after year. 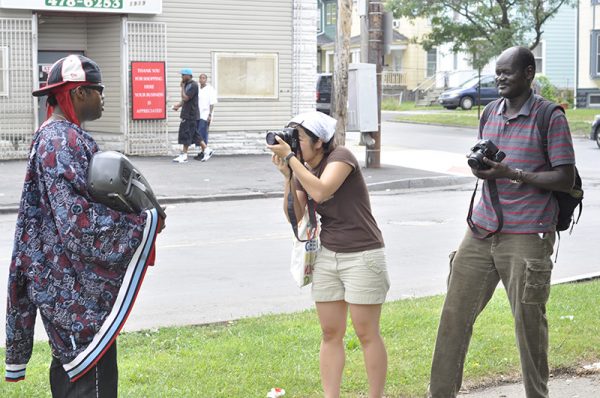 A behind-the-scenes look at participants of the first Photo Walk held in July 2010.

“I try to find and prioritize stories the community brings to me, not just what press releases come over,” Kang says. “The Photo Walk is a great way to meet people out and about or even directly in their front yard.”

What began as a small group of eight to 10 people walking through the South Side in 2010 grew to 70 plus individuals by 2019. That year, additional South Side walks included a historic walk of the architecture along South Salina Street guided by David Haas, the creator of the well-known Instagram page @SyracuseHistory, and a walk around the neighborhood surrounding the I-81 viaduct.

The event was reimagined in 2020 to avoid large gatherings because of COVID-19 restrictions. In order to still find ways to capture the city in photos, Kang organized a citywide photo contest as a way to still collect images and document this truly unique moment. Winning images from the 2020 photo contest are included in the gallery show.

Solon Quinn, a new volunteer and mentor with the Syracuse Journalism Lab, joined last summer when organized Photo Walks returned after Ryan encouraged him to volunteer. He said people should follow their passion of whatever art form they love but thinks education of and giving back to the community in other ways is just as important. 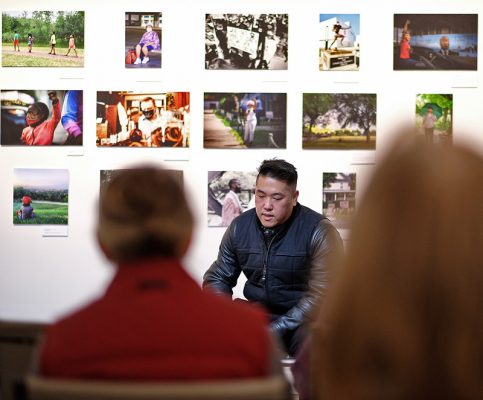 Photo volunteer Solon Quinn speaks during the April 6 Gallery Talk on how he engages with local communities and builds trust. Displayed behind him are the 2020 Photo Contest winners. (Photo by Mike Greenlar)

“I think [photographers] should be very respectful and aware when that art form is going to utilize human beings from different places of different cultures that you’re not used to being a part of,” Quinn says. He believes people should learn and understand the culture of the community before they participate in the Photo Walk.

“From Where We Stand” is on display through May 14 at ArtRage Gallery, located at 505 Hawley Ave. in Syracuse. The exhibition is available for viewing from 2 to 6 p.m. Wednesday, Thursday and Friday and from noon to 4 p.m. Saturdays.

Additionally, an online gallery is available for those wanting to view the exhibit from home.

“We all know there’s some adversities that we face in the community,” Ryan said. “But [the Photo Walk] is a great way to show the community is a place of love.”

Plans are underway for the 2022 Photo Walk along with additional photo meetup opportunities. This summer’s big South Side Photo Walk is set for Sunday, June 19.

Story by Darian Stevenson, a graduate student in magazine, news and digital journalism in the S.I. Newhouse School of Public Communications