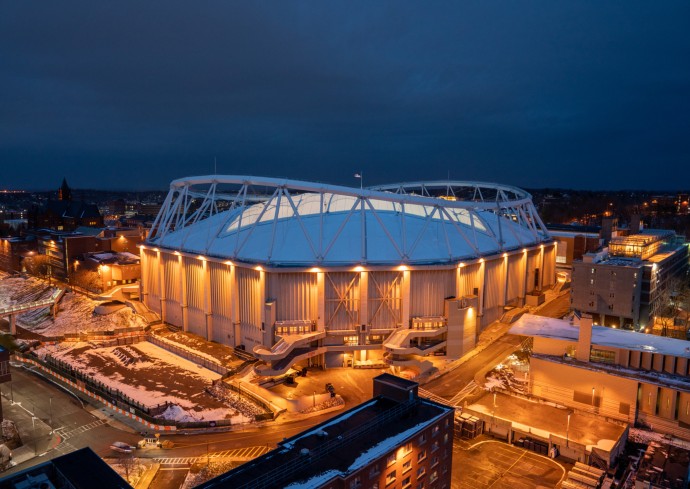 For more than 40 years, the Carrier Dome has been synonymous with Syracuse University and Orange Athletics. Carrier’s historic 1979 gift represented the first naming agreement for a major stadium in college sports, and one of the first in all of sports. More than four decades later, Carrier, whose support was instrumental in creating one of the most iconic and electric sports and events venues, has agreed to allow Syracuse to rename its stadium, effective May 1.

“With Carrier’s cooperation, we will seek to rename our stadium while we continue our work to transform the experience for our students, faculty, staff, fans and Central New York community,” says John Wildhack, director of athletics. “Without Carrier’s generosity and longstanding support, completion of the Carrier Dome would not have been possible, nor would the decades of iconic sports moments and Central New York memories. We are eternally grateful for the tremendous impact Carrier has had on Orange Athletics, the Syracuse University community and the Orange fan base.”

While Syracuse University considers the future identity of the stadium, it will also embark on the next phase of its work to enhance, elevate and expand the stadium experience. This includes a complete reseating, a new publicly accessible event facility and an upgrade of the entire digital infrastructure. The University will begin work later this spring with some of it scheduled to be complete as early as September 2022. The University continues to work closely with the appropriate state and local agencies to ensure enhancements to the stadium align with and support the state and county’s economic development priorities and processes.

“Syracuse University is proud of the important role the Dome plays in the Central New York community and grateful for its longstanding relationship with Carrier,” says Chancellor Kent Syverud. “The Dome has been an iconic sports and entertainment venue for more than 40 years. These new enhancements will generate new and additional economic activity in Central New York and continue the Dome’s reputation as one of the top collegiate venues for generations to come.”

The latest phase of renovations builds on the recently completed $118 million transformation of the Dome funded entirely by the University and private philanthropy without state or federal funding. Upcoming renovations include:

The Dome is a year-round venue that hosts some of the world’s top performers, college and professional athletic competitions, and the very best in family entertainment. It welcomes more than 935,000 visitors each year, contributes more than $240 million in income to the Central New York economy and supports more than 5,000 local jobs. Once complete, these enhancements are projected to generate nearly $217 million in new travel and tourism spending across Central New York between 2022-25.

“Syracuse University and the Dome are central to the economic, cultural and social well-being of Central New York,” says Vice Chancellor for Strategic Initiatives and Innovation J. Michael Haynie. “Combined with the University’s $118 million transformation, the Dome will be poised to be the go-to destination for athletic, entertainment, academic and other community events and activities. Accelerating this project will not only expedite these exciting enhancements, but also elevate and increase economic opportunity in Central New York.”

Pete Sala, vice president and chief campus facilities officer, says he and his team are looking forward to getting started on this next phase. He adds that he has received positive feedback from patrons on the work to date, who have expressed equal excitement for what’s to come.

“We have the best fans and patrons who constantly go out of their way to share feedback, both positive and constructive,” says Sala. “We love providing them with the best experience possible and are confident this next round of renovations will have a significant impact on the fan experience. We are eager to get started and even more excited to get this work complete.”

To further cultivate a vibrant, prosperous and economically thriving community, as part of this next phase, Syracuse University will also:

To honor and celebrate International Day of Persons with Disabilities, Syracuse University and the Southeast ADA Center are holding a hybrid presentation, “Why No One Has To Be Normal Anymore,” from 7 to 8:30 p.m. on Thursday, Dec. 1. Stephen…