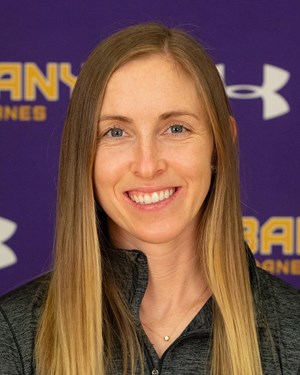 Katie (Rowan) Thomson ’09, G’10 helped grow the Syracuse University women’s lacrosse program into a perennial power during her four years on campus, and in the process, she rewrote the Orange’s record books while taking the women’s lacrosse team to new heights.

An electrifying playmaker, Thomson graduated as Syracuse’s all-time leader in points (396) and assists (164). A three-time All-American and two-time BIG EAST Attacker of the Year, Thomson’s teams won the program’s first-ever NCAA tournament game in 2007 and later reached its first Final Four in 2008.

During an emotional pre-game ceremony before a Syracuse University men’s and women’s lacrosse doubleheader on Feb. 20, Thomson entered rare company, becoming the first female lacrosse player and second female student-athlete to have her jersey retired when her No. 21 was raised to the stadium rafters.

Thomson, who led the U.S. Women’s National Team to World Cup championships in 2009 and 2013, earned bachelor’s degrees in inclusive elementary and special education from the School of Education and in sociology from the Maxwell School of Citizenship and Public Affairs and the College of Arts and Sciences, and a master’s degree in literacy education (birth through grade six).

We recently sat down with Thomson to reflect on her jersey retirement—“it was the honor of a lifetime”—her favorite memories from her time with the Orange, how Thomson’s former coach Gary Gait, the current Syracuse men’s lacrosse coach, “changed the game” for her and how she’s applying the lessons she learned at Syracuse to the next wave of talented Division I standouts as the head women’s lacrosse coach at the University at Albany.

LISTEN: Hear the full conversation with Thomson on the ’Cuse Conversations podcast.