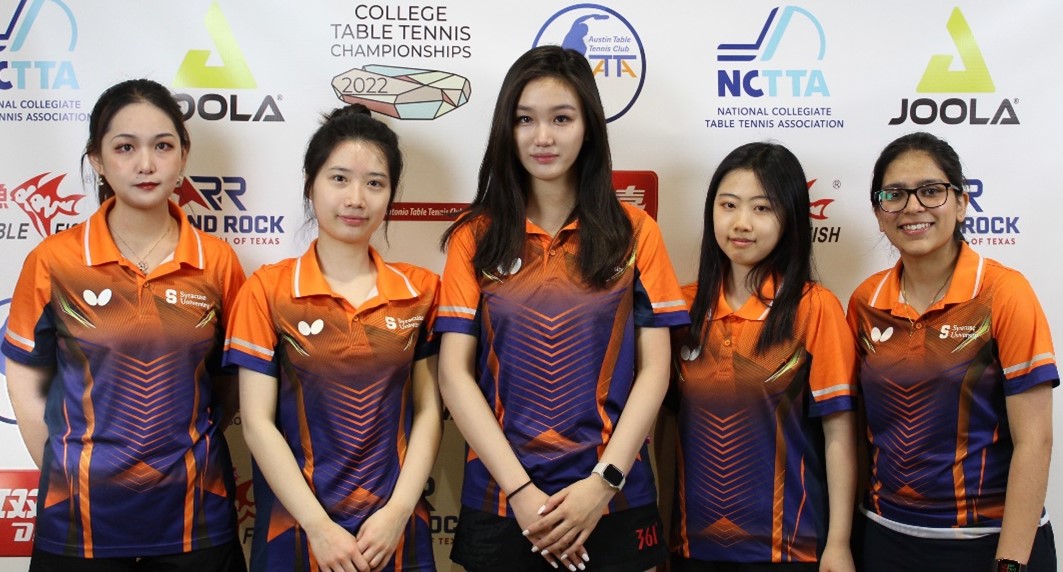 On April 8, led by Team Captain Rachel Yang ’23 and Club President Xinyue Mao ’22, the University’s women’s table tennis team showed up to the Round Rock Sports Center, marking the first time the club team has ever participated in the National Collegiate Table Tennis Association (NCTTA) national competition. More than 250 athletes from around the United States and 16 women’s teams participated in the 2022 NCTTA Championships in Round Rock, Texas.

For the 2021-22 academic year, Syracuse had a particularly strong team with many talented table tennis players, including Rachel Yang ’23 (finance and business analytics), Priya Rao (graduate student in data science), Yaqin Tang (graduate student in chemical engineering), Yiheng Zhang ’24 (public relations and psychology) and Xinyue Mao ’22 (mathematics). The team worked long and hard during their divisional and regional tournaments to defeat many challenging competitors and directly qualify for the championships.

Professor Weiwei Zheng, faculty advisor of the team, says, “We are so proud of our women’s team to have reached the National Championships and to be counted among the elite players at the college level today. We are extremely grateful for the support from the recreation team in the Barnes Center at The Arch, Student Experience, as well as many faculty and friends, to make the national trip possible.”

During the preliminary stage competitions leading up to the championships, Syracuse’s team defeated Brown, Texas A&M and lost to MIT, advancing them to the final eight in the championship draw. In the Knockout Stage, after losing to Texas marginally with a 2:3 record, the team became the tie five team, which is the highest rating in the team’s history.