Everyone considers sperm to be made exclusively by males. But did you know that females also make sperm? Well, it turns out that females also contribute to what makes a sperm a sperm. Nearly 20 percent of couples in the United States fail to conceive naturally after one year of trying, according to the Centers for Disease Control and Prevention. In species with internal fertilization, such as humans, the ability for a female to become pregnant and carry a pregnancy to term is dependent upon effective interactions between sperm and the female reproductive tract (FRT). When those interactions are defective, the result can be a failed pregnancy. Therefore, understanding the factors that contribute to sperm viability between copulation and fertilization is crucial. 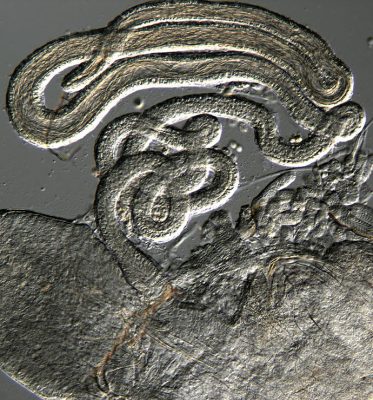 Pictured are spermatozoa of Drosophila melanogaster within a female’s specialized sperm-storage organ, where they await the opportunity to fertilize ova. (Image courtesy: Scott Pitnick)

A research team from the College of Arts and Sciences’ Department of Biology and Cornell University, led by Steve Dorus, associate professor of biology at Syracuse University, have been studying the life history of fruit fly (Drosophila melanogaster) sperm to better understand molecular continuity between male and female reproductive tracts. In other words, how the male and female reproductive tracts provide support to keep the sperm viable before fertilization. Their results, recently published in the journal Proceedings of the National Academy of Sciences USA (PNAS), shed light on important events that may play a role in infertility that up until now have been poorly understood.

The team, which includes members from the University’s Center for Reproductive Evolution, explored the compositional changes in fruit fly sperm, beginning shortly after they leave the testis, following insemination and finally after protracted storage within the FRT. Fruit flies are powerful model organisms for investigations such as this one because they are easy to culture in the laboratory, have a short generation time and their genetics are richly understood. In their study, the group uncovered that the proteome, or protein makeup, of the sperm undergoes substantial changes after being transferred to the FRT.

For species with internal fertilization, a sperm’s developmental ‘journey’—on the way to its final destination of fertilizing an egg and beginning a new life—transcends both male and female reproductive tracts. After leaving the testis, sperm travel through the male’s seminal vesicles and descend through the ejaculatory duct, where they mix with seminal fluid proteins. The team found that many of these seminal proteins are progressively lost after sperm migrate beyond the site of insemination within the FRT. Conversely, female-derived proteins that may help the sperm with functions such as energy metabolism, begin to associate with the sperm immediately after mating, signifying a changing of the guard of proteins. After several days of storage within the FRT, the research team was surprised to discover that nearly 20 percent the sperm’s proteins had been replaced by female-derived proteins. The female contributions support sperm viability during the prolonged period between copulation and fertilization. This “hand-off” in the maintenance of sperm viability from males to females means that sperm are materially the product of both sexes, and this may be a crucial aspect of reproduction in all internally-fertilizing species, including humans.

By studying the intimate ways in which sperm interact with the FRT during the final stages of functional maturation, the team’s research advances understanding of animal fertility and the contributions of each sex to reproductive success.

Their research, which appears in the March 15 issue of PNAS, was chosen as that edition’s cover art, signifying the high impact of their work. The photo was captured by co-author and biology Professor Scott Pitnick, and provides a close-up view of sperm within an organ specialized for sperm storage in a female reproductive tract of Drosophila melanogaster.

In addition to Dorus and Pitnick, other co-authors from Syracuse University included former postdoctoral researcher Erin McCullough and doctoral graduate Emma Whittington. Co-authors from Cornell University were Professor Mariana Wolfner and postdoctoral researcher Akanksha Singh. The team’s research was funded by the National Science Foundation, the National Institutes of Health and a gift from Mike and Jane Weeden to Syracuse University.

Read the team’s full paper, “The life history of Drosophila sperm involves molecular continuity between male and female reproductive tracts.”>PNAS is the official journal of the National Academy of Sciences (NAS), and is an authoritative source of high-impact, original research that broadly spans the biological, physical and social sciences.