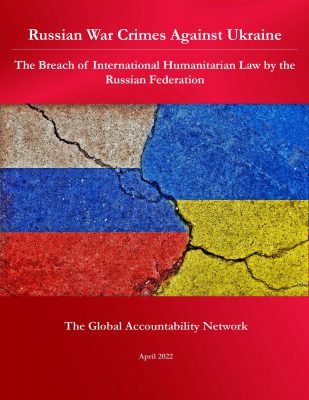 Authored by David Crane, Syracuse University Distinguished Scholar in Residence, and Syracuse University College of Law students, a new white paper, “Russian War Crimes Against Ukraine. The Breach of International Humanitarian Law by the Russian Federation [PDF],” offers in-depth accounting and accusations of crimes committed by the Russian Federation and President Vladimir Putin during the invasion of Ukraine.

The paper lays out an indictment of numerous war crimes, crimes against humanity and crimes of aggression from Feb. 24, 2022, to April 1, 2022, during the invasion of Ukraine. The report includes a sample draft (Appendix A, page 47) of a criminal indictment against President Vladimir Putin for his war crimes. The white paper was created by the Ukraine Task Force, comprising law students and legal scholars, with the goal to create a non-partisan, high-quality analysis of open-source materials.

“Because of his aggressive acts and his intentional targeting of Ukrainian civilians, Vladimir Putin has lost all political legitimacy and has made Russia a pariah state. This white paper catalogs the horror he has unleashed and lays out a pathway for holding him accountable for aggression, war crimes and crimes against humanity,” said David Crane L’80, the project leader of the white paper and Distinguished Scholar in Residence at Syracuse University College of Law.

Crane is the founding chief prosecutor of the Special Court for Sierra Leone, an international war crimes tribunal where he indicted Liberian President Charles Taylor, the first sitting African head of state in history to be held accountable in this way.

According to the report on Ukraine:

“Since the invasion, Ukrainian citizens have been forced to endure kidnappings, property destruction, starvation, terror,  shellings, and murder at the hands of the Russian Federation. As is consistent with the complex and intricate history of Ukraine, Russia once again seeks to assert its dominance and control of the territory in wanton violation of international law and Ukrainian sovereignty. As of the writing of this document, President Zelenskyy continues to lead his country and seek peace for its citizens, while the Russian Federation continues its campaign of atrocities meant to terrorize Ukraine and strip it of its national identity.

“There is no clearer violation of the laws of humanity. At its most basic elements, international law and the laws of humanity establish self-determination and self-expression of a people as fundamental rights free from infringement by foreign powers. President Putin, and the rest of his Russian Federation political and military command seek to upend these values and establish a new world order with authoritarianism, terror, and oppression at its center. The international community cannot remain silent, and the road does not end at sanctions—it begins.” (page 40)

The 276-page report lays out the history of Russian aggression in Ukraine, the legal framework of accountability, individuals who bear the responsibility for crimes and the specific violations of international law.

“The Ukraine Task Force established by the Global Accountability Network (GAN) was an incredible and unique experience that allowed law students to take an active part in international legal discourse,” said Christopher Martz, a third-year Syracuse Law student, the taskforce director and one of the lead writers of the white paper. “The Ukraine Task Force encountered serious difficulties in documenting war crimes in real time, especially considering the fact that GAN pulled students from all across the country. However, the leadership of Professor Crane and the commitment of GAN volunteers helped overcome these difficulties, resulting in an important living document that creates a framework of accountability moving forward.”

Additionally, the appendix of the report offers exhaustive details of how the researchers documented their evidence:

“We have done this once before and we can do it again with the International Criminal Court prosecuting the alleged war crimes and crimes against humanity and a United Nations-backed Special Court for Ukraine, the world’s second hybrid international war crimes tribunal, the Special Court for Ukraine the crime of aggression,” Crane said. “Its mandate will be to prosecute those who bear the greatest responsibility for the aggression against Ukraine and must include President Vladimir Putin,”

Members of the media, please contact Ellen James Mbuqe, executive director of media relations at Syracuse University, at 412.496.0551 or ejmbuqe@syr.edu for interviews.

David Crane was a professor of practice in the Syracuse University College of Law from 2006 until his retirement in 2018. During that time, he taught international criminal law, international humanitarian law, military law and national security law. While at Syracuse, Crane founded Impunity Watch, an online student-run law review and public service blog and the Syrian Accountability Project (SAP), an internationally-recognized effort among students, activists, journalists and non-governmental organizations to document war crimes and crimes against humanity during the Syrian Civil War. Crane later returned to the College of Law as a Distinguished Scholar in Residence.

In 2014, Crane co-authored the “Caesar Report” that detailed the systematic killing of thousands of people in Syria and testified about the report at the UN Security Council. Crane also has testified to the US House of Representatives Committee on Foreign Affairs and its Subcommittee on Africa, Global Health, Global Human Rights and International Organizations on the Syria crisis and related human security and humanitarian issues. In 2016, Crane helped to draft a UN resolution “to establish a special team to ‘collect, consolidate, preserve and analyze evidence’ as well as to prepare cases on war crimes and human rights abuses committed during the conflict in Syria.” Subsequently, he assisted the UN in setting up the independent justice mechanism mandated by the resolution.

The city of Buffalo has faced many hard times in these past several months, including the mass shooting at Tops, the December blizzard and previous winter storm, a deadly house fire, and now worrying about Buffalo Bills player Damar Hamiln…

With the news of the U.S. is set to approve the Patriot missile defense system, two of our Syracuse University faculty experts shared their thoughts. Army veteran Sean McFate, a senior fellow at the Atlantic Council and an adjunct professor…