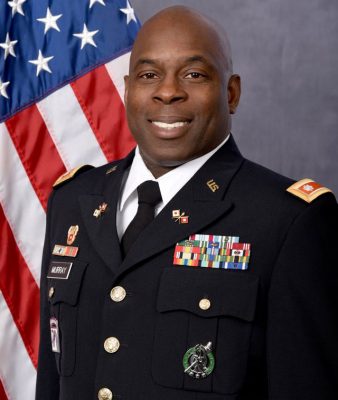 When Dwayne Murray ’97 was about 7 years old, his grandmother bought him a Syracuse University sweatshirt from the Salvation Army. Born in Brooklyn and raised between the Bronx and White Plains, N.Y., Murray lived with his grandparents for his first 12 years. When his grandmother passed away, that sweatshirt became one of his dearest possessions.

“Growing up in the New York metro area, there’s instantly an identifiable passion for anything Syracuse University,” he says. “I’ve always felt a gravitational pull in my heart just to be in that space.”

Today, “Team Murray,” which includes Dwayne, his wife Alison ’01 and sons Dwayne II, Caleb and Malachi, is feeling that pull and seeing Orange as they set their sights on a return to Syracuse this June.

“I speak with the authority of my family team,” he says. “Team Murray is bought in. We love Syracuse. We love this school.”

Murray also speaks with unbridled enthusiasm for his new role as the deputy director of the Office of Veteran and Military Affairs (OVMA). The job is especially suited for his experience, abilities and profound passion for service, students and Syracuse.

“This opportunity screamed at me. It aligns with my passion, which is being a soldier and supporting and mentoring soldiers. It also aligns with my purpose, which is higher education and working with folks who want to accomplish their dreams,” he says. “To be on campus and advocate for first-generation students, student-athletes, military-connected students—people like me—is just as great an honor as serving our nation in uniform.” 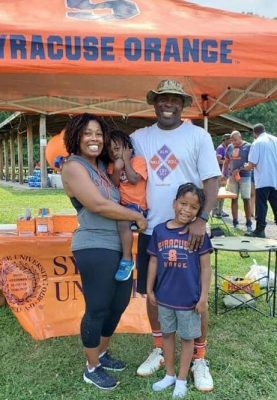 Dwayne Murray with his wife, Alison, and two of their three sons.

Murray was a track and field athlete and graduated with degrees in sociology and information studies. He enlisted in the Army and continued his higher education with a master’s degree in management from the University of Phoenix, and a master’s in higher education administration from the University of Louisville, where he also earned a graduate certification in organizational change. His Army service most recently includes a leadership role as professor of military science with Alabama A&M University’s Army ROTC. Murray is also a graduate of the Command and General Staff College, Combined Arms Services Staff School, Signal Officer Captain’s and Basic Courses, the Primary Leadership Development Course, Joint Cyber Operations Planner’s Course, and the Joint Targeting Course.

Murray’s experience as a Syracuse student-athlete, Army veteran and higher education leader makes him an ideal candidate to sink his teeth into this new position. It also seems implausible that his path into Syracuse started with a rejection letter that arrived on his birthday his senior year in high school.

“My mom encouraged me to reapply, and I worked hard. I literally carried around a dictionary to study and increase my vocabulary to be better prepared for the SAT, which I took three times,” he says. “When I tried again, my admission was contingent on going through the Summer Institute, which was part of the Higher Education Opportunity Program (HEOP). I knew I had to knock it out of the park. I was destined to be here.”

While Murray has always seen Syracuse as part of his destiny and thinks of a Syracuse University education more like becoming part of a family, he couldn’t possibly have known how connected his Syracuse family would become. Alison also graduated from the University, though they were never students on campus at the same time. They didn’t cross paths until they met in the Army while stationed halfway across the world in Korea.

“Only a divine creator would be able to make that happen,” he says. “She didn’t believe I went to Syracuse at first. She drilled me to make sure I was telling the truth, even after I told her all the dorms I lived in and showed her my student I.D. card.”

Dwayne still carries that student I.D. card with him, along with his alumni card, almost 25 years after graduation. As he walks the campus, he’s fully expecting to experience some full-circle, iconic moments. He’s especially looking forward to taking a picture with his new work I.D. next to his old student I.D.

“We’re all Orange,” he says. “I’m looking forward to being a pillar to the university community and an advocate for every student on campus that I come into contact with.”