‘Freedom Is in Our Blood’: Ukrainian Community Members React and Respond to War With Russia 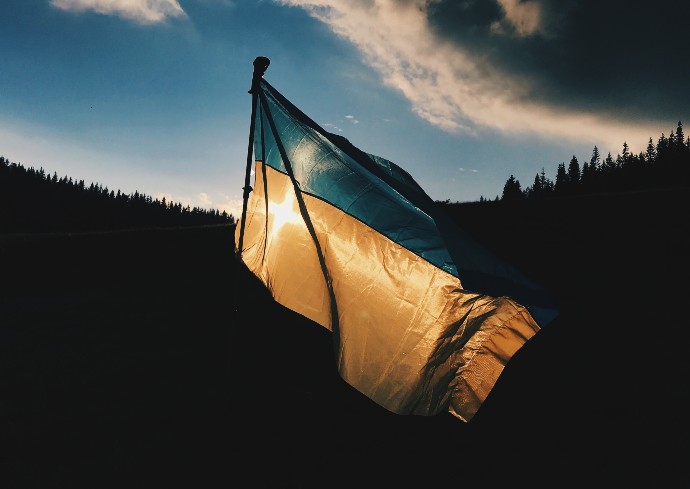 Alona Kulesha is a Ph.D. candidate in chemistry in the College of Arts and Sciences, studying protein design and function. Linh Nguyen Phan Bao G’20 is an operations research analyst in the D’Aniello Institute for Veterans and Military Families, a role she entered after earning a master of public administration (M.P.A.) degree from the Maxwell School.

What unites these two women is that both are natives of Ukraine, and have watched with horror as their home country has been invaded by Russia, enduring relentless air strikes, bombing and shelling of its cities and suburbs for the past five weeks.

Kulesha is from a small town in Central Ukraine, about 120 kilometers south of Kyiv. She says that while she is thankful to be studying abroad in America, she has friends and family all over Ukraine, some of whom have had to quickly evacuate and find shelter elsewhere and others who remain in their homes in regions of Ukraine that are safe, for now.

“I have family members who were lucky to escape during the first hour of the humanitarian corridor. They literally didn’t pack, they just got in the car and started driving away,” she says. Because of Russia’s continued assault on the humanitarian corridors that have been set up as a path out of besieged areas, it hasn’t been a reliable means of escape for Ukrainian civilians. “My cousin had friends who started packing and planned to leave [via the humanitarian corridor] one hour later than them. They couldn’t leave because the shelling had started again.”

Nguyen, a second-generation immigrant to Ukraine of Vietnamese heritage, worked for the Ukrainian government in public affairs and communications for six years prior to coming to Syracuse to pursue an M.P.A. This included time spent supporting the U.S. Agency for International Development to rebuild and introduce innovation to the city of Mariupol following the destruction that occurred in the aftermath of attacks by Russian-backed separatist troops in 2014.

Over the past five weeks, Mariupol has been a key target for Russian forces who again encircled the city. For the past three weeks, Mariupol was declared a humanitarian crisis, with as many as 100,000 citizens remaining trapped there with diminishing supplies of food, water and medicine. “It was a beautiful city,” says Nguyen. “It’s very personal for us—it makes everyone hurt to see what is going on in that city right now.”

Nguyen’s parents left Ukraine to live with her sister when she came to Syracuse in 2019. In December, COVID thwarted plans for them to return to Ukraine. Devastatingly, Nguyen has lost many friends to the violence in Ukraine, both in 2014 and over the past month. “One of my very close friends who used to be my deputy for two years got shot down when he was delivering medical supplies to the city of Bucha,” she says. “It doesn’t make it any easier when you don’t have family there—because I have 44 million sisters and brothers who are hostages of this horrendous war.”

Kulesha and Nguyen are both involved with the Student Ukrainian Club, which has been organizing and mobilizing resources at Syracuse University and in the local community in support of Ukraine. The group recently launched a relief website with a list of links to donate to boots-on-the-ground Ukrainian organizations that are able to make a more immediate impact for Ukrainian soldiers and civilians.

“For people looking to make a monetary donation, we ask them to kindly prioritize the organizations that have a ground presence in Ukraine,” says Nguyen. Organizations vetted by the club include Save Life, Razom Emergency Response and the Leleka Foundation. “They understand what the needs are and can get supplies and resources into Ukraine far more quickly than some of the larger, more well-known NGOs [non-governmental organizations], which also generally benefit from much bigger and wider corporate giving support.”

The website outlines the group’s priorities to help the people of Ukraine: fundraising for tactical medicine, conducting advocacy and awareness campaigns on campus and beyond, and collecting and shipping humanitarian and other aid. They have already purchased and sent over 180 combat application tourniquets to Ukraine, which can be the difference between life and death.

“A human that is shot by a gun can bleed out in two-and-a-half minutes if they don’t have a tourniquet or a specialized bandage,” says Nguyen. “That’s the reality that Ukraine is living with. So we’ve collected our own resources and are reaching out to the greater community asking them for their support to purchase more.” On the website, the club also highlights additional ways individuals can help, including via in-kind donations and connecting the group with tactical medicine and gear producers who may be willing to make a corporate donation.

Addressing Misconceptions About the War

Another way Americans can support Ukraine is by learning more about the history of Ukraine and Eastern Europe to gain additional context to better understand the war.

“During my five years here, I’ve realized that Americans generally don’t know much about the history of Europe, so for them it’s hard to understand what’s going on,” says Kulesha. “This war didn’t start on Feb. 24, and it didn’t start in 2014. It didn’t even start in 1991, when Ukraine became independent [from the Soviet Union]. It started long before…for centuries, there have been many attempts by the Russian empire to either steal or destroy our language and culture.”

A Ukraine research guide compiled by the Syracuse University Libraries is a starting point for individuals seeking to enhance their background knowledge and current understanding of what is happening in Ukraine.

It’s also important to fact check news about the war and take in information from a wide range of sources to understand the full picture of the invasion. “Information needs to be checked because there is so much coming out that is unverified,” says Kulesha. “I encourage people to believe official sources and by official sources, I don’t mean the news. I mean statements by the government and statements by representatives of the groups who are on the ground in Ukraine. They are going to have a very different perspective than someone who is writing about it from far away.”

Nguyen says that she still reads news from Russian sources so that she can understand what their narrative of events looks like. “Despite the fact that I have so much fear and anger in me, I still watch their news, because it’s important for us to be informed and prepared to withstand Russia’s information war against Ukraine,” she says.

Ukrainians Will Fight Until the End

When asked what they wish everyone knew about Ukraine and its people, it is the nation’s long-held and deep commitment to its own freedom. “One thing I can tell you about Ukrainians is that we’ve always fought for our independence,” says Kulesha. “This is something which is in our blood. Ukrainians are born free and Ukrainians understand that.”

The long history of wars and attempts by colonizers to diminish Ukrainian sovereignty has instilled the value of independence in Ukrainian people, and Kulesha says there are many Ukrainian songs and sayings that reflect that value.

“One saying we have is ‘slaves are not allowed in heaven,’ which basically means that you have to fight for your freedom. We have a song that says, ‘crying didn’t give freedom to anyone and only the fighters will conquer the world,’” she says. “I feel like this is something in every Ukrainian—we are independent and very particular about this feeling of being free and not being a colony of a larger country. This is something that defines Ukraine.”

“We did not ask nor do we want to be in this situation,” Nguyen says. “But God bless that our people came together and took a fight, because if not, Russian troops could have been next to the NATO eastern border within days.”

“I know Ukrainians will stand for their freedom and they will fight until the end,” Kulesha adds.