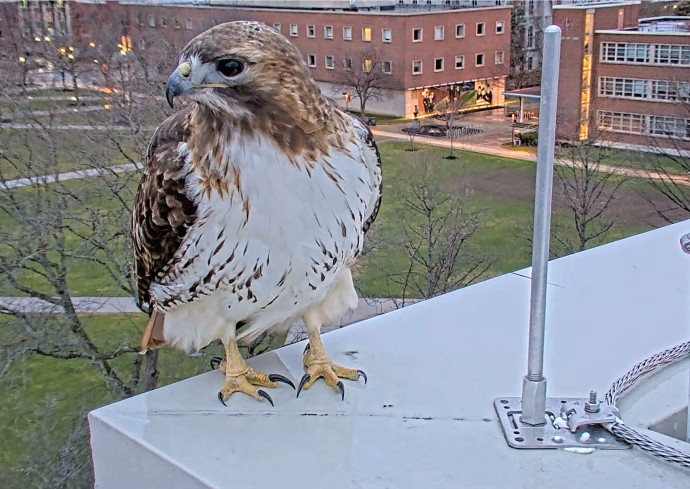 Viewers from around the world will once again have a bird’s-eye view of the red-tailed hawk pair, affectionately named SU-Sue and Otto, who have called the Syracuse University campus home since 2012. A 24/7 live feed hosted on the College of Arts and Sciences’ website is made possible thanks to alumna Anne Marie Higgins in memory of her husband, the Honorable Thomas W. Higgins, Jr., who died in 2009 after a brief battle with leukemia.

While in previous years viewers could tune in and watch SU-Sue and Otto’s nest-building activity on Lyman Hall starting in March, the pair decided to switch things up this season. They built a new nest in the north-facing archway of Bowne Hall after 10 years of nesting in Lyman Hall: eight years in the east-facing archway and then two years in the west-facing archway. As a result, Higgins generously provided funding for a new camera installed on Link Hall across from the nest to monitor the new nest location.

“Red-tailed hawks typically return to the same nesting site each year as evidenced by their first eight years on Lyman Hall east,” Higgins says. “However, their nesting habits are driven by survival and protection of their chicks so we must trust their decision to change their nest location three times, luckily, still within their territory [on the Syracuse University campus].”

According to Higgins, this is a special year for the the hawks as it marks the first time SU-Sue has laid a fourth egg since Higgins began watching the pair on the live feed in 2017. SU-Sue laid her clutch of four eggs on March 18, 21, 24 and 27, and viewers can follow along as the hawks incubate the eggs and raise the hatchlings until they fledge the nest, most likely in June. Higgins and a team of volunteer camera operators work around the clock to follow, document and capture the nesting activities of SU-Sue, Otto and their chicks.

Keeping up with the unpredictable nesting habits of this pair of red-tailed hawks is nothing new for Higgins. Soon after she began tracking the hawk family, Higgins funded the installation of two cameras in each archway on the east side of Lyman Hall in March 2017.

After nesting on the east side of the building for eight years, SU-Sue and Otto built a new nest on the other side of the building in March 2020. Syracuse University was scheduled to install a new camera in that archway, but the COVID-19 pandemic halted those plans. In June 2020, a camera was installed on Hinds Hall for a diagonal view facing the nest, and in February 2021, another new camera was installed directly above the nest in the Lyman Hall west archway. Both cameras, also funded by Higgins, allowed for close-up views and better tracking of the hawks’ location.

The new camera on Link Hall has a diagonal front view of the hawk nest but is unable to see into the nest cup to view the eggs like in past years.

“We’ll have to take cues from the parents to determine when the eggs hatch,” says Higgins. “That said, once the chicks grow, we’ll have plenty to watch in the nest and also be able to follow the parents and eventually the fledglings fly all over campus.”

For Higgins, tracking SU-Sue and Otto is a labor of love. She and her husband were avid bird watchers and hawks were their favorite raptor.

“In 2016, I heard that there was a red-tailed hawk nest at Syracuse University only 2.5 miles from my home,” says Higgins. “I drove to campus and caught my first glimpse of chicks in the nest and the parents perched on the Lyman Hall dome finial. From that day forward I have followed them and chronicle their lives on my Facebook Page, Red-Tailed Hawk Tales.”

Once the chicks leave the nest, they are called juvenile hawks or “juvies.” The parents will continue to provide food to the juvies through the summer while they hone their hunting and flying skills before they leave to be off on their own, usually in the fall. 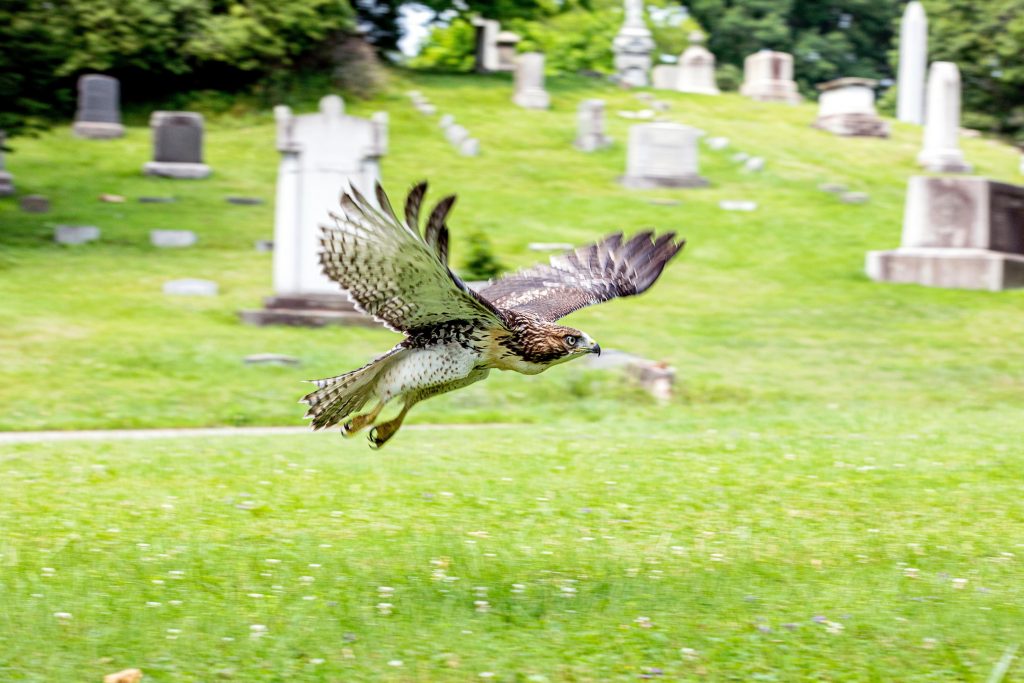 Ayla being released back into the wild at Oakwood Cemetery. (Photo by Jeremy Brinn)

Each hawk season brings with it a unique story, and last year was no exception. On July 5, 2021, Juvenile A (Ayla) was found on the Syracuse campus grounds unable to fly due a shoulder injury after hitting a window on the Heroy Geology Lab building. Higgins and another camera operator, DeAnn Buss, rescued the hawk and transported him to the Janet Swanson Wildlife Hospital in Ithaca, New York.

After ten days at the wildlife hospital and five days at Cindy Page’s wildlife rehabilitation center in Manlius, New York, Ayla was released back to his family at Oakwood Cemetery.

“Since 2016, four juvenile hawks have been injured by striking windows at Syracuse University, one fatally; I rescued three of them,” says Higgins. “As difficult as it is to see an injured hawk, we are so fortunate to have a skilled wildlife hospital and talented wildlife rehabilitator so close to us. I am also fortunate to be part of a collaborative team that includes Syracuse University who install signs on campus at fledge time with Public Safety’s number to call should anything happen to a hawk.”

The campus community and bird lovers everywhere are all truly fortunate to have this special glimpse into our very own hawk family. Be sure to tune in to the Nest Cam to follow this season’s adventures.

SU-Sue’s and Otto’s year-round hunting territory covers Syracuse University and the adjacent campus of SUNY College of Environmental Science and Forestry, the nearby Oakwood and Morningside cemeteries, Thornden Park and neighborhoods close to the University.