The S.I. Newhouse School of Public Communications announced the winners of the 2022 Toner Prizes for Excellence in Political Reporting late Monday during a pre-recorded ceremony featuring House Speaker Nancy Pelosi.

The Washington Post was the winner of the national Toner Prize, and The Atlanta Journal-Constitution won the local Toner Prize. 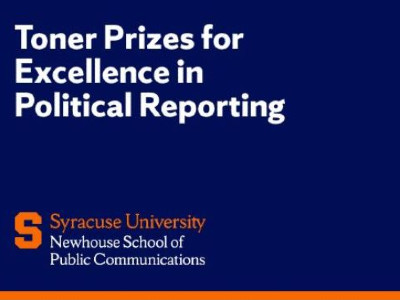 The Washington Post won for “The Attack.” The investigation into the causes, costs and aftermath of the Jan. 6, 2021 attack on the U.S. Capitol revealed how law enforcement agencies failed to heed mounting threats of violence in Washington, documented the bloody consequences of President Donald Trump’s rhetoric and mapped how a deep distrust of the voting process has taken hold across the country, shaking the underpinnings of democracy.

Said Toner judge Joseph B. Treaster: “This is a powerful, comprehensive look at the Jan. 6 attack on the Capitol, the developments that led to it, the moments of violence, the aftermath and what might lie ahead for America and Americans. The story shows many facets of a candidate who became a president and began trying to create a new form of government in America. It uses brilliantly all the tools of modern, digital journalism in a spectacular collaboration of reporters, editors, photographers and digital specialists.”

Toner judge Christina Bellantoni said, “It’s a terrific layout, a semester-long college course’s worth of information, with unbelievable multimedia and depth. It also connected the dots within government and went back far enough to show the true impact of Trump’s actions in great detail.”

The Atlanta Journal-Constitution won for “Inside the Campaign to Undermine Georgia’s Election.” The multipart digital package examined the period between the November 2020 presidential election and the Jan. 6 attack on the U.S. Capitol, when Georgia was at the center of the biggest election dispute of modern American history. The project shines a light on the actions of public officials and others who worked to change the outcome of the election and sow suspicion that persists today about the integrity of elections in Georgia. Reporters were David Wickert, Mark Niesse, Greg Bluestein, Maya T. Prabhu, Tia Mitchell, Isaac Sabetai and Jim Galloway.

Toner judge Maralee Schwartz said, “Superior work. The epic narrative and the embedded explanatory sidebars created a powerful portrait of the shocking events in Georgia and Washington as Trump obsessively pressured to undermine the election results in the state. They combine contemporaneous reporting with information gathered after individual events and from other sources—lots of depth.”

Toner judge Lynette Clemetson called it “a thorough reconstruction and a good read.”

About the Toner Prizes

The Toner Prizes were established by the Newhouse School in honor of late alumna Robin Toner ’76, the first woman to serve as national political correspondent for The New York Times.

The winners were announced online in a ceremony featuring an interview with House Speaker Nancy Pelosi, conducted by Molly Ball, national political correspondent with Time magazine. Ball, who won the Toner Prize in 2013, is the author of the bestselling biography “Pelosi.”

Judges were Christina Bellantoni, professor at the University of Southern California’s Annenberg School for Communication and Journalism, director of the Annenberg Media Center student newsroom and a former political reporter and editor at the Los Angeles Times; Lynette Clemetson, director of Wallace House, home of the Knight-Wallace Fellowships for Journalists and the Livingston Awards at the University of Michigan; Maralee Schwartz, retired political editor of The Washington Post; and Joseph B. Treaster, professor at the University of Miami’s School of Communication, a former New York Times correspondent and a contributor to The Times and other publications.